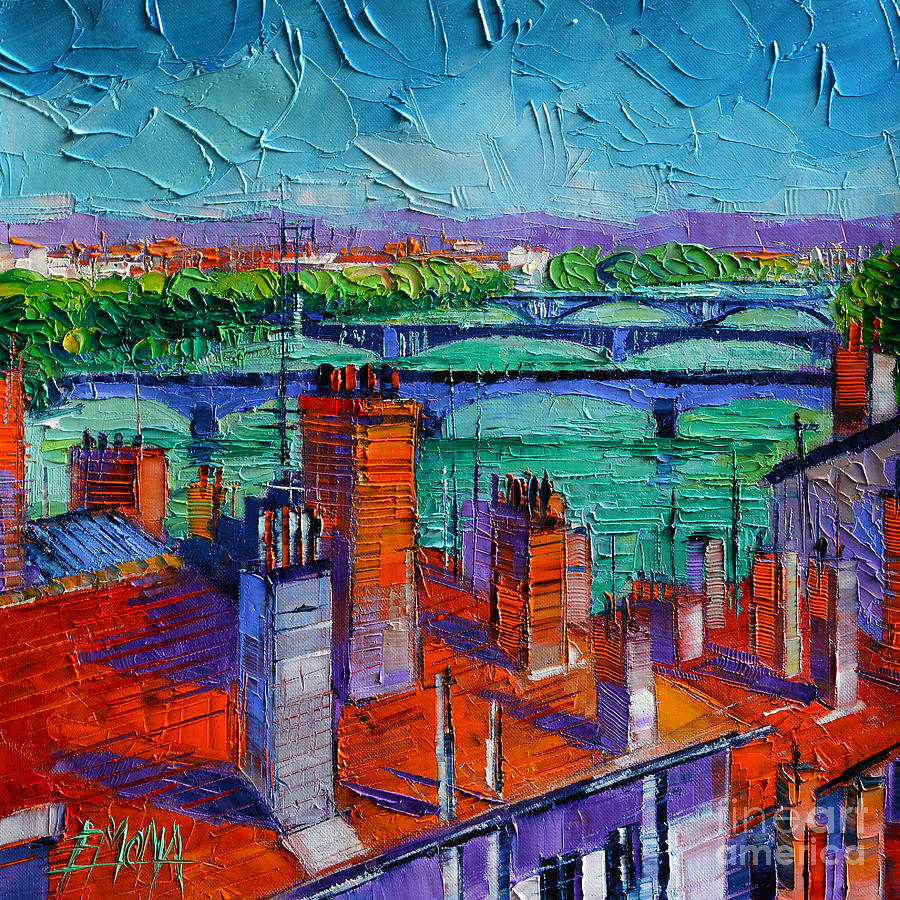 Bridges Of Lyon is a painting by Mona Edulesco which was uploaded on October 11th, 2015.

ORIGINAL PALETTE KNIFE OIL PAINTING ON CANVAS / 36x36 cm (14 x 14 inches) / 2015 / Inspired by the impressive view from Montee Bonafous in Lyon, over the Rhone and its bridges.
The painting is realized on linen, bonded on wood panel and framed with mat board.

Lyon has 29 bridges and footbridges - 16 on the Saone, 13 on the Rhone. Each having their own style, history, function and architect.
The particularity of Lyon bridges, especially on the Saone is the large number of bridges open only to pedestrians.

Lyon , traditionally spelt Lyons in English, is a city in east-central France in the Rhone-Alpes region, situated between Paris and Marseille. Etymologically it relates to the Celtic God Lugoves, Lugh as does Laon and Leiden. The residents of the city are called Lyonnais.
The city is known for its historical and architectural landmarks and is a UNESCO World Heritage Site. Lyon was historically known as an important area for the production and weaving of silk and in modern times has developed a reputation as the capital of gastronomy in France. It has a significant role in the history of cinema due to Auguste and Louis Lumiere, who invented the cinematographe in Lyon. The city is also known for its famous light festival 'Fete des Lumieres' which occurs every 8 December and lasts for four days, earning Lyon the title of Capital of Lights. (wikipedia)

I like the orangey red roofs. Bright and colorful. Lovely as one could ever imagine, Mona. FAV

Wonderfully done, Mona !!! Love the colors and composition so much !!! L/F

Superbe this painting of yours, Mona! Love the colors, the composition, everything! LF

I feel the slight chill of the long shadows from the cheminées. The cool water under the bridges and the purple haze of mountains in the distance contrast well with the roof tops, and the river connects them all! I really enjoy the couteau ŕ palette work in the sky too, Mona!

Thank you very much for your lovely comment, Brian. :)

amazing.. wow you are gifted.

Thank you very much, Wayne!

Wow, wow, WOW! I just love the texture you use with each color and space! So much to love about this piece Mona!

Thank you so much, Kathy! I am glad you like it!

Great contrast of color and perspective of the rooftops and bridges Mona! :)

Thank you very much, Patricia! :)

Beautiful work Mona--love the perspective, looking over the rooftops with the chimneys! f/v

Thank you very much, Bill!

Thank you very much, Jeffrey!

Thank you very much, Artistic Panda!

Nina, thank you very much for the feature in the ART - IT IS GOOD FOR YOU group!

Colette, thank you so much for the feature in PAINTS AND ART PHOTOGRAPHY group!

Colette, thank you so much for the feature in COLORS BLUE TURQUOISE PHOTOGRAPHY AND PAINTS group!

Evie, thank you very much for the feature in IMAGES OF EUROPE group!

Robert, thank you very much for the feature in FIRST FRIDAY GALLERY GROUP 1X DAY group!

Christina, thank you very much for the feature in the PAINTING CAFE group!

OH HAPPY Day!!! This photo makes me feel happy! So happy that it's been featured on the Oh Happy Day group homepage. Thank you for growing my smile today! F/L/T

Jacqueline, thank you very much for the feature in OH HAPPY DAY group!