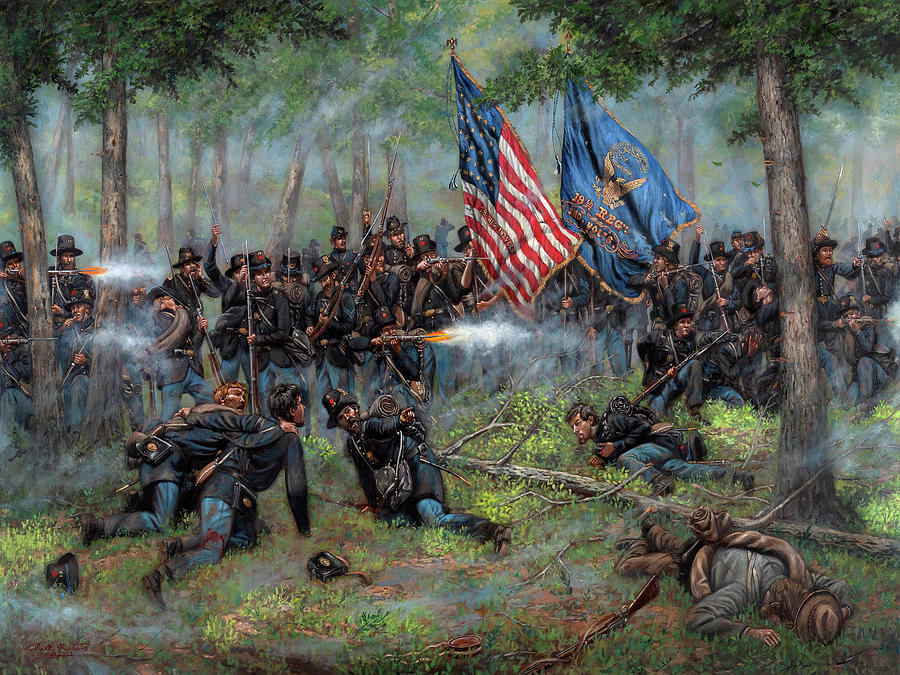 Brothers of War - The 19th Indiana Infantry at Gettysburg is a painting by Mark Maritato which was uploaded on February 14th, 2021.

Brothers of War - The 19th Indiana Infantry at Gettysburg

The 19th Indiana of the legendary Iron Brigade fight in the Herbst (McPherson's) Woods near Willoughby Run on July 1st 1863. As part of the famed... more

Brothers of War - The 19th Indiana Infantry at Gettysburg

The 19th Indiana of the legendary Iron Brigade fight in the Herbst (McPherson's) Woods near Willoughby Run on July 1st 1863. As part of the famed Iron Brigade, the Nineteenth Indiana regiment gained a reputation for its courage, bravery, and sacrifice. Consisting of five “western” regiments from Wisconsin, Michigan, and Indiana, the Iron Brigade was one of the most storied fighting units of the American Civil War. At Gettysburg, the Iron Brigade arrived on the northwest outskirts of town with approximately 1,850 men. The soldiers who fought with the Iron Brigade that horrible day fought bravely despite overwhelming numbers and having to defend inferior ground. During the first day’s fighting on July 1, 1863, the Iron Brigade suffered an estimated 1,212 casualties… the highest percentage of casualties of any brigade during the entire Civil War. Colonel Samuel J. Williams, who led the Nineteenth Indiana at the Battle of Gettysburg, wrote one month later that of the 288 soldiers in the Nineteenth who were engaged at Gettysburg, 210 were casualties. One company of the Nineteenth, Company B, started the day with thirty-two men. By the end of the day, only five remained. Among those wounded at Gettysburg was Brigadier General Solomon Meredith, the Iron Brigade’s commander and the Nineteenth Indiana’s original colonel. Solomon Meredith, who as a young man had walked from North Carolina to Indiana to start a new life, was reportedly referred to by President Lincoln as his “only Quaker general in the Army.” At Gettysburg, after General Meredith’s horse was shot from underneath him and the general himself was struck by a shell fragment, Meredith was trapped under his horse and unconscious before being removed from the battlefield. He suffered a severe head wound, broken ribs, and a broken leg.

This painting was a private commission.