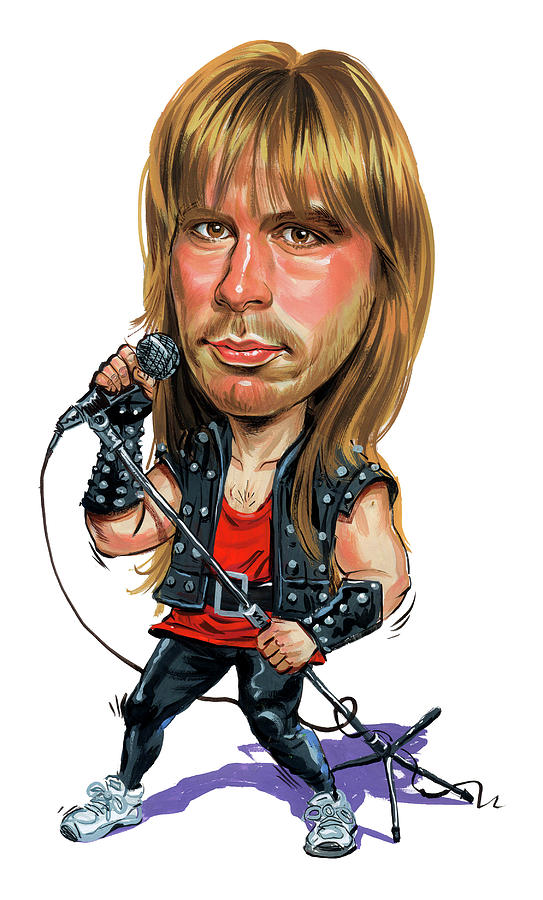 Bruce Dickinson is a painting by Art which was uploaded on June 1st, 2011.

Paul Bruce Dickinson (born 7 August 1958) is an English singer, songwriter, airline pilot, fencer, broadcaster, author, screenwriter, actor and former marketing director, best known as the lead vocalist of the heavy metal band Iron Maiden. Dickinson began his career in music fronting small pub bands at school and University, including Styx (not the American band of the same name) in 1976, Speed, (1977�1978), and Shots in early 1979. He then joined the band Samson later in 1979, where he gained some popularity under the stage name, "Bruce Bruce." He left Samson in 1981 to join Iron Maiden as their new vocalist, replacing Paul Di'Anno, and debuting on their 1982 album The Number of the Beast. During his first tenure in the band, they issued a series of high impact releases, resulting in Dickinson gaining worldwide fame, and becoming one of the most acclaimed heavy metal vocalists of all time. Dickinson quit Iron Maiden in 1993 in order to pursue his solo career, being replaced by Blaze Bayley, which saw him experiment with a wide variety of heavy metal and rock styles. Dickinson rejoined Iron Maiden in 1999 along with guitarist Adrian Smith, and with whom they have gone on to release four further studio albums. Since then, Dickinson has only released one more solo record, Tyranny of Souls. He is the older cousin of Rob Dickinson, former lead singer of British alternative rock band Catherine Wheel. His son, Austin, is the lead singer in metalcore band Rise to Remain. On 19 July 2011, Dickinson was presented with an honorary music doctorate from Queen Mary College, in honour of his contribution to the music industry. Source: Wikipedia

Congratulations on your recent Sale!!