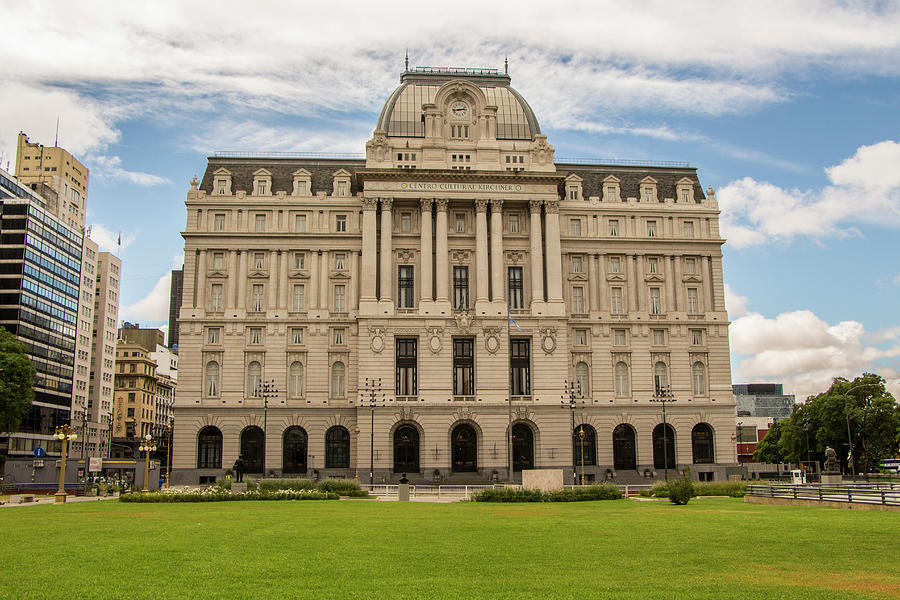 Buenos Aires Central Post Office is a photograph by Venetia Featherstone-Witty which was uploaded on November 23rd, 2020.

The need for a new central post office in Buenos Aires was first raised in 1888 by the director of the Correo Argentino (Argentine Postal Service) at... more

The need for a new central post office in Buenos Aires was first raised in 1888 by the director of the Correo Argentino (Argentine Postal Service) at the time, Dr. Ramón J. Cárcano. Later that year a Congressional bill providing for its construction was signed by President Miguel Juárez Celman. The Ministry of Public Works commissioned French architect Norbert Maillart for its design in 1889.
Designating a 12,500 m² (134,000 ft²) city block on the corner of Leandro Alem and Corrientes Avenues for its construction, the Public Works Ministry chose the site as a means to beautify a land reclamation site where the shores of the Río de la Plata had reached just a decade earlier. The sudden onset of the Panic of 1890 and the subsequent crisis led to President Juárez Celman's resignation, however, as well as to the project's suspension.
The national government revived the plans only in 1905, and in 1908 Maillart returned to Buenos Aires, where his new plans for a larger post office were approved the following April. Differences later arose between Maillart and the Argentine government, and the French architect abandoned the project in 1911. Construction, which had just started, was then left to the supervision of Maillart's chief assistant, Jacques Spolsky. Spolsky reengineered the design, which featured masonry supports, to consist of a steel-reinforced concrete structure, for which 2,882 steel pillars were placed onto the bedrock, 10 m (33 ft) deep.

Limitations on the city's public works budgets resulting from the onset of World War I forced another major design alteration in 1916. The planned construction of an elevated causeway on Leandro Alem Avenue was cancelled, and a mezzanine was quickly added to the plans to compensate for an entrance which would now be one floor below the original's. Spolsky achieved this without substantial changes to the building's exterior, though the number of delays led to considerable cost overruns on the project, and its budget was exhausted in 1923.[7] President Marcelo Torcuato de Alvear, however, obtained Congressional support for a new appropriation, and on September 28, 1928 (two weeks before the end of Alvear's tenure), the new Secretaría de Comunicaciones was inaugurated.

The building's eclectic design, drawing prominently from French Second Empire architecture, was typical of the public buildings and upscale real estate built in Buenos Aires and other Argentine cities early in the 20th Century. Despite their differences, Maillart went on to design the Buenos Aires National College and the Argentine Supreme Court, and Spolsky designed post offices for Rosario and San Miguel de Tucumán in a similar style while at work on this structure.

The largest public building completed in Argentina up to that point, the building measured eight stories and 60 m (200 ft) in height and included over 88,000 m² (948,000 ft²) of indoor space. The central hall was decorated with marble throughout, features stained glass windows, numerous bronze sculptures and mail drop boxes, and a four-story-high domed ceiling.
This building is now The Kirchner Cultural Centre (Spanish: Centro Cultural Kirchner) is a cultural centre located in Buenos Aires, Argentina. It is the largest of Latin America, and the third or fourth largest in the world.

It was opened on May 21, 2015, and is located in the former Buenos Aires Central Post Office ("Palacio de Correos"). The cultural centre was named after former president of Argentina Néstor Kirchner, who oversaw its conversion.

The nine-floor centre has a concert hall; five other auditoriums for theater and concerts; 18 halls for poetry readings, performance art, and other events; 40 rooms of art and history galleries totaling 15,000 square meters on six floors; 16 rehearsal rooms; and two rooftop terraces.It is possible to reach the centre with Line B and Line E of the city's underground, at Leandro N. Alem and Correo Central respectively.
FEATURED 11/24/20 in "Images That Excite You"
FEATURED 11/24/20 in "Your Very Best Photography"
FEATURED 11/25/20 in "Lady Photographers"
FEATURED 11/27/20 in "New FAA Uploads"
FEATURED 12/3/20 in "No Place Like Home"

Congrats on your feature in No Place Like Home Group!

Congrats on your feature in No Place Like Home Group!

Thank you very much Maryse!

Thank you very much for the feature and for your continued support :)