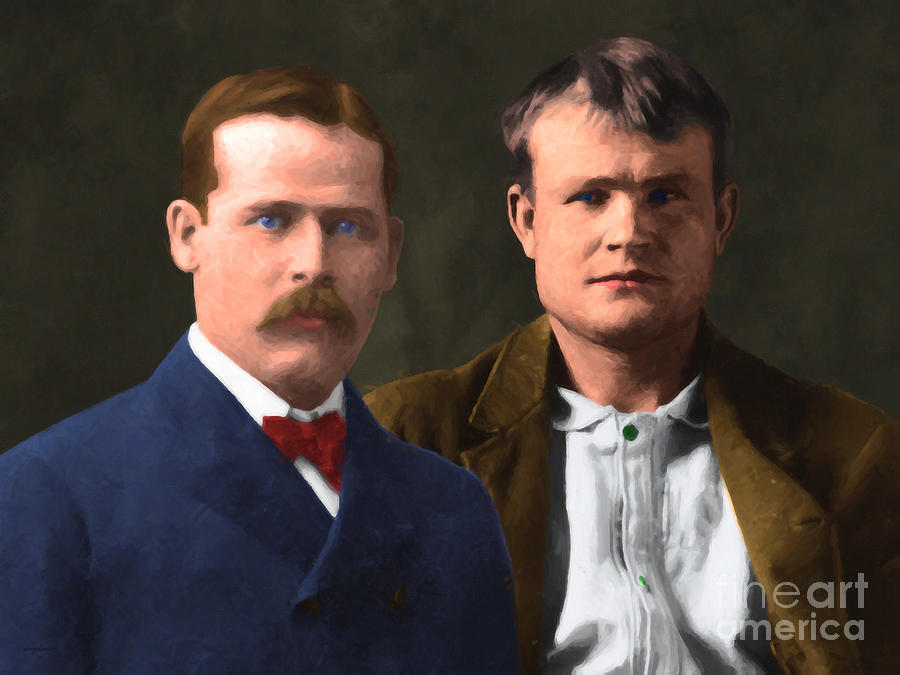 Butch Cassidy And The Sundance Kid 20130512 V3 is a photograph by Wingsdomain Art and Photography which was uploaded on May 13th, 2014.

Gunfighter and gunslinger are literary words used historically to refer to men in the American Old West who had gained a reputation of being dangerous with a gun and had participated in gunfights and shootouts. Gunman was a more common term used for these individuals in the 19th century. Today, the term "gunslinger" is now more or less used to denote someone who is quick on the draw with a pistol, but can also refer to riflemen and shotgun messengers. The gunfighter is also one of the most popular characters in the Western genre and has appeared in associated films, video games, and literature. Gunfighters range from different occupations including lawman, outlaw, cowboy and duelist, but are more commonly synonymous to a hired gun who made a living with his weapons in the Old West. A cowboy is an animal herder who tends cattle on ranches in North America, traditionally on horseback, and often performs a multitude of other ranch-related tasks. The historic American cowboy of the late 19th century arose from the vaquero traditions of northern Mexico and became a figure of special significance and legend. A subtype, called a wrangler, specifically tends the horses used to work cattle. In addition to ranch work, some cowboys work for or participate in rodeos. Cowgirls, first defined as such in the late 19th century, had a less-well documented historical role, but in the modern world have established the ability to work at virtually identical tasks and obtained considerable respect for their achievements. There are also cattle handlers in many other parts of the world, particularly South America and Australia, who perform work similar to the cowboy in their respective nations. -wikipedia


Painterly Style photo art have a lively colorful brush stroke texture in the tradition of master painters. Zoom in on an area of the image to see the artistry of this style. This type of artwork would look terrific on a large canvas, and a print on any other media would look just as stunning!

Robert Leroy Parker (April 13, 1866 November 7, 1908), better known as Butch Cassidy, was a notorious American train robber, bank robber, and leader of the Wild Bunch Gang in the American Old West. After pursuing a career in crime for several years in the United States, the pressures of being pursued, notably by the Pinkerton Detective Agency, forced him to flee with an accomplice, Harry Alonzo Longabaugh, known as the Sundance Kid, and Longabaugh's girlfriend, Etta Place. The trio fled first to Argentina and then to Bolivia, where Parker and Longabaugh were probably killed in a shootout in November 1908. -wikipedia

Harry Alonzo Longabaugh (1867 November 7, 1908), better known as the Sundance Kid, was an outlaw and member of Butch Cassidy's Wild Bunch, in the American Old West. Longabaugh likely met Butch Cassidy (real name Robert Leroy Parker) after Parker was released from prison around 1896. Together with the other members of "The Wild Bunch" gang, they performed the longest string of successful train and bank robberies in American history. After pursuing a career in crime for several years in the United States, the pressures of being pursued, notably by the Pinkerton Detective Agency, forced Longbaugh, his girlfriend Etta Place and accomplice Robert Leroy Parker (a.k.a. Butch Cassidy) to abandon the United States. The trio fled first to Argentina and then to Bolivia, where Parker and Longabaugh were probably killed in a shootout in November 1908. -wikipedia