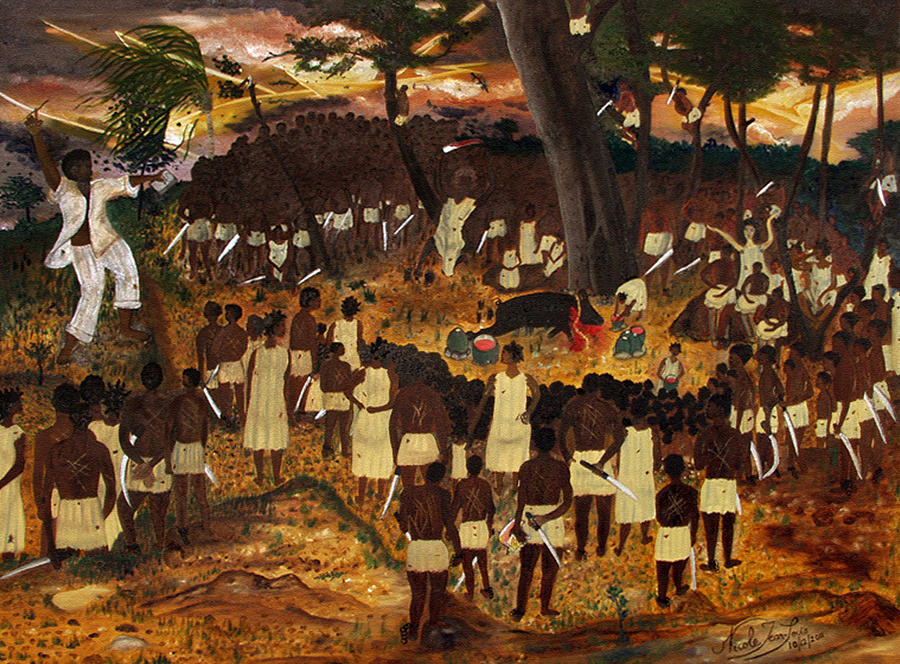 Bwa Kayiman Haiti 1791 is a painting by Nicole Jean-Louis which was uploaded on October 15th, 2011.

Bwa Kayiman derives his name from the French Bois Caiman. Others suggest a Creole derived name, Bois Kay Iman or Woods by the House of Iman. Bwa... more

Extraordinary! piece of history and full of strength!!

You could write a book using your illustrations from this painting. It is a great part of history that all should learn. Thank you for teaching something that I did not know. The story alone could make an exciting movie!

I think the description adds so much to an already exceptional painting. Brilliant!

Thank you very much Betsy!

Your work gives a visual I-story of the wonderful people of this nation. I respect and love it. Peace, O.

Thank you so much, O, for your encouraging and wonderful comment! :})

Great composition in this piece. I love how you use the contrasts to outline the characters within a dark (and difficult) palette. A work full of strength. Awesome!! L/V

Wow! Thank you very much Angeles for your wonderful comment!

Wow! A very powerful and beautiful work of art that tells a story of great historical significance, Nicole! Amazing! L/F

Thank you so much Hazel!

I am glad I followed up on this. This is an important historical piece.

Welcome to my site Jim. I am pleased of your visit. I greatly appreciate your positive comment!

What a powerful story-telling image.

Welcome to my site Roy! Thank you very much!

Welcome to my site Vilas! Thank you very much!!

Thank you so much, Omar!

An eye awakening story painting, thank you for sharing this with us all. Amazing art Nicole

Thank you so much, Nancy. I greatly value your appreciative comment.

Welcome to my site, Johnson! I greatly appreciate your comment.

Nicole, I am here again to admire this and your other outstanding and meaningful works of art. Thanks for your kind comments. F/V

Thank you very much Anne! I value your comment.

Nicole , this is one of those paintings and piece of history I think about often. Both your painting and your description are very informative. Another vote for this work of art. v/f/tweet

Thank you so much, Bob!! I greatly appreciate your visit.