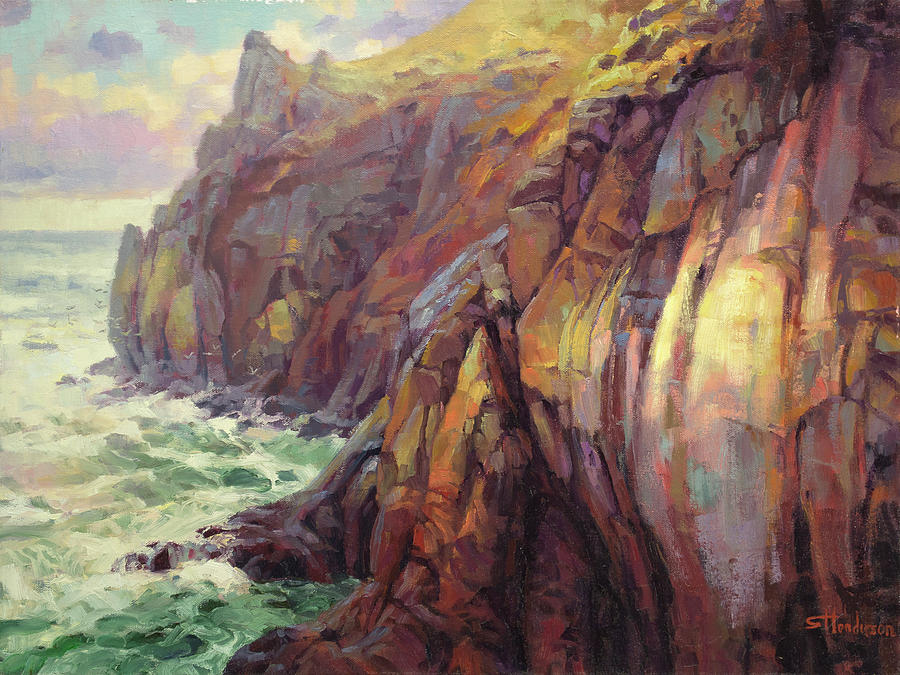 Cascade Head is a painting by Steve Henderson which was uploaded on March 17th, 2017.

The sea claims its space as tide reaches its peak.

Cascade Head on the central Oregon Coast is one of those places of grandeur and majesty, a... more

The sea claims its space as tide reaches its peak.

Cascade Head on the central Oregon Coast is one of those places of grandeur and majesty, a seascape that one views from above and marvels what it would be like to be a bird, and perch on the rocks below. At high tide, the waves crash into the rocks, casting spray high into the air and atmosphere.

Cascade Head, the artwork, invites the viewer to become as a bird and soar overhead, looking into the roiling, boiling water of the surf. The sound is powerful and intense, every so often creating a “boom!” as the water crashes into an enclave of the rocks.

It is a reminder to us of the majesty of the sea – as with the character Aslan in the Narnia Chronicles, who is constantly described as, “not a tame lion,” the ocean is not a quiet, predictable body of water. While there are times that the water is calm, reflecting the sunlight from the sky above, conditions change quickly with the weather and the tide, and what was placid a short few minutes ago is now active and moving, almost violent in its scope.

There is a reason people are cautioned to never turn their backs on the sea, and this respect for the ocean is a good thing – in marveling at the power and beauty of nature, we put the trivial pursuits of “modern life” in perspective. An office cubicle, where too many people spend too much time being anxious about matters that really don’t matter, does not begin to compare to the rugged cliffs of a place like Cascade Head.

Carpeted walls or rocky crags? The one will far outlast the other, and the regularity of the tide as it pulls out and crashes in commands a respect and awe that far exceeds that of any staff meeting.

It's a powerful and wonderful piece of work。

Love the colors in this beautiful coastal image! LFT

Love it wonderful beautiful painting, and congrats your sold!

To the recent buyer from California: May the wonder and beauty and mystery of Nature bring you a sense of tranquility and peace. Enjoy!

Thank you, Ica, for taking time to enjoy.

what play of light - Congrats on your sale!

Congrats STEVE on the Sale of your great painting ! :-)