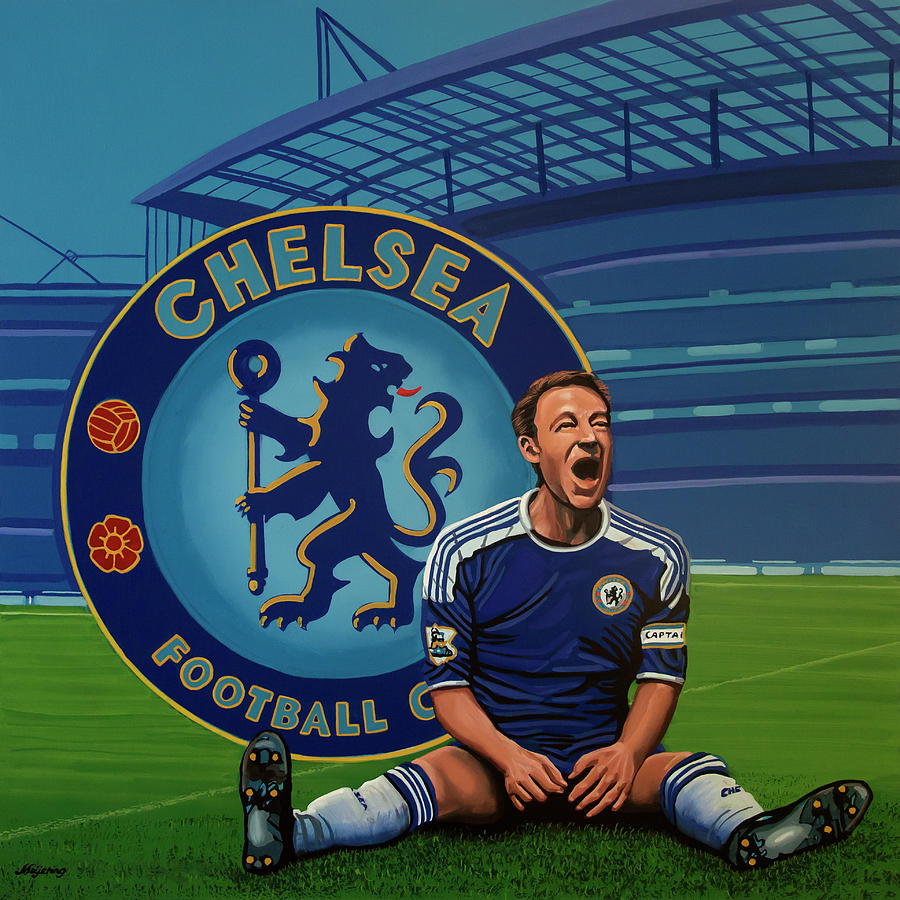 Chelsea London Painting is a painting by Paul Meijering which was uploaded on September 20th, 2017.

Realistic acrylic painting of the English professional footballer John Terry at Chelsea, painted by the Dutch fine artist Paul Meijering - the Original painting is 90 x 90cm and for sale

Chelsea Football Club is a professional football club based in Fulham, London, England that competes in the Premier League, of which they are reigning champions. Founded in 1905, the club's home ground since then has been Stamford Bridge.

Chelsea had their first major success in 1955, when they won the English league championship. They then won various cup competitions between 1965 and 1971. The club's greatest period of success has come during the last two decades; winning 21 trophies since 1997. Chelsea have won six national league titles, seven FA Cups, five League Cups and four FA Community Shields, one UEFA Champions League, two UEFA Cup Winners' Cups, one UEFA Europa League and one UEFA Super Cup. Chelsea are the only London club to win the UEFA Champions League, and one of five clubs and the first British club, to have won all three of UEFA's major club competitions.

John George Terry (born 7 December 1980) is an English professional footballer who plays for and captains Championship club Aston Villa. He commonly plays as a centre-back. He was previously captain of Chelsea and the England national team.

A strong, tenacious, commanding and physical defender, Terry excels in the air and is known for his aggressive tackling, positioning, leadership and his ability to read the game; he is considered to be one of the greatest central defenders of his generation. Terry was named UEFA Club Defender of the Year in 2005, 2008 and 2009, PFA Players' Player of the Year in 2005, and was included in the FIFPro World XI for five consecutive seasons, from 2005 to 2009. He was also named in the all-star squad for the 2006 FIFA World Cup, the only English player to make the team.

Terry is Chelsea's most successful captain, having led them to five Premier League titles, four FA Cups, three League Cups, one UEFA Europa League and one UEFA Champions League title since 2004. He is one of five players to have made over 500 appearances for Chelsea and is also the club's all-time highest scoring defender. In 2007, he became the first captain to lift the FA Cup at the new Wembley Stadium in Chelsea's 1-0 win over Manchester United, and also the first player to score an international goal there, scoring a header in England's 1-1 draw with Brazil. In his final season at Chelsea in 2017, he became the first ever player to captain a team to the Premier League title on five occasions.

F/L. You are featured in the Welcome Fine Artists group today, July 13, 2020. Out theme is "Tell Me A Story", and you shared a great story. CONGRATULATIONS!

CONGRATULATIONS!! Your impressive artwork has been Featured by the - ABC Group - Be Sure to archive it in the Feature thread LF