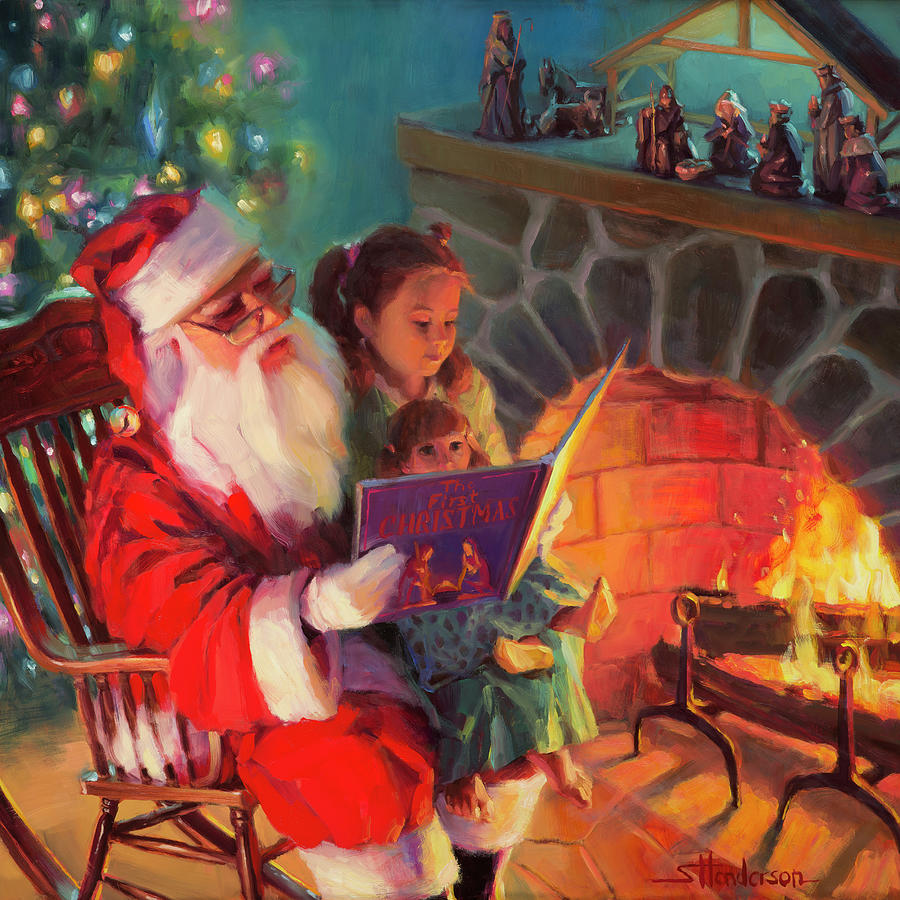 Christmas Story is a painting by Steve Henderson which was uploaded on April 26th, 2017.

There is always a time for a story.... more

There is always a time for a story.

Even on Santa’s busiest night – maybe because it’s his busiest night – Father Christmas takes time from his rounds to sit in a chair, pick up a book, and read to a young child who, for some reason, is still up.

And is it any wonder that a young child finds herself unable to sleep on Christmas Eve?

How surprised she must have been, after sneaking downstairs and hiding near the Christmas tree, to hear the thumps and bumps overhead, and then the sound of Santa entering her own, her very own house!

But maybe she wasn’t that surprised, at least as surprised as an adult would be, because a child – unlike an adult – believes that the impossible can and does happen.

And so the two settle down before the fire for the reading of a story, a most important story, a story more important than even Santa because it is the story of the first Christmas, of a baby and his parents who were too poor and too umimportant (in the world’s eyes) to be able to secure decent lodgings for a most momentous night.

This is a story worth taking time to savor, to contemplate, to slowly read and enjoy. Watched over by the characters of this first story, lovingly set up on the mantlepiece, the little girl, her doll, and Santa Claus enter into a world of beauty and joy and goodness.

The artwork, Christmas Story, invites the viewer to join the child and the doll and Santa – to stop whatever hurry and scurry and holiday preparations are going on and to take time to sit by the fire, feel its warm glow, and listen to Santa’s deep, gentle voice reading the words that matter.

Isn’t it intriguing how the characters of that story, people who were so unimportant that no one in the world knew what was going on that night, have become part of a story that the whole world knows?

Congratulations on your Top Finish in the ABC Y… contest! Fl

Congratulations on your tie for 3d in the Y Is For Yearly contest!

Congratulations, Steve on your HIGHLIGHT ARTISTS FOR THE WEEK in WFS Group !

CONGRATULATIONS! It is my great pleasure to FEATURE your artwork on the homepage of The Artists Group, 11/24/2020! You are invited to post it in the Group's Features Discussion thread for posterity or any other thread that fits!

Congratulations your outstanding artwork has been featured on the leading page of Impressionism group! Feel free to visit the group and view it there as it has been carefully arranged and displayed on our gallery wall. Also, please add it to the featured art archive or any of the catalogs that your artwork is suited to in the group’s discussions. Excellent Work! Lori

Congratulations, your beautiful artistic work is Featured on the home page of the "Bedroom Art Gallery" group. 11/22/20 l/f/pin

Adorable rendition of a happy Christmas

Congratulations on your Highlight Artist of the Week Feature in WFS!

Congratulations on your HIGHLIGHTED FEATURE in WFS! Lvf

Spectacular detail, color and light, Congratulations on your Highlight Artist of the Week Feature in WFS!!...L

Congratulations for your featured image in the Semi Abstract - 1 A Day group!

Congratulations for being one of our present SPECIAL HIGHLIGHTED ARTISTS, as you are very deserving of this special honor. Check it out on top of the Homepage of our site. It surely is a true honor to FEATURE THIS BEAUTY ON OUR HOMEPAGE! Your talents and love for art are surely dominant in this beautiful piece of outstanding art work! Thanks so very much for sharing, so we may enjoy and adore the beauty within! LIKED AND FAVED Randy B. Rosenberger (admin of WFS group) http://fineartamerica.com/groups/wisconsin-flowers-and-scenery.html

Congratulations on your feature in the Soul of an Artist

Congratulations. Your wonderful painting is now featured on Over 3000 Views home page. I am proud to display your talents. Please post it in the appropriate discussion threads for more exposure.

Congratulations your work has been featured on aRt diSTriCt groups homepage! Bravo! Be sure to share your image in the groups Featured Archive discussion!

One of your peers nominated this image in the 1000 views Groups nominated images by your fellow artist in the Special Features #16 promotion discussion. Please visit and pass on the love to another artist.....L/F/Tw