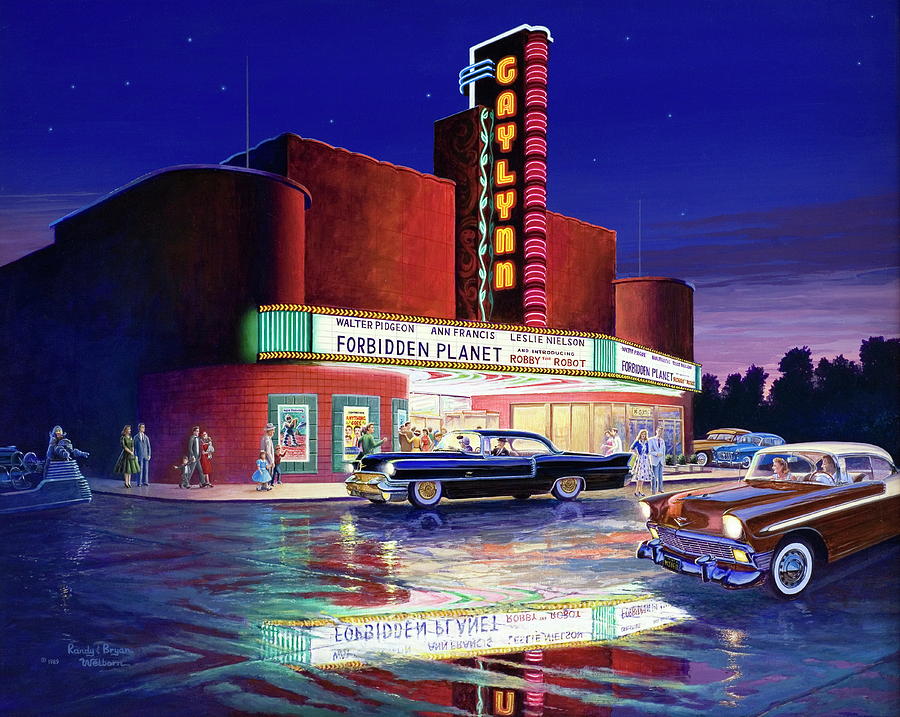 Classic Debut - The Gaylynn Theatre is a painting by Randy Welborn which was uploaded on March 23rd, 2018.

The opening night program at the Gaylynn Theatre, Friday, November 18, 1949, boasted of everything from a colorful and sparkling refreshment center... more

The opening night program at the Gaylynn Theatre, Friday, November 18, 1949, boasted of everything from a "colorful and sparkling refreshment center" to a revolutionary "eye-level balcony". There were "push back seats", "seat phones" for the hard of hearing and a glass enclosed "cry room."

This scene is a few years later; specifically, June 22, 1956. In those days the movies changed twice a week. "Forbidden Planet", the debut film for both Ann Francis and Robby the Robot, would not be "held-over" but thirty years later would be considered as a classic sci-fi flick. Among the classic cars depicted is a '56 Cadillac Eldorado and a little Nash Rambler ... beep beep!

The Gaylynn Theatre started with one large screen. In its latter years, the owners added a second small screen where the balcony once was. Unfortunately, the theater could not compete with modern, multiplex cinemas and has been out of use for many years. It was demolished in August of 2002. Remember this theater in all its splendor. Order a print of this painting for your home or office today.

Notes from the artist:

When I did the research for the South Park Drive-In Theatre I noticed that Forbidden Planet would be starting the next day at the Gaylynn Theatre; along with "the Day the Earth Stood Still", "Invasion of the Body Snatchers" and "The Incredible Shrinking Man", it remains a true classic SCI-FI flick.

Forbidden Planet was based on William Shakespeare's play "the Tempest" - which was written in 1611, so I used that as one of my hidden trivia treasures. While the '56 Cadillac Eldorado was a favorite of mine, the '56 Chevy Bel-Air was more in my realm of possible possessions and indeed my Dad did have one!

When the Gaylynn Theatre was being demolished I managed to retrieve some of the red tile; having already obtained a piece of the classic neon sign. Robby the Robot seems to have made it to his Beaumont premier showing.

Your artwork is awesome ... love it. The detailed description and background of each painting adds such a delightful touch, I feel like I am there. Very interesting reading. It will take me awhile to get through each one. Happy painting ... Flo