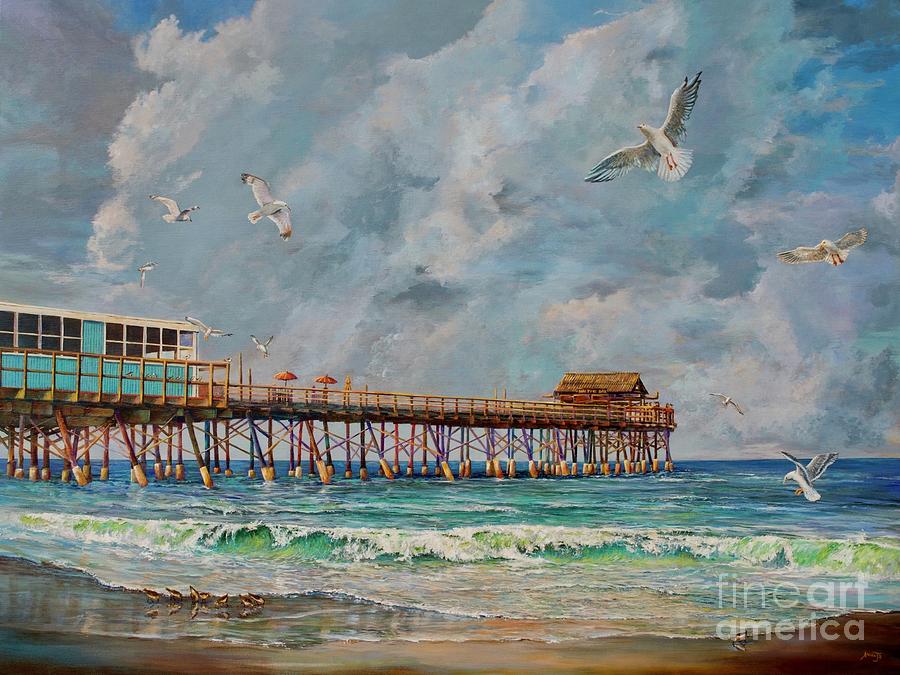 Cocoa Beach Pier is a painting by AnnaJo Vahle which was uploaded on May 9th, 2019.

I was in the mood to paint a big sky painting. That is how this one began. Once I had the sky, which was originally one of some big cumulous clouds, I needed to come up with a foreground. It seemed that the canvas told me that a beach would be good. Sooooo....I painted a beach with similar grays and blues of the sky. As I continued to look at the painting, I was unsatisfied with it. It didn't seem particularly interesting. I remembered that I had recently seen the pier burning down. I, also, remembered that I had taken some photographs of it not too terribly long ago. I looked through the photos and made some adjustments to the proportions to make it fit the canvas in a pleasing manner. Essentially, I shortened it a bit. I didn't want to make it as long as it really was because that would mean that the pier would need to be further in the background to completely fit the painting. I, also, didn't want to make it much more close up because that would make it more important than the sky. I really wanted to make the sky the primary subject.

As I painted the pier, it seemed too dark and gloomy. That made the sky look all wrong. They didn't really go together. I lighted the pier and made it more colorful. I didn't try to be absolutely realistic but impressionistic. That helped but still didn't go with the sky. Okay, the sky needed to change. I totally repainted the sky and changed it to bigger clouds. Of course, that meant that I had to again repaint the pier to harmonize that with the sky. Hmmmm....it still needed something to help pull it together. I added the little sandpipers in the foreground and reflected them on the wet beach. The canvas still told me that it needed more. I began to add gulls sitting on the pier railings. It still needed more. I added the flying gulls. One by one, I kept adding them until I was satisfied that there were enough.

Now, I wasn't quite satisfied with the waves and the water. I lightened and brightened the colors with various shades of green That helped. I had begun the painting while I was feeling in a funk because of my latest exacerbation with Multiple Sclerosis. When I finally signed it, I was feeling much better.

Built in 1962 by local businessman Richard Stottler, the Westgate Cocoa Beach Pier is a historical landmark on the Space Coast. Stretching 800 feet over the Atlantic Ocean, the Pier (originally known as “Canaveral Pier") was constructed with more than 2.5 miles of boardwalk planks and 270 pilings, each 40 feet in length. Since the beginning, the Pier has been a favorite of both locals and tourists, and has undergone many changes over the years. Longtime locals reminisce of the days in the early 1960s when visitors could drive their cars right up onto the Pier itself. The Pier also offered a “grandstand seat" for Mercury, Apollo and Space Shuttle launches at nearby Cape Canaveral (which was known as “Cape Kennedy" in honor of President John F. Kennedy between 1963 and 1973). Famous astronauts such as Alan Shepard, the first American in space, reportedly visited the Pier.
In addition, Cocoa Beach evolved into the “Surfing Capital of the East Coast" and the Pier became the center of surfing activity, drawing the likes of Dick Catri (widely considered the “Godfather of East Coast Surfing"), as well as Cocoa Beach native and 11-time world champion Kelly Slater. In fact, one of the original Ron Jon Surf Shops opened directly on the Pier in 1963 (the small surf shop flourished and Ron Jon owner Ron DiMenna moved to a bigger location at Ron Jon's present location at State Road 520 and A1A). The first Easter Surfing Festival was held in 1964. In the early 1970s, the Pier was also home to a bustling dance club called Asylum, which boasted a cosmic lighted dance floor and live rock music. Many musical acts have played at the Pier over the years such as Bachman-Turner Overdrive, The Edgar Winter Group, The Beach Boys, A Flock of Seagulls, UB40, Ratt, Ziggy Marley, Maxi Priest and others.
In 1983, the Pier underwent a $2 million remodeling and expansion, which included the opening of the award-winning Pier House Restaurant (now known as the Atlantic Ocean Grille). Over the years, the restaurant has been awarded “Best in Brevard" and “Best Restaurant with a View" numerous times by Florida Today newspaper readers. In 1984, the Pier changed its name from Canaveral Pier to its present name, Cocoa Beach Pier. The first Cocoa Beach Fest was held at the Pier in 1989.
Today, the Pier draws more than one million visitors annually and is home to four restaurants, five tropical bars, gift shops and boutiques. The Pier is also the site of immensely popular annual surfing, fundraising and social events. In the spring of 2014, David Siegel, President and CEO of Westgate Resorts, and his longtime business associate Jim Gissy purchased the Pier from the original owners, the Stottler family. Both men have strong ties to the Central Florida region and look forward to continuing and enhancing the wonderful traditions of the Cocoa Beach Pier.
As of 2017, David Siegel and Jim Gissy have invested over $4 million transforming and reimagining the pier as a family-friendly world-class tourist attraction. The expanded Rikki Tikki Tavern sitting 800 feet over the Ocean is the premier dining experience in all of Brevard County.

Gorgeous painting of the Cocoa pier and beach area!!!

Thank you so much, Deborah.

Congratulations, AnnaJo, on your win in the Floridays Contest for this beautiful painting! Voted!

Thank you very much, Sarah.

Thank you, David. I am delighted.

THE MASTERS GROUP OF ARTISTS HAS SELECTED YOUR ARTWORK FOR ITS UNIQUE COMPOSITION. CONGRATULATIONS ON YOUR FEATURE. l/f

Thank you very much, Debora. I am delighted and honored.

A really lovely sky with great drama to compliment the scene I also love the waves. Great work AnnaJo. LF.

Thank you very much, Rita.

Thank you Barbara. I appreciate your visit.

Now this received my attention AnnaJo! Congratulations on the features! Love all the details. You are a grand master that is clear at a glance. Well done. FAVORITE F/L

Thank you, Reynold. You are kind and generous.

Excellent job! We're proud to feature this one in our "Seagulls" group.

Thank you for visiting this site and featuring this painting. Kirkodd Photography.

Thank you very much, Belinda.

Thank you very much, Kellice. I appreciate your visit to the gallery.

Thank you very much, Arthur.

Thank you very much, Gert. I am delighted.

Fantastic painting! I love how the water flows! L/F

Thank you Alcy. I appreciate your visit and comment.

Congratulations AnnaJo, your outstanding artwork has been featured on the leading page of Impressionism group! Please take a moment to visit the group and view it there as it has been carefully arranged and displayed on our gallery wall with other fantastic artist’s works. Also, feel free to add it to the featured art archive in the group’s discussions as well. Excellent work! Lori

Thank you very much, Lori. I am honored to have this painting on your gallery wall.

Thank you very much, Sean.