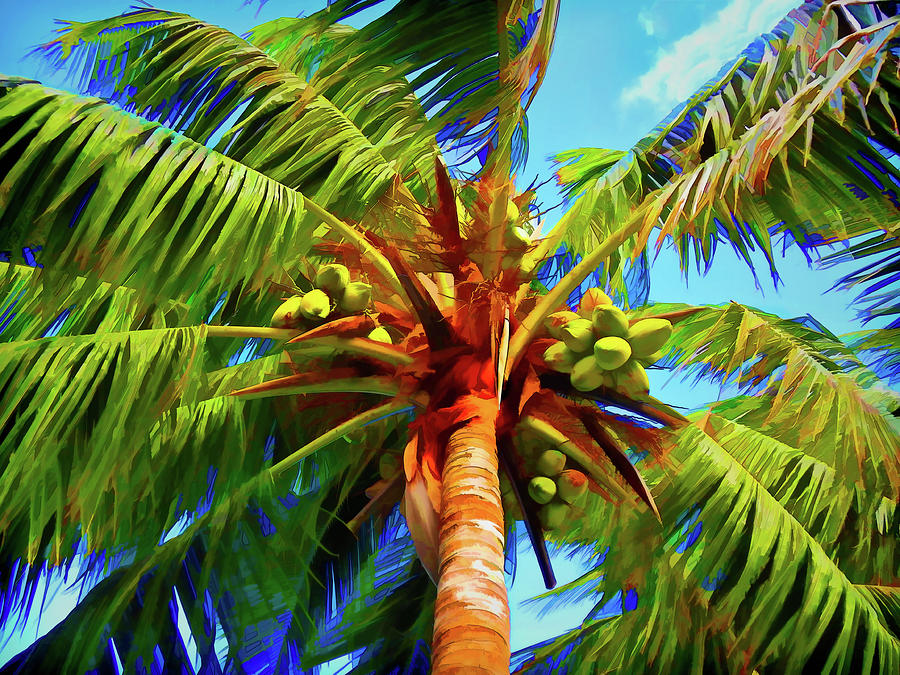 Coconut Palm in the Summertime is a photograph by Jennifer Stackpole which was uploaded on January 3rd, 2018.

Coconut Palm in the Summertime

The Coconut Palm tree is one of my favorites! This particular tree was photographed in the Florida Keys but can be found on tropical islands and... more

Coconut Palm in the Summertime

The Coconut Palm tree is one of my favorites! This particular tree was photographed in the Florida Keys but can be found on tropical islands and southern Florida. I digitally enhanced this piece to give it the golden, amber glow that I wanted to achieve. With all of my artwork I experiment with different effects and I use various methods and techniques to achieve desired results within my workshop and tools.

Did you know that the coconut tree (Cocos nucifera) is a member of the family Arecaceae (palm family) and the only species of the genus Cocos. The term coconut can refer to the whole coconut palm or the seed, or the fruit, which, botanically, is a drupe, not a nut. The spelling cocoanut is an archaic form of the word. The term is derived from the 16th-century Portuguese and Spanish word coco meaning "head" or "skull", from the three indentations on the coconut shell that resemble facial features.

Coconuts are known for their versatility ranging from food to cosmetics. They form a regular part of the diets of many people in the tropics and subtropics. Coconuts are distinct from other fruits for their large quantity of water (also called "juice"), and when immature, may be harvested for their potable coconut water. When mature, they can be used as seed nuts or processed for oil, charcoal from the hard shell, and coir from the fibrous husk. When dried, the coconut flesh is called copra. The oil and milk derived from it are commonly used in cooking and frying, as well as in soaps and cosmetics. The husks and leaves can be used as material to make a variety of products for furnishing and decorating. The coconut also has cultural and religious significance in certain societies, particularly in India, where it is used in Hindu rituals.

The origin of the plant is, after many decades, still the subject of debate. It has generally been accepted that the coconut originated in the India–Indonesia region and float-distributed itself around the world by riding ocean currents. The similarities of the local names in the Malaysia–Indonesia region is also cited as evidence that the plant originated in the region. For example, the Polynesian and Melanesian term niu and the Tagalog and Chamorro term niyog is said to be based on the Malay word nyiur or nyior.

O. F. Cook was one of the earliest modern researchers to draw conclusions about the location of origin of Cocos nucifera based on its current-day worldwide distribution. He hypothesized that the coconut originated in the Americas, based on his belief that American coconut populations predated European contact and because he considered pan-tropical distribution by ocean currents improbable.

Thank you very much Dawn Currie for the feature of this artwork in the Fine Art America group "Florida Images of the Sunshine State"!

Jennifer, Congratulations for your feature in our group, Florida-Images of the Sunshine State!

Thank you so much Tom Claud for making this artwork one of your favorites! I appreciate it!

Love the processing of this tropical palm. Congratulations Jennifer! Your outstanding photo is being featured on the home page of the Showcasing the South group. As a permanent record, you’re invited to post your image in the Featured Image Archive thread in the group discussions. L

Thank you Marianne Patterson for the visit and for making this piece one of your favorites! I appreciate it very much!

Thanks Carol! I appreciate the compliment.

This would look great on a large canvas!

This is gorgeous! Love it!! Great colors! l/f

Thank you Sharon and Marvin. I really appreciate it.

Jennifer this is such a beautiful image! LF