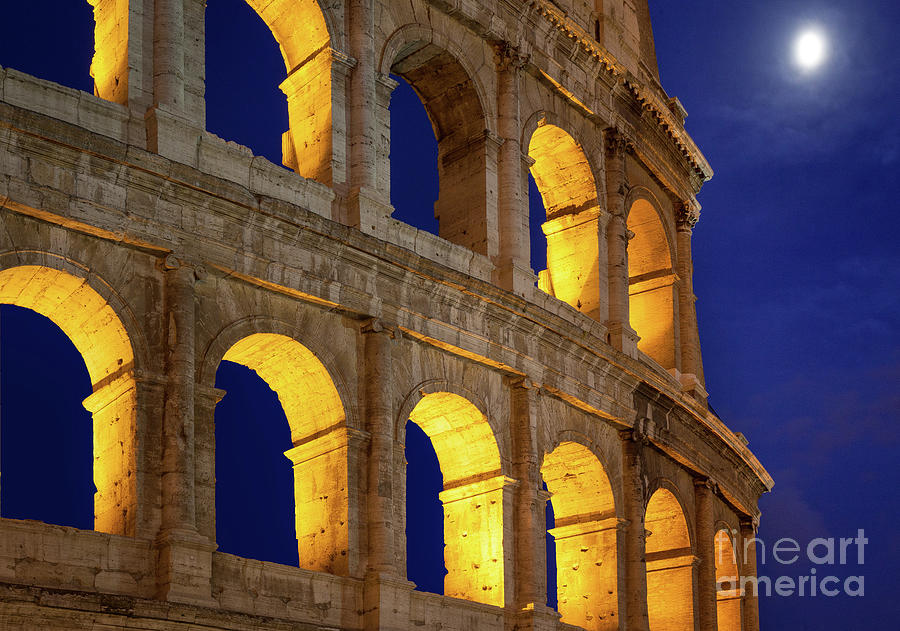 Colosseum and moon is a photograph by Inge Johnsson which was uploaded on November 27th, 2011.

The Colosseum, or the Coliseum, originally the Amphitheatrum Flavium (English: Flavian Amphitheatre, Italian: Anfiteatro Flavio or Colosseo), the... more

The Colosseum, or the Coliseum, originally the Amphitheatrum Flavium (English: Flavian Amphitheatre, Italian: Anfiteatro Flavio or Colosseo), the largest amphitheatre in the world, is an elliptical amphitheatre in the centre of the city of Rome, Italy, the largest ever built in the Roman Empire, built of concrete and stone. It is considered one of the greatest works of Roman architecture and Roman engineering.
Occupying a site just east of the Roman Forum, its construction started in 70 AD under the emperor Vespasian and was completed in 80 AD under Titus, with further modifications being made during Domitian's reign (81�96). The name "Amphitheatrum Flavium" derives from both Vespasian's and Titus's family name (Flavius, from the gens Flavia).
Capable of seating 50,000 spectators, the Colosseum was used for gladiatorial contests and public spectacles such as mock sea battles, animal hunts, executions, re-enactments of famous battles, and dramas based on Classical mythology. The building ceased to be used for entertainment in the early medieval era. It was later reused for such purposes as housing, workshops, quarters for a religious order, a fortress, a quarry, and a Christian shrine.
Although in the 21st century it stays partially ruined because of damage caused by devastating earthquakes and stone-robbers, the Colosseum is an iconic symbol of Imperial Rome. It is one of Rome's most popular tourist attractions and still has close connections with the Roman Catholic Church, as each Good Friday the Pope leads a torchlit "Way of the Cross" procession that starts in the area around the Colosseum.

Congrats for the sale! :)

Hi Inge...Congratulations on your image and your sale...Cheers Bob f/v

Congratulations on your sale Inge.

A splendid reminder of the Glory, the Might and the Terror that was Rome....

A really nice capture. Congratulations on your sale.

Congrats for being selected for this group and others! It sure is very well deserving!! v/f/t

Congratulations, on your Feature... Enjoyed seeing it in All Landscape & Scenery ... its one of our FAVORITES .... We do not always have the time to Comment, but just had to leave one on this beautiful piece of work.

Thank you very much, Patricia!

Awesome photo, Inge... You so beautifully captured the Colosseum by night! F&V

Thanks one more time, Mona. Tricky subject to do something new with. But so beautiful.

Beautiful imagery of this illustrious and historical wonder of the world! I believe that anyway! Totally awesome structure and you capture is divine, Inge! Thanks for sharing and you got my vote!

Thanks for the nice feedback, Randy; makes me happy :)

Congrats on getting 1st place in the contest! This is beautiful!

Inge, Congratulations on your 1st place win in the Arches in Architecture contest! You had our vote! Wonderful image! v/f/p