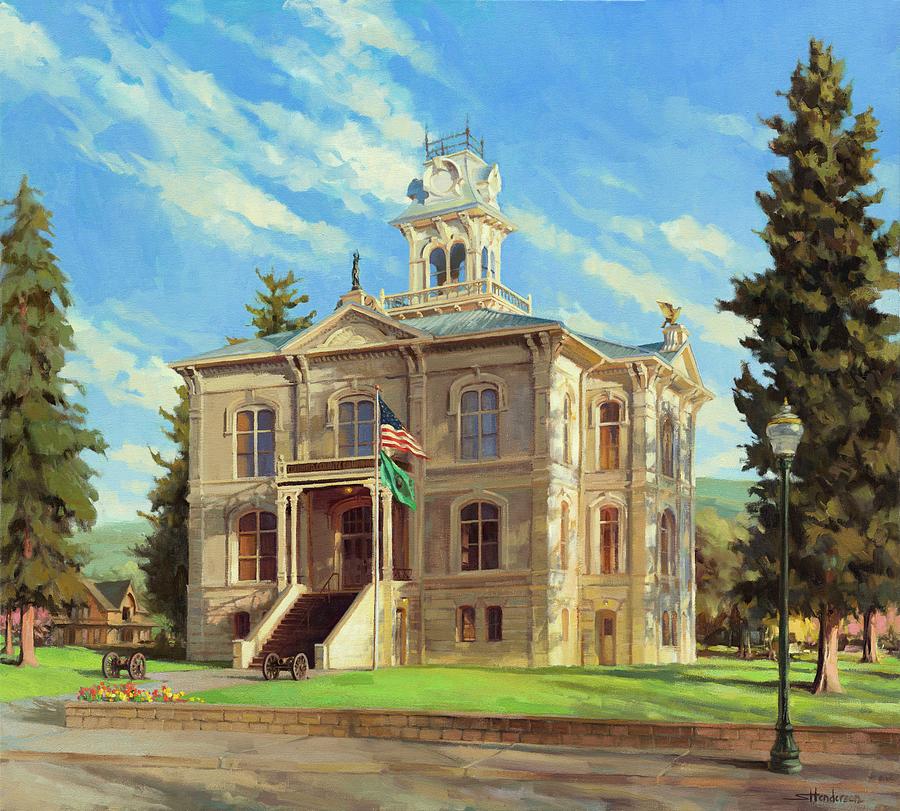 Columbia County Courthouse is a painting by Steve Henderson which was uploaded on November 2nd, 2017.

The Columbia County Courthouse in Dayton, WA, is an example of a community pulling together to preserve, protect, and renovate an historical... more

As the years went on, however, the courthouse began to fade in its glory, and assorted renovations and adjustments, including the removal of the blind justice statue and eagles – which were removed during World War II to be melted down for scrap metal – resulted in the courthouse looking old, sad, and a mere reflection of what it originally was.

In the 1970s, residents of Dayton turned their attention to recreating and renovating the historic nature of the town, including the county courthouse. Placed on the National Historic Register in 1975, the courthouse became the focus of an ambitious restoration program in 1984.

Looking to original photos of the courthouse for inspiration, concerned and committed citizens worked to bring the courthouse back to its former glory, and the final restoration – including a return of a replica of the scales of justice and the eagles – was completed in 1993.

The Columbia County Courthouse is the oldest working courthouse in Washington State’s 39 counties, and is a central focus of the town. Visitors and tourists stand before its steps and grounds to take pictures, and the grounds are a favorite spot for festival tents during the town’s many celebrations and activities. Inside, in addition to regional and superior court offices, are the auditor's office, and the assessor. In the basement are the sheriff's department, 911 dispatch, and the county jail.

The original oil painting of the Columbia County Courthouse was commissioned for a federal judge’s quarters – as a child, the judge and family, who frequently passed through Dayton on family trips throughout the state – made a special tradition of stopping at the courthouse grounds and enjoying a picnic.

Congratulations on your feature in the No Place Like Home group!

Congratulations Steve, your outstanding artwork has been featured on the leading page of Impressionism group! Please take a moment to visit the group and view it there as it has been carefully arranged and displayed on our gallery wall. Also, feel free to add it to the featured art archive in the group’s discussions as well. Excellent work! Lori

BRAVO! Your stunning artwork has earned a FEATURE on the homepage of the FAA Artist Group No Place Like Home,7/27/2019! You may also post it in the Group's Features discussion thread and any other thread that fits!

Thank you for those kind words, Leanne. This was a challenging, fun commission.

What a grand old building! l/f/p