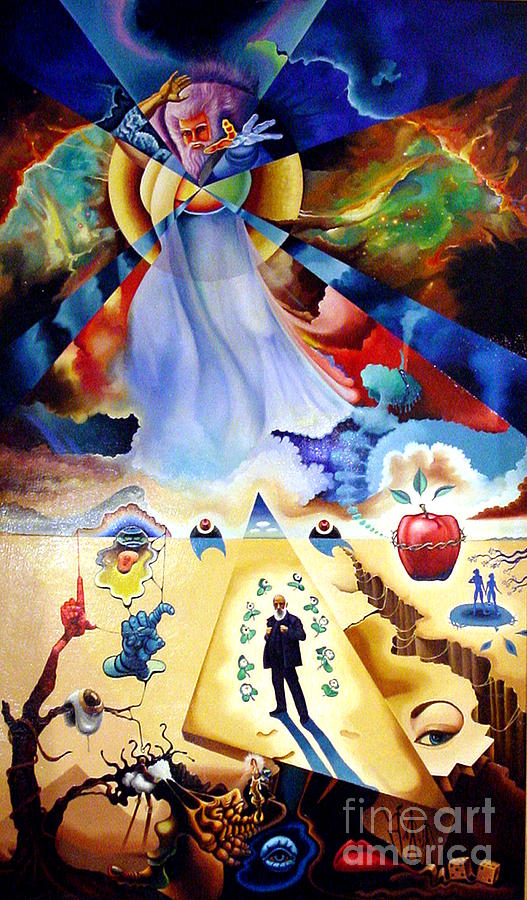 Coming In The Clouds is a painting by Peter Olsen which was uploaded on April 18th, 2012.

Coming In The Clouds

This is a large painting and is based on the text from Chapter 1, verse 7 of Revelation “Behold he cometh with clouds; and every eye shall see him”,... more

Coming In The Clouds

This is a large painting and is based on the text from Chapter 1, verse 7 of Revelation “Behold he cometh with clouds; and every eye shall see him”, the central figure bursts forth from the nebulae in a cloud-like appearance, projecting the image of power, strength, wisdom, and justice.

The lower portion depicts a barren earth...a red apple symbolizing original sin...thorns encircling the apple are those of the crucifixion...in its shadow are Adam and Eve and above them the tree of knowledge...the crevice is the split from paradise on earth...the strings connect all of life...a woman’s eye and lips are the face of seduction...dice symbolize mankind’s gamble with life and eternity...three figures are observers, seemingly lost.

In the middle is a triangle shape...at its bottom is the image of a man and flowers around him, representing man’s own philosophies and the seeds sown by them...footprints are leading nowhere...at the top are three clouds of Consistency, Credibility, and Concentration — attributes mankind believes necessary for success.

At the bottom left is a tree, barren and dying with a snake of deception wrapped around it. A man below the tree branch carries two clouds in his arms, trying to emulate the outward attributes of the figure he sees coming forth in the clouds; but his feet are sinking in the sand and above him is a hangman’s noose...nearby is an emaciated hand pointing to abyss. The eyes placed throughout are knowledge, perception, enlightenment. Continuing upward on the left are two hands — a red hand pointing to the main figure and a blue hand pointing towards man. Above it is an egg, representing rebirth.