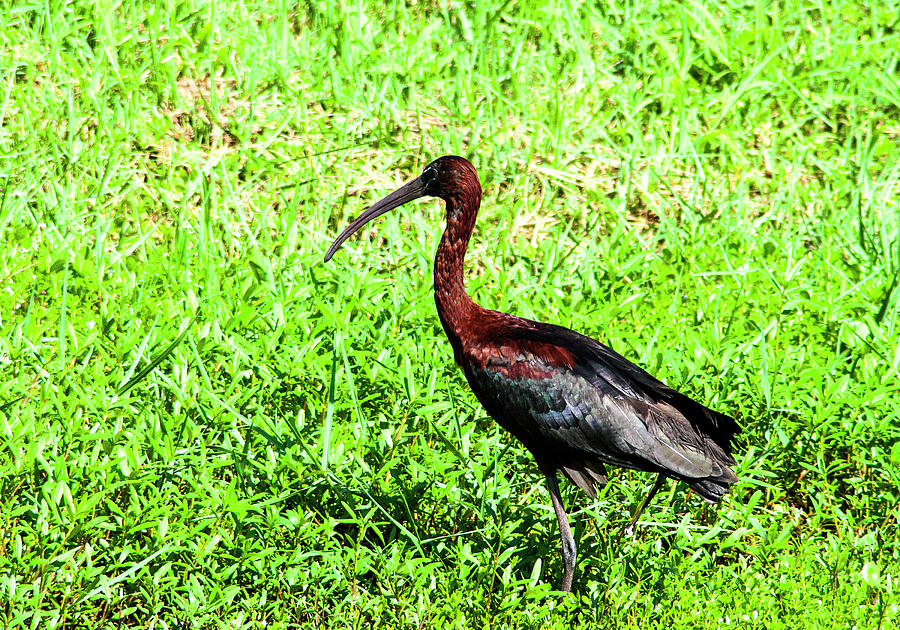 Coppery Ibis is a photograph by Norman Johnson which was uploaded on January 16th, 2017.

A glossy ibis walks along looking for a snack on a hot summers day in August of 2016 in Ruskin, Florida on the south end of Hillsborough County. The... more

A glossy ibis walks along looking for a snack on a hot summers day in August of 2016 in Ruskin, Florida on the south end of Hillsborough County. The glossy ibis (plegadis falcinellus) is the most widespread Ibis species in the world inhabiting the warm regions of Europe, Asia, Africa, Australia, North America, Central America, South America, and the Caribbean. I likes wetlands, swamps, bottomlands, mangroves, flooded plains and fields, as well as freshwater and saltwater marshes.

It is a medium sized wading bird measuring from 18.9" to 26" in length with a wingspan between 31" and 41." It has a long down-curved brownish bill, long legs and a dark body. Breeding adults have a dark metallic reddish-brown body and dark almost black wings that shine with a bronze metallic green tint in the right light. Their facial skin is dark bordered above and below the eyes in cobalt blue. In non-breeding adults, the border around the eyes is a light blue-grey and their overall coloring is a darker duller brown with white streaks on the head and neck. The immature glossy ibis is similar to the non-breeding adult but with variable flecks of white that may show up on the forehead, neck or throat.

I'm glad you like it Doug. Thank you very much for the feature in the group "Animal Photographs."

Nice profile and it is so colorful!! v/f

Thank you very much Robert.