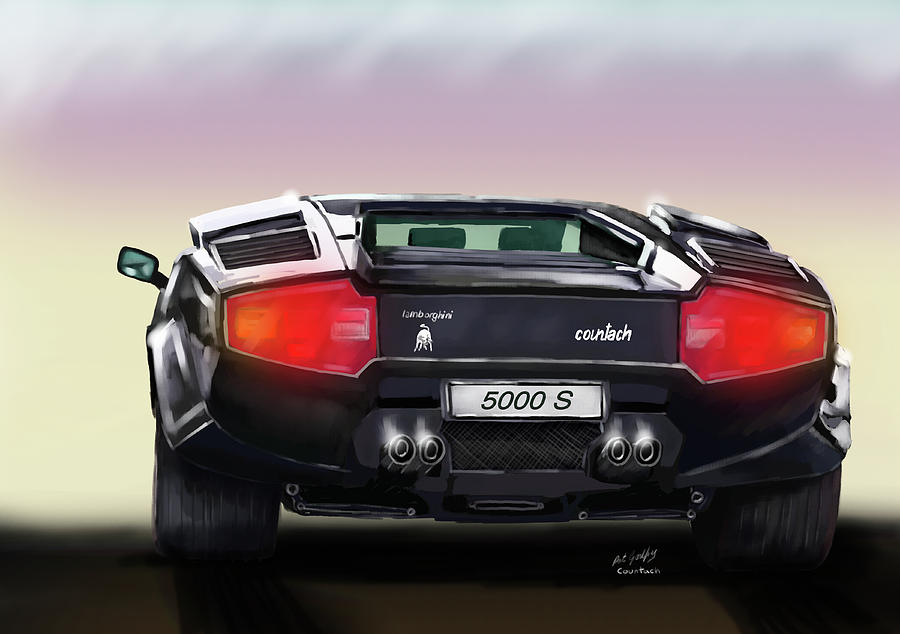 Countach is a painting by Pat Godfrey which was uploaded on September 24th, 2016.

C'mon boys, who of a certain age didn't have a center fold or poster of the magical Lamborghini Countach on their bedroom wall when they were younger... more

C'mon boys, who of a certain age didn't have a center fold or poster of the magical Lamborghini Countach on their bedroom wall when they were younger - even though it seemed to be owned then mainly by girls?

It was the defacto super car in days gone by. In truth, as advanced in style as it appeared to be at the time, rather like the legendary moments warned against by lore, such as meeting your hero, in the flesh there were several design flaws that needed taking care of. For me, it was that rear light cluster of after-market lenses hastily screwed onto a piece of marine board, or equally cheap looking garb. So, while painting this hero of my early automotive wet-dreams, I addressed the issue and painted in the translucent acrylic light cover the car had always needed since Marcello Gandini of the Bertone design studio had had his "Heavens!" vision diluted by Italian thrift.

The beast is huge on screen, but in reality it hunkered low. Those "Space 1999"-style over wings menaced drivers from the rear as much as it did from its razor-sharp front edges. It loomed, snarled (V12!), and leered its way along the road in my own dreams where city slickers dove for the drains and sidewalk in reverence to our throbbing approach...

Too much? Heck, I was just a kid! Anyway, red was the fastest colour, but black was the coolest. This is the coolest!

Love the Lamborghini. Definitely on the MUST GET list