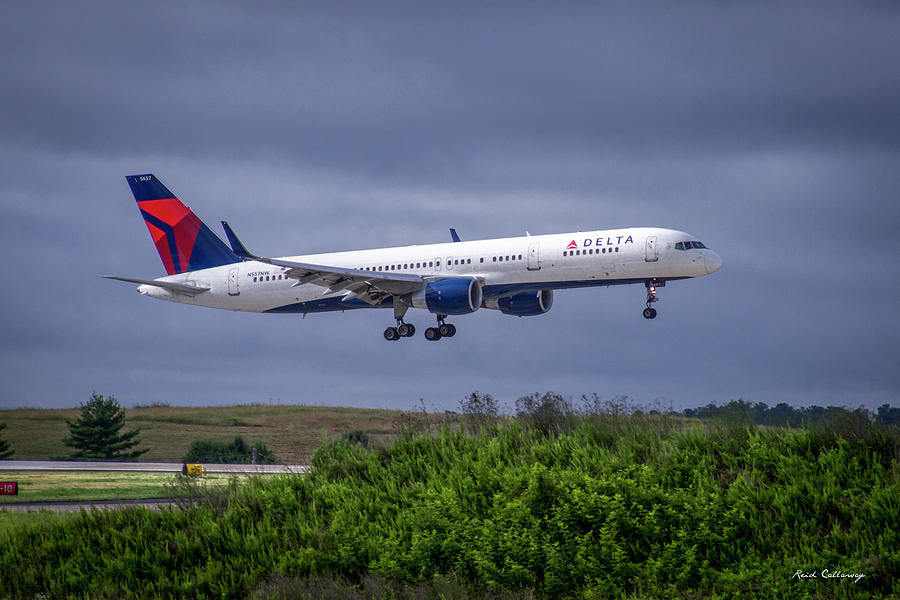 Delta Air Lines 757 Airplane N557nw Art is a photograph by Reid Callaway which was uploaded on August 23rd, 2015.

This beautiful Delta Air Lines 757 is landing early in the morning at Atlanta's Hartsfield-Jackson Atlanta International Airport on runway 5, the only civil airport in the nation to have a runway above an interstate.

Delta Air Lines, Inc. ("Delta"; NYSE: DAL) is a major American airline, with its headquarters and largest hub at Hartsfield-Jackson Atlanta International Airport in Atlanta, Georgia. The airline along with its subsidiaries operate over 5,400 flights daily and serve an extensive domestic and international network that includes 334 destinations in 64 countries on six continents, as of June 2015. Delta is one of the four founding members of the SkyTeam airline alliance, and operates joint ventures with: Air France-KLM and Alitalia; Virgin Atlantic; and Virgin Australia. Regional service is operated under the brand name Delta Connection.

Delta is the sixth-oldest operating airline by foundation date, and the oldest airline still operating in the United States. The company's history can be traced back to Huff Daland Dusters, founded in 1924 in Macon, Georgia as a crop dusting operation. The company moved to Monroe, Louisiana and was later renamed Delta Air Services, in reference to the nearby Mississippi Delta region, and commenced passenger services on June 17, 1929. Among predecessors of today's Delta Air Lines, Western Airlines and Northwest Airlines began flying passengers in 1926 and 1927, respectively.

In 2013, Delta Air Lines was the world's largest airline in terms of scheduled passengers carried (120.6 million), and the second largest in terms of both revenue passenger-kilometers flown (277.6 billion)[17] and capacity (4.4 billion ASM/week; March 2013).

Hartsfield-Jackson Atlanta International Airport known locally as Atlanta Airport, Hartsfield, or Hartsfield-Jackson, is located seven miles (11 km) south of the central business district of Atlanta, Georgia, United States. It has been the world's busiest airport by passenger traffic since 1998, and by number of landings and takeoffs from 2005 until 2013. Hartsfield-Jackson held it's ranking as the world's busiest airport in 2012, both in passengers and number of flights, by accommodating 95 million passengers (more than 260,000 passengers daily) and 950,119 flights. Many of the nearly one million flights are domestic flights from within the United States, where Atlanta serves as a major hub for travel throughout the Southeastern United States. The airport has 207 domestic and international gates.
Hartsfield-Jackson is a focus city for low-cost carriers Southwest Airlines and Frontier Airlines, and is the primary hub of Delta Air Lines and Delta Connection partner ExpressJet; at nearly 1,000 flights a day, the Delta hub is the world's largest airline hub. Delta Air Lines flew 59.01% of passengers from the airport in February 2011, AirTran flew 17.76%, and ExpressJet flew 13.86%. In addition to hosting Delta's corporate headquarters, Hartsfield-Jackson is also the home of Delta's Technical Operations Center, which is the airline's primary maintenance, repair and overhaul arm. The airport has international service to North America, South America, Central America, Europe, Asia and Africa. As an international gateway to the United States, Hartsfield-Jackson ranks sixth.

In May 2001 construction of a 9,000-foot (2,700 m) fifth runway began. It was completed at a cost of $1.28 billion and opened on May 27, 2006. It bridges Interstate 285 (the Perimeter) on the south side of the airport, making Hartsfield-Jackson the only civil airport in the nation to have a runway above an interstate. Along with the construction of the fifth runway, a new control tower was built to see the entire length of the runway. The new control tower is the tallest in the United States, with a height of over 398 feet (121 m).

Comments, Likes and Favorites are appreciated... :-)

Thank you to my buyer from West Monroe, NY for the purchase of my image, "Delta Air Lines 757" printed on a IPhone 6 Case! May this image be a Blessing and bring back wonderful memory for years to come! 12/8/2019

Thank you to my buyer from Rindge, NH for the purchase of my image"Delta Air Lines 757" printed on a Beach Sheet! May this image be a delight and wonderful memory for years to come! 12/9/2018

Thank you to my buyer from Lumberton, NJ for the purchase of my image printed on a Spiral Notebook! May my artwork be a delight! 12/9/2018

Thank you Romuald Henry Wasielewski for featuring my artwork in our group... Arts Fantastic World! 12/3/2017

Thank you John M Bailey for featuring my artwork in our group...Images That Excite You! 11/28/2016

Thank you Frozen in Time Fine Art Photography for featuring my artwork in our group.... The Niche! 6/6/2016

Thank you to the buyer from Edina MN who purchased this image for their iPhone 4/4s. May it be a point of conversation and joy!

Thank you to my buyer from Eagle, MI who purchased my image. May this image be a point of conversation and joy to the owner.

Thank you Joetta Beauford for featuring my artwork in our group... Rock The Sales!

Thanks so much Lyric Lucas for featuring my artwork in our group... Industrial Art!

Congratulations your creative art is featured in the "INDUSTRIAL ART" group!