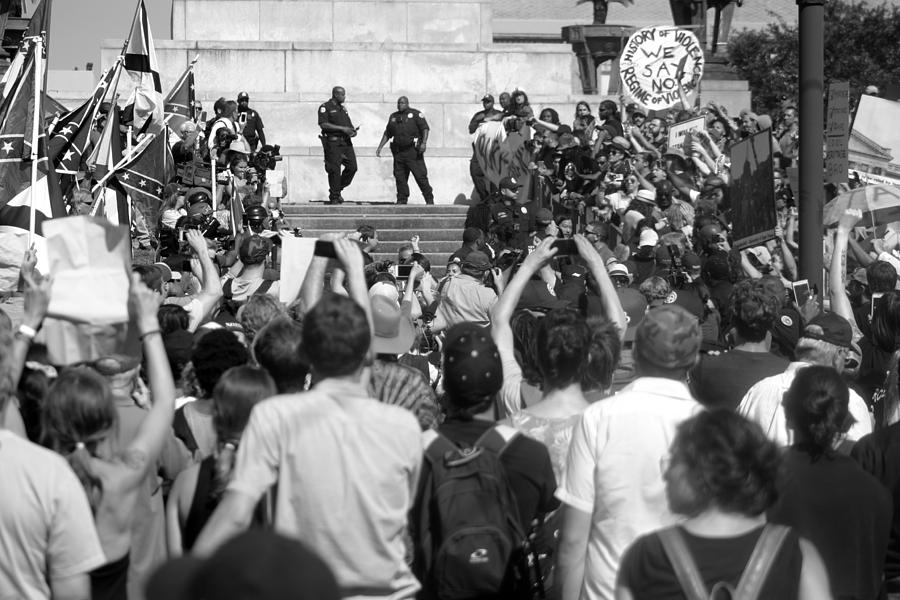 Demonstrators Clash At The General Robert E. Lee Confederate Mounment In New Orleans is a photograph by Michael Hoard which was uploaded on May 15th, 2017.

One of a new series included in a future book release The Rise And Fall Of Confederate Statues In New Orleans, Louisiana. In this photo a neutral... more

One of a new series included in a future book release "The Rise And Fall Of Confederate Statues In New Orleans, Louisiana. In this photo a neutral zone was created to prevent any hostile clashes among both sides of the dispute. On the right are the citizens in protest of the monument standing and on the left or protestors against the removal of the monument.

The entire area was blocked two blocks in all directors for safety concerns. The world famous St. Charles Avenue St. Car was stopped blocks away and riders bused to down town Canal Street.

One of a new series this a black and white along with color photographs. "The Fall and Rise Of Confederate Statues In New Orleans" a future book release all rights reserved photographs and title Copyright by Michael Hoard These magnificent pieces of art, sculptures are being removed from public viewing on city property because as the Mayor of the city commented upon it does not reflect who we truly are as citizens or what New Orleans represents. It has been an ongoing heated dialog locally, national and international level around the world.

New Orleans is like no other place around the world, its food, architecture, deep rooted traditions, cultures, heritages, music but most importantly its citizens the heritages of all its citizens.

This iconic statue does not seem to cause conflict of interest or stir protest standing in place yet side by side all people from all walks of life, locals, tourist, all different heritages, races during the traditional Mardi Gras traditions, the statue was least concerning but catching that prized Mardi Gras throw was a more important issue at hand.

In short, it was the mayors imitative and city council to have them removed some believing it was for personal gain. Since the statues are on city property no vote was mandatory for the removal of the statues in question. Both sides of dialog was listened, including all levels of courts and as now seen on national news it has placed the mayor in the limelight of attention and a nation wide boycott on social media.

I personally made public years ago locally commented of a new current day civil war, a moment across the country and though we are all free America we do have limitations. I made public as the movement of a new type of civil unrest and moment pertaining to sculptures of art and I vision the statue of liberty facing east, turning her head north, west and looking south and saying thinking would she have anything to worry about? Will she be subject of being destroyed by a terrorist act or another country because of what she symbolizes and represents freedom for all Americans and peoples around the world.

Living just a few short blocks away which I have photographed throughout the years from a photographers perspective. I took over 37 years ago the only known photo of its kind. I was one of the first individuals on scene Sunday May 7th, 2017 The statue is scheduled to be removed but still remains. This photo reveals just a few of the many local police, state police and homeland security who took their place surrounding the entire parameter of the Robert E. Lee circle anticipating the huge crowd of protest assembling at the site which the famous St. Charles encircles heading downtown and back uptown. A estimated of over 700 demonstrators marched from another location, while others awaited their arrival.

The mayor, police chief made it perfectly clear all acts of violence would not be tolerated and they were prepared for the worse scenario. No one knew exactly what would take place once the two opposing sides met face to face. Here in the city the grassing area between the lanes of traffic is called a neutral ground. What the police did was set barricades on the monument site allowed the demonstrators for the statues to remain and the opinionates of the removal and create a dividing zone. Protestors shouted from each side of the neutral ground or barrier to separate themselves. I only witnessed one arrest prior to the demonstration and saw a few heated pushing matches scuffles without any arrest made. What I thought was interesting a very large headed shoving match the police took the individuals and pushed them both to the ground and proclaimed keep it peaceful, which they did without arrest. It was highly organized demonstration, the freedom to voice and demonstrate included locals and individual outside New Orleans..

I have been attending all the demonstrations and from a photographers perspective placing myself in what could become a volatile situation at any given moment. My photographs reflect both sides of the demonstration. I had always considered the monument as sculptures of art and aware of the history. We are all have our own individual beliefs and ideals along with family heritages.

Throughout my gallery you can find many one of a kind iconic photos of General Robert E. Lee for your purchases. No copying or reproduction is strictly prohibited without permission from the photographer all images Copyright by Michael Hoard

A personal narrative by the photographer, the removal of any statue of conflict will not change the social tensions among all from a local, national and international level. There w will exist various points of view injustices and indifferences which us all in one way or another it is a part of all our heritages. It is not just the representation of an artist immortalizing someone but the acts of the individual which instilled the deep rooted memory in our individual minds.

Throughout all times of American trials and tribulations, social violence, injustices, conflicts of war there will always exist a personal conflict of interest lurking about to become global attention. Man has attempted throughout time to change the past and yet to learn from the mistakes of the past for a peaceful future. All acts of the past become part of history and yet the present day changes too become the history and future of tomorrow, tomorrow is the here and now for all to come together as a peaceful nation.

As in the past as now the future, somewhere, someplace, someone around the world will evoke havoc which will involve all of humanity to disrupt peace and harmony.

Greetings Frozen, thank you so much for the recent feature of Demonstrators Clash At The General Robert E. Lee Confederate Monument, in the group Your Very Best Photograph, I sure appreciate this, Cheers, Michael Hoard eyeseeColors

Greetings Kathleen, thank you so much for viewing Demonstrators At The General Robert E. Lee Confederate Monument, it pleases me this photo appeals to you and I appreciate the generous comment, I have only reviewed the tip of the ice burg of thousands of images to review, as a 57 year old photographer this historic event in New Orleans I would not have missed out of participating from a artist/photographer perspective., Cheers, Michael Hoard