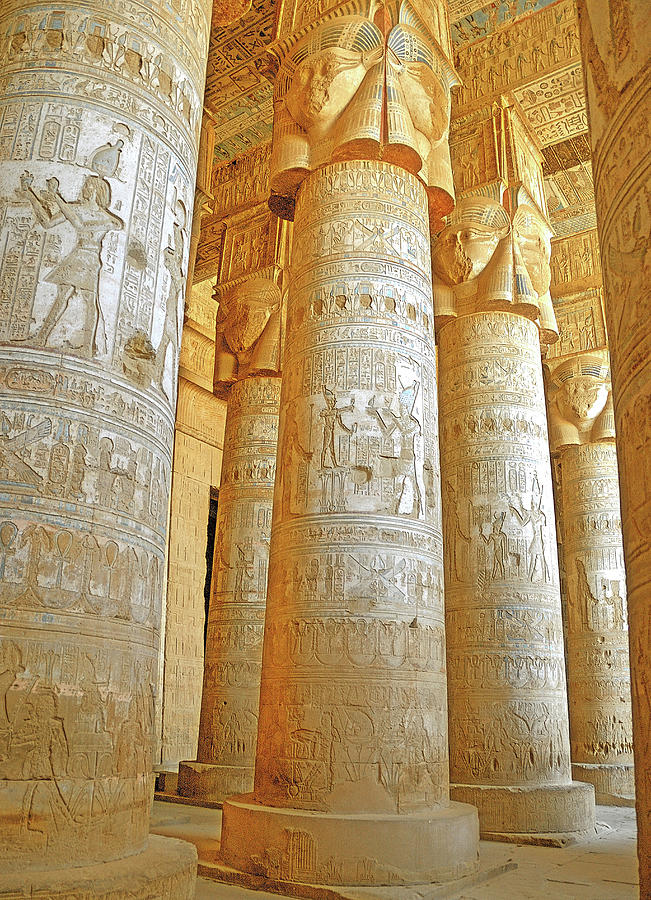 Dendera Temple is a photograph by Nigel Fletcher-Jones which was uploaded on May 1st, 2017.

The complex of temples at Dendera (ancient ‘Iunet’ or ’Tantere’) lie close to the Nile about five kilometers south of Qena, and on the... more

The complex of temples at Dendera (ancient ‘Iunet’ or ’Tantere’) lie close to the Nile about five kilometers south of Qena, and on the opposite (or west) bank, though because of the bend in the river the main temple, unusually, faces north.
The site is enclosed by a mud brick wall and covers around 40,000 square meters, and is dominated by the magnificent Greco-Roman Temple of Hathor shown here—the best preserved example of a temple from the era.
However, as a religious site, Dendera stretches back much further in ancient Egyptian history. A prolific builder of the sixth dynasty, the pharaoh Pepi I Meryre (reigned 2332 – 2287 B.C.), built here, and there is evidence also of an eighteenth dynasty (circa 1500 B.C.) temple. The earliest building to have survived is the Mammisi (a small chapel close to a larger temple and associated with the birth of a god) built by the last of the native Egyptian pharaohs, Nectanebo II of the thirtieth dynasty (reigned 360-343 B.C.).
The Temple of Hathor was established in the Middle Kingdom and was modified up to and including the reign of the Emperor Trajan. The extant building dates to the Ptolemaic period with later Roman additions. At the rear of the temple there are fine carvings of Cleopatra VII Philopator (popularly ’Cleopatra’) and her equally ill-fated son by Julius Caesar, Ptolemy XV Philopator Philometor Caesar (‘Caesarion’).
On the roof of the temple is a small chapel dedicated to Osiris from which the famed circular Greco-Roman zodiac—now in the Louvre—was removed using saws, jacks, scissors and gunpowder and sent, in 1822, to Paris where it was originally installed in the royal library of Louis XVIII.
The great hypostyle hall at the front of the temple is dominated by twenty-four columns each with a four-sided sistrum capital featuring the face of the goddess Hathor. All of the capitals were defaced by early Christians who chipped away most of the facial features.
Nonetheless, much of the original color scheme survives in the temple, making it one of the most atmospheric ancient Egyptian building to have survived.