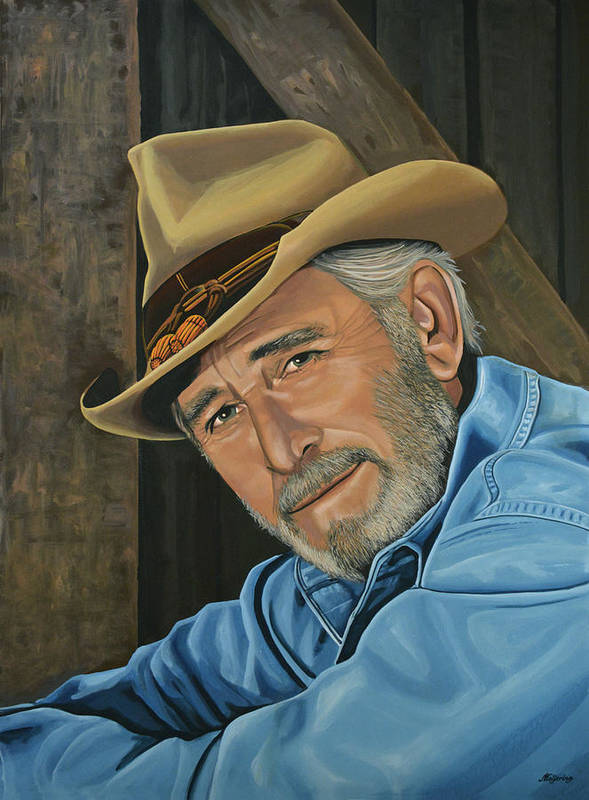 Don Williams Painting poster by Paul Meijering.   Our posters are produced on acid-free papers using archival inks to guarantee that they last a lifetime without fading or loss of color. All posters include a 1" white border around the image to allow for future framing and matting, if desired.

Great artwork and congrats on the sale of this one Paul

Congratulations on successful sale of your art piece! Well done!

Thank you so very much, Ronel, for your compliments, support and the feature in your best group!!;-))

Hope this is not the only place you show your art. It should be in a gallery somewhere, or everywhere. awesome work

Wow.., thank you so much, Valenteana, for your compliments and so very kind words!!;-)

Thank you so much, Nicola, for the Feature in your wonderful Group!;-) I'm honoured!;-)

You are so talented, Paul! Really excellent work!

I love Don Williams this is a superb portrait of him, I have 2 I've done of him, their not on here yet, it's a skill I love and it's all about getting inside the head of the star to reflect the person in their likeness I've fav this one

Thank you so much, Joan-Violet, for your compliment and the fav!!;-)

Thank you so much, Tyler! This compliment means a lot coming from you; I am honoured!...

Paul, Congrats on Your Home Page Feature in Weekly Fun!!!...Bravo on Your Excellent work and Feature!!!

Thanks so much, for the feature in your wonderful group!!...;-)

It being my first time ordering from Pixels, I did not know what to expect. The order was delivered promptly and the packaging was superb, so no creases in the photo. Very happy with the whole process and only can recommend the sales channel.

Just what I wanted, a very imaginative take on Area 51. I have stored it carefully prior to framing once I get to my summer vacation in New Zealand. I am a High School Social Studies teacher here and I can show my students how you can be very imaginative about Area 51. We are studying Nellis AFB at the moment.They are Grade 9 equivalent to the USA.

Beautiful artwork! Ordered in 11x14 size and resolution was not that sharp... a little more pixelated that what was expected.

Beautiful artwork! Ordered in 11x14 size and resolution was not that sharp... a little more pixelated that what was expected.

SO happy with this picture. I have been trying to take a nice photo of the Sutliff Bridge for weeks and this far exceeded anything I could capture!

Love this picture. The quality of the work is beautiful.

Realistic acrylic painting of the American country singer Don Williams, painted by the Dutch fine artist Paul Meijering - the Original painting is 120 x 90 cm and SOLD Don Williams (born May 27, 1939, Floydada, Texas, United States) is an American country singer, songwriter and a 2010 inductee to the Country Music Hall of Fame. He grew up in Portland, Texas, and graduated in 1958 from Gregory-Portland High School. After seven years with the folk-pop group Pozo-Seco Singers, he began his solo career in 1971, singing popular ballads and amassing 17 number one country & western hits. His straightforward yet smooth bass-baritone voice, soft tones, and imposing build earned him the nickname: "Gentle Giant" of country music.