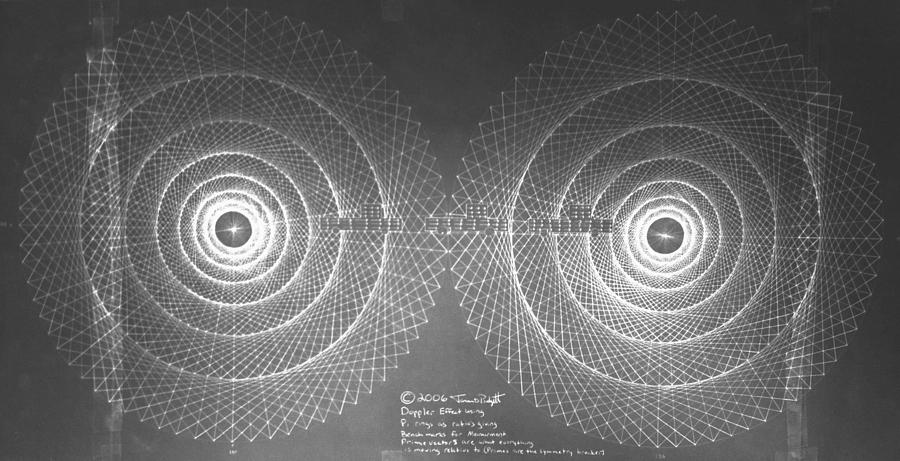 Doppler Effect Parallel Universes is a drawing by Jason Padgett which was uploaded on March 31st, 2011.

This is relativity explained in away that is easy to see and understand. I love this!... more

Drawing - Pencil On Paper With Color Added By Computer

This is relativity explained in away that is easy to see and understand. I love this!

There is something called the Doppler effect. It is how waves are interpreted by the observer (the person looking at whatever they are observing).

Now, imagine a car, like the one in the drawing, driving past you at a high rate of speed from the left to the right. It makes a sound, vvvvvrrrrrrrooooommmmmm, as it goes by you. (very scientific word vroom :) Notice that the pitch changes as it goes by you. As the car is approaching you the sound waves are being compressed together because it is approaching you so you here the pitch getting higher (shorter wavelengths make a higher pitch), then as it passes you the pitch gets lower. It get lower because the wave is stretching out as it moves away from you (longer wavelengths make a lower pitch). This is how the doppler effect works. What is so amazing about it is when you add it relativity...or (multiple observers in different positions observing the same object).

Now imagine you are in the center of the left circle/wave and I am in the car going from left to right and your friend is at the center of the circle/wave on the right. Since I'm moving away from you, you hear the pitch to the car getting lower and lower (as the wavelengths stretch out and get longer relative to you), but your friend is in a different position in spacetime relative to me, so I am approaching them. This means they hear the pitch getting higher and higher(because the wavelengths compress and get shorter and shorter wavelengths are a higher pitch). I on the other hand, am traveling with the wave so I hear a medium pitch and no sound change.

It is actually making all three different sounds, relative to the position and velocity of the observer (the people) and the observed (the car).

Then we ask, "Which reality is the real one?" The answer is that they all are real, just relative to the position, velocity and acceleration of the observer and the observed.

When scientists talk about relativity or sometimes 'Parallel Universes", this is what they are talking about. If you have an infinite number of people all observing the same car and they are all moving at different velocities and/or accelerating at different rates then the car can be made to sound like anything. It is relative.

To make it even more amazing we recall that everything that exists are waves and are subject to the doppler effect. So all senses and observations ie, color, sound, time rate, taste, touch, sense of magnatism etc. is relative to the velocity and acceleration of the observer and the observed.

The quirky, beautiful, elegant, empowering, humbling infinite states of the universe. How can we not be in awe every moment when we remember this? :)

Congratulations on your sale :)

Lovely artwork! Congratulations on your sale!

Congratulations on your sale, Jason!! Very interesting shot, I like it:-)!

Amazing. No words for it. Just amazing!

Congratulations for your sale Jason!!

Hey Jason, I didn't know you belonged to FAA!!! Good for you!