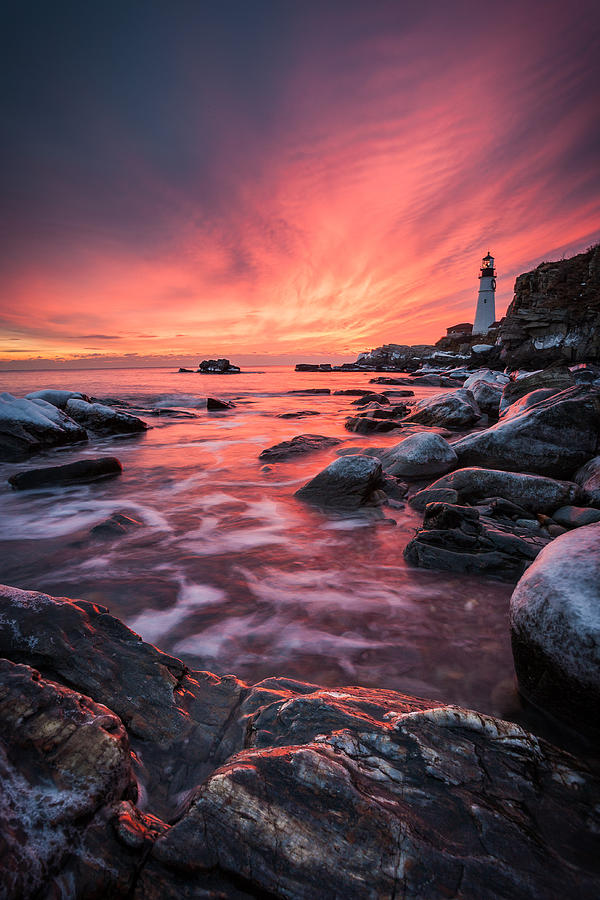 Dramatic Sunrise on the Coast of Maine is a photograph by Benjamin Williamson which was uploaded on January 11th, 2014.

Dramatic Sunrise on the Coast of Maine

I kinda almost didn't make it out this morning. Well, I say kinda, but there was no way I wasn't getting up for this sunrise. Super tired from... more

Dramatic Sunrise on the Coast of Maine

I kinda almost didn't make it out this morning. Well, I say kinda, but there was no way I wasn't getting up for this sunrise. Super tired from staying up looking for northern lights two nights ago, and not really focused on any new goals at the moment, it was hard to push myself out of bed . But... as I posted last night, I knew there was going to be a good sunrise. Like, 80% sure.

I considered my options, and knew that I wanted to capture a seascape or frozen bay somewhere. I made my way down to Falmouth to shoot the town landing, and it was a total ghost town. As happens from time to time, I found myself driving to Portland Head Light, where I knew the rocks and tides would make for some really nice compositions.

I was clambering down across the ice-covered, slick as hell rocks when I saw another figure shooting where I was hoping to get my shot from. I stayed back for a moment and tried some other comps, but I wanted to be where this guy was. I started walking over, and said, 'How's it going', when around turns Yegor Malinovskii. You probably don't know Yegor unless you are highly tuned into the Maine photography scene. This guy flies under the radar, but makes some of the most stunning landscapes I've seen. He's a busy man, but he has that nasty habit of being a real perfectionist and only posting his best images, which blow most of us right out of the water! Check him out at 500px.com/YegorMalinovskii

We were chatting as the sky exploded in front of us, and I almost missed my shot. I was happy to see Yegor and really glad just to be there, as always, witnessing such wonderful spectacles of nature. I casually fired off a few frames and watched the sky roar red and then slowly fade to blue. On this morning the sun never showed itself, choosing to hide behind incoming snow clouds.

Yegor mentioned that he'll be going on a photo workshop with Marc Adamus in March, which makes me very excited to see what he brings back. It's likely all in my head, b

This is stunning! Congratulations on your sale!

Just wow. Excellent shot! Sure glad you got up that morning. V/F