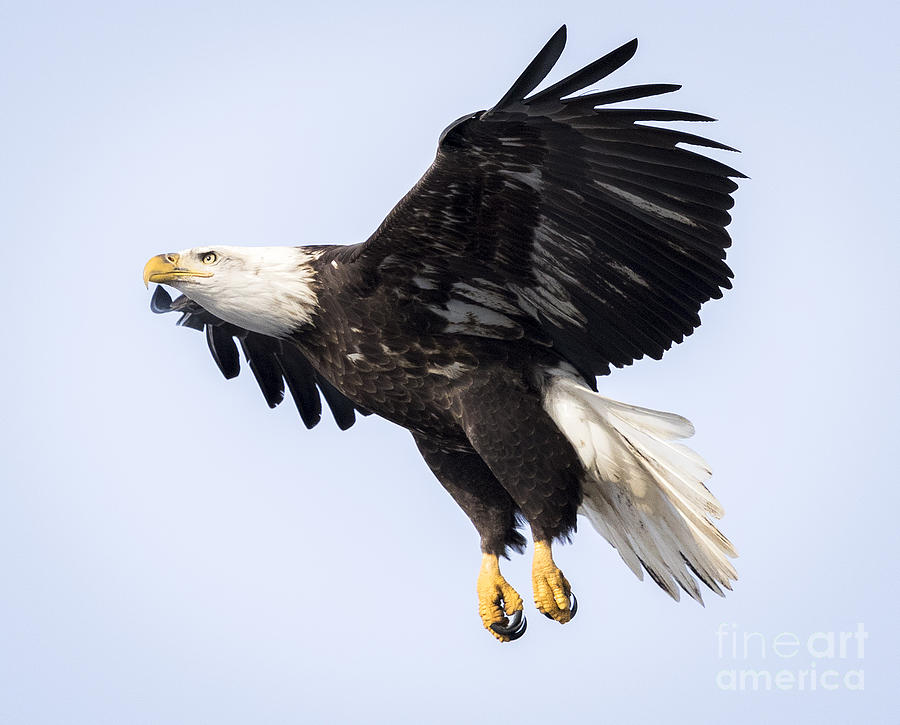 Eagle Coming in For a Landing is a photograph by Ricky L Jones which was uploaded on February 8th, 2016.

Eagle Coming in For a Landing

Eagle Coming in For a Landing... more

Eagle Coming in For a Landing

Eagle Coming in For a Landing
Wisconsin River, Wisconsin

The bald eagle (Haliaeetus leucocephalus, from Greek hali "sea", aiētos "eagle", leuco "white", cephalos "head") is a bird of prey found in North America. A sea eagle, it has two known subspecies and forms a species pair with the white-tailed eagle (Haliaeetus albicilla). Its range includes most of Canada and Alaska, all of the contiguous United States, and northern Mexico. It is found near large bodies of open water with an abundant food supply and old-growth trees for nesting.

The bald eagle is an opportunistic feeder which subsists mainly on fish, which it swoops down and snatches from the water with its talons. It builds the largest nest of any North American bird and the largest tree nests ever recorded for any animal species, up to 4 m (13 ft) deep, 2.5 m (8.2 ft) wide, and 1 metric ton (1.1 short tons) in weight. Sexual maturity is attained at the age of four to five years.

Bald eagles are not actually bald; the name derives from an older meaning of "white headed". The adult is mainly brown with a white head and tail. The sexes are identical in plumage, but females are about 25 percent larger than males. The beak is large and hooked. The plumage of the immature is brown.
-Wiki

Thank you very much Dale!

Thank you Asbed, it flew right by me! :)

Awesome, such majestic birds and this is a wonderful image! L

Thank you very much Rosanne!

Thank you very much John!!

Ricky, Congratulations on your feature in our group, I Love Nature Photography - celebrating the best of our natural world!

Thank you very much Dawn!!

What a fine piece of artwork for me to proudly display on our Featured Artwork section of our Homepage of our Wisconsin Flowers and Scenery group! Thanks for sharing! LIKED & FAVED Randy B. Rosenberger (WFS group administrator)