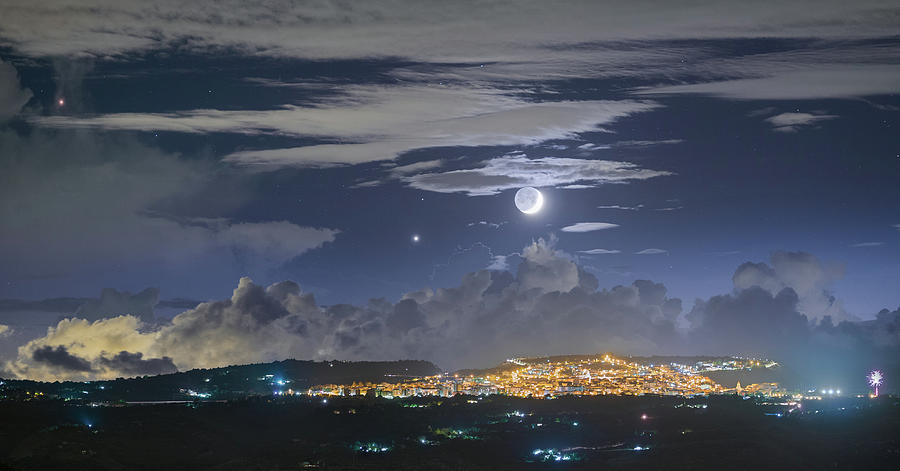 Earthshine Moon Venus And Antares Above Palazzolo Acreide - Unes is a photograph by Dario Giannobile which was uploaded on October 16th, 2021.

Palazzolo Acreide, a city belonging to the Val di Noto district and a UNESCO World Heritage Site, has a very ancient historical tradition. It was... more

Palazzolo Acreide, a city belonging to the Val di Noto district and a UNESCO World Heritage Site, has a very ancient historical tradition. It was born as a Syracusan colony around 664 BC. Numerous testimonies of the ancient city are preserved, in particular an important theatrical building and a complex of buildings adjacent to the Greek-Roman agora. Over time the cultural stratifications have overlapped, among all the art of Sicilian Baroque stands out, of which it is still possible to observe the beauty in different buildings and different churches such as the church of San Sebastiano and that of San Polo. Precisely the Sicilian Baroque that earned the city the Unesco honor. The evening is cool, the weather is variable as it should be on an autumn day. Almost all of Sicily is shrouded in clouds except for a small portion of the sky exactly above Palazzolo Acreide. It is the right occasion to photograph the lunar sickle in alignment with Venus and the star Dschubba of the constellation of Scorpio. A little to the left, however, the picture is completed by the star Antares. The scene is made extremely dramatic by the presence of several clouds. Some of them, almost three-dimensional, seem to adorn the hilly horizon. In the vicinity some veils are illuminated by the lunar rays. Finally, a firework, as befits the folkloristic tradition of Palazzolo, seems to welcome the encounter between the town and the celestial stars.