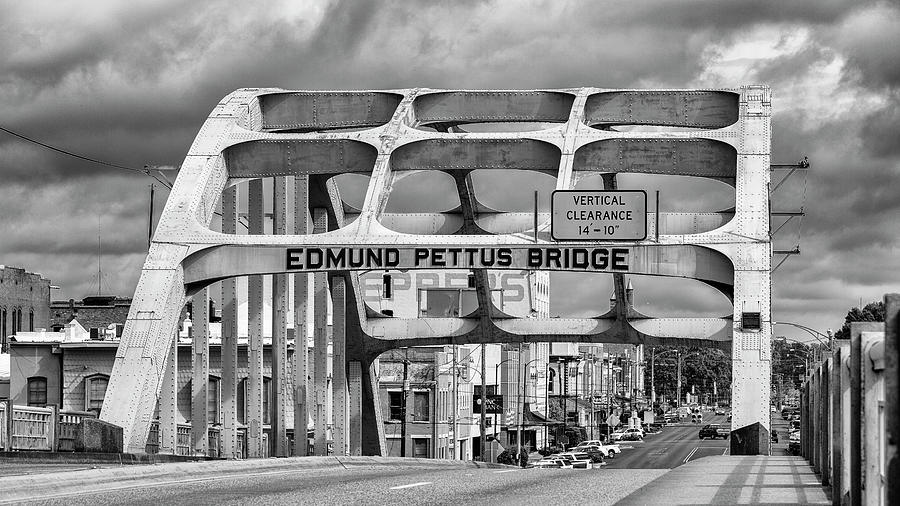 Edmund Pettus Bridge - Selma is a photograph by Stephen Stookey which was uploaded on June 6th, 2017.

The historic Edmund Pettus Bridge in Selma, Alabama, carries US 80 over the Alabama River. The bridge attracted national attention when peaceful... more

The historic Edmund Pettus Bridge in Selma, Alabama, carries US 80 over the Alabama River. The bridge attracted national attention when peaceful protesters, seeking voting rights for Black Americans, were met by Alabama State Troopers and County Deputies brandishing billy clubs and tear gas. Protesters planned to march 54 miles from Selma to Montgomery (Alabama's capital) in hopes of lobbying Gov. George Wallace. The horrific events at the bridge on Bloody Sunday (March 7, 1965) shocked the nation. News footage of the brutal confrontation was flown from Selma to NYC where ABC interrupted its much anticipated "Judgement at Nuremberg" to air the footage from Selma. Americans were horrified by the events in Selma, accelerating pressure on Congress for further civil rights reforms, including passage and signing of the Voting Rights Act in August of 1965.

"Bloody Sunday" was the first of three attempts to initiate the Selma-to-Montgomery March. The march began at Brown Chapel AME Church in Selma and was planned to follow US Highway 80--then know in Alabama as Jefferson Davis Highway) to the state capital. Edmund Pettus Bridge, over the Alabama River, marked the line between city and county jurisdiction. As protester reached the bridge crest they were meet with the sight of helmeted State Troppers and Sheriff deputies. Martin Luther King, JR., led a second march on March 10, to the bridge and back to Brown Chapel. The third march began on March 21 under protection of the federalized Alabama National Guard, FBI agents, and US Marshals. The marchers averaged 10 miles per day, arriving at the Alabama State Capitol on March 25.

The Edmund Pettus Bridge, named for a former Confederate general, Alabama Senator, and Grand Dragon of the Alabama Ku Klux Klan, now stands as one of America's most iconic symbols for the Civil Rights movement. The route today is designated by the National Park Service as the "Selma to Montgomery Voting Rights Trail, a U.S. National Historic Trail.

Thank you to the recent buyer in Crowley, TX!

Thank you to the recent buyer in Minneapolis, MN!

Excellent capture and artwork! Congratulations on your features! Fl

CONGRATULATIONS! This piece has been FEATURED on the homepage of the group No Place Like Home, 8/01/2020! Way to go! Please post it in the Group's Features discussion thread for posterity and/or any other thread that fits!

Thank you to the recent buyer in Decatur, AL!

Thank you to the recent buyer in New Orleans, LA!

Stephen, Congrats on your sale