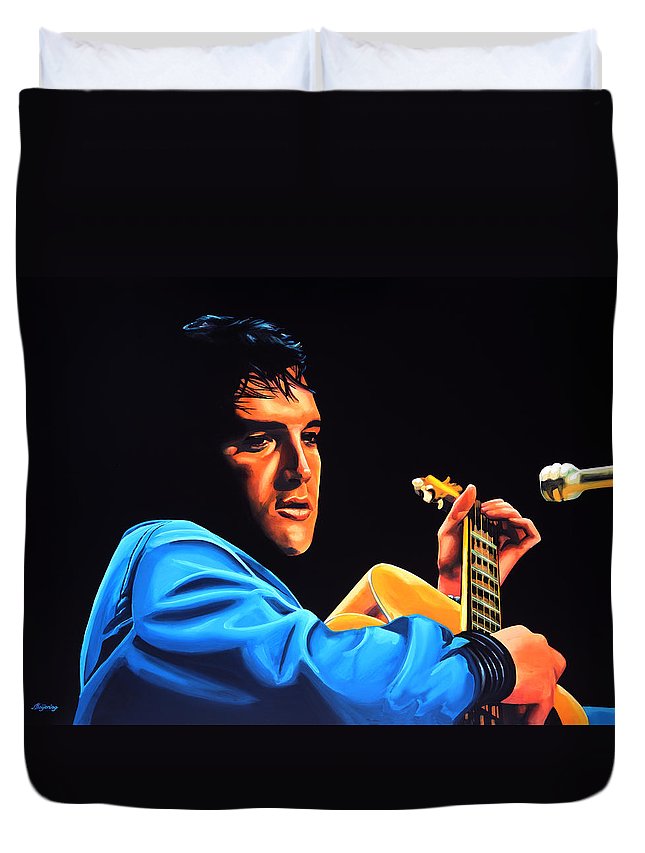 Queen duvet cover (88" x 88") featuring the image "Elvis Presley 2 Painting" by Paul Meijering. Our soft microfiber duvet covers are hand sewn and include a hidden zipper for easy washing and assembly. Your selected image is printed on the top surface with a soft white surface underneath. All duvet covers are machine washable with cold water and a mild detergent.

My son picked out which design he liked best and he loves it. Great quality duvet cover, very soft material.

I love he colors and the swans

Love it!! It looks great and feels even better. My only wish is that European measures would have been supported too. The width is a bit bigger than my insert. Great artwork!

I was looking for something that would hide my large screen television and also provide a bit of sound absorption as well. These duvet covers not only fit the bill the record album cover art was perfect for the room. Duvet covers are attached to twelve feet of room divider tracks so I can easily slide them out of the way when we want to watch the television.

I absolutely love this cover. It is perfect! I have washed it 2 times and have had no bleeding which with red I was iffy. But none! Washed with whites also 🙌🏼 I know brave. Thank you so much I get to sleep covered with the Word of the Lord! Nothing beats that ! And my husband and I get ministered with the word every day!

Beautiful work, it looks amazing and the fabric is also so soft. Quality A+++

Elvis Presley (2) - realistic acrylic painting by the Dutch fine artist Paul Meijering - The Original painting is 90 x 120 cm and SOLD Elvis Aaron Presley (January 8, 1935 - August 16, 1977) was an American musician and actor. Regarded as one of the most significant cultural icons of the 20th century, he is often referred to as "the King of Rock and Roll", or simply, "the King". Presley was born in Tupelo, Mississippi, as a twinless twin, and when he was 13 years old, he and his family relocated to Memphis, Tennessee. His music career began there in 1954, when he recorded a song with producer Sam Phillips at Sun Records. Accompanied by guitarist Scotty Moore and bassist Bill Black, Presley was an early popularizer of rockabilly, an uptempo, backbeat-driven fusion of country music and rhythm and blues. RCA Victor acquired his contract in a deal arranged by Colonel Tom Parker, who managed the singer for more than two decades. Presley's first RCA single, "Heartbreak Hotel", was released...