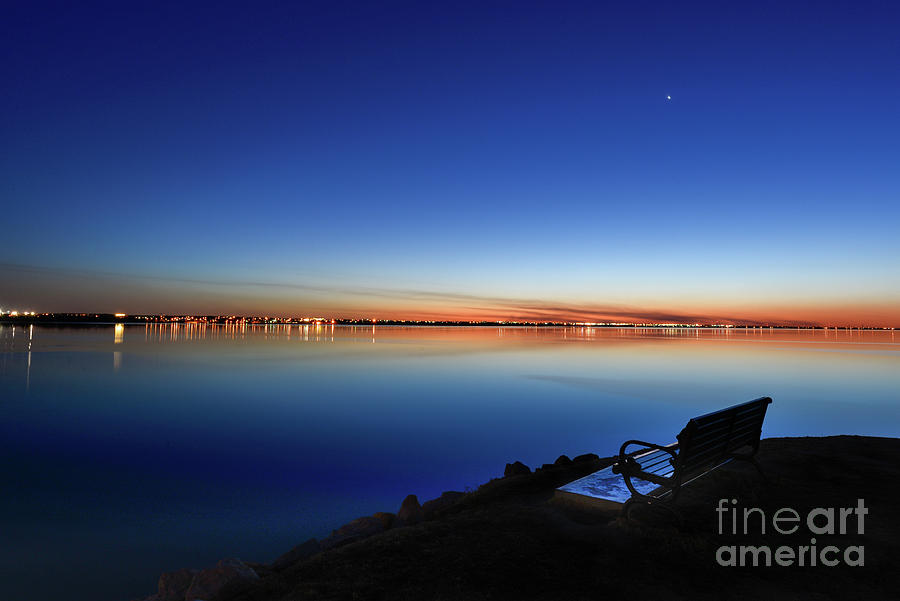 Empty seat watching the moon is a photograph by Paul Quinn which was uploaded on September 2nd, 2017.

On any other night this might have been a boring or dull scene. The sunset was certainly nice but unspectacular. This night, while no one was... more

On any other night this might have been a boring or dull scene. The sunset was certainly nice but unspectacular. This night, while no one was sitting on the bench, the colors and reflections were just amazing. The deep blue and orange hue was almost spellbinding. The water reflections are almost a mirror image between the sky and the still and reflective water. For this photograph, the color has not been modified or saturated in any way. It was really this dynamic. I sat mesmerized for quite some time hoping someone would appear and sit on the bench to give it more of a personalized look but as luck would have it no one did. This lake was perfectly still all night. There was no sound, no people, no lights just pure calm. It was wonderful.

I took this shot at Hefner Lake in Oklahoma City expecting nothing since it was so dark but, I really hoped it would expose somewhat close to what I was a seeing. I almost forgot about this image as there were others I shot on this night I was more interested in. I went back through my shots a few weeks later and was happily stunned to see this image. Not only did it come out as I had hoped, the colors were spectacular. I hope you enjoy this as much as i do and as much as I enjoyed taking it.

As featured in the following FAA groups:

Paul, Congrats on your sale