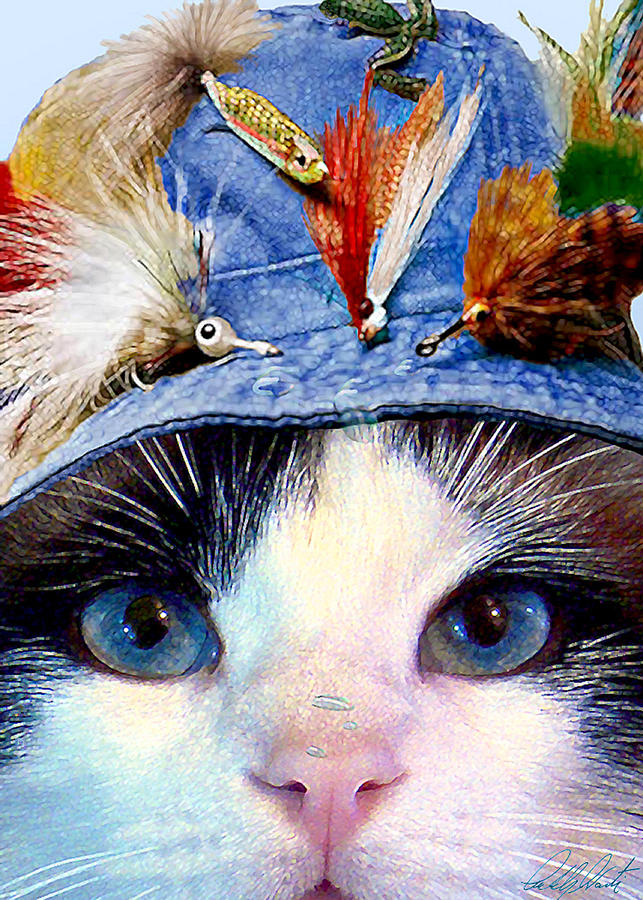 Fisher Cat is a mixed media by Michele Avanti which was uploaded on September 6th, 2014.

Fisher Cat from Cats In Hats series, Michele Avanti,
Doing his best to catch a fish, Mr. Vanilla Mousse, gets splashed. He is a true fisherman with his lures proudly displayed on his rugged denim hat. I hope he makes you smile!

The Snowshoe is a rare breed of cat originating in the United States of America in the 1960s. Snowshoes were first produced in Philadelphia when a Siamese breeder's cat gave birth to three kittens with white feet. The breeder, Dorothy Hinds-Daugherty, then began a breeding program to produce what were originally called "Silver Laces",[1] crossing the strangely marked Siamese cats with bi-color American Shorthair cats and other breeds. When Hinds-Daugherty left the program, Vikki Olander began working with the cats and recruited new breeders, as well as worked towards full recognition within cat associations. Despite having existed for 45 years, Snowshoes are rare due to the difficulty of reproducing the correct coat markings. The marks are based on recessive genes for color points and on the co-dominant but variably-expressed piebald pattern gene, making it difficult to predict the appearance of offspring.

The coat coloration recognized by registries and associations is point coloration, and it comes in a variety of colors, though some organizations do not recognize certain colors. Snowshoe cats have an affectionate and docile disposition. Due to this, they do not do well under circumstances where they are left alone for long periods of time. Snowshoes are also very vocal, though their voices are not as loud as the Siamese, a cat found in their breed heritage. They are noted as being very intelligent and have the ability to learn tricks and open doors. These cats also enjoy water, and may swim.

A fishing lure is a type of artificial fishing bait which is designed to attract a fish's attention. The lure uses movement, vibration, flash and color to bait fish. Many lures are equipped with one or more hooks that are used to catch fish when they strike the lure. Some lures are placed to attract fish so a spear can be impaled into the fish or so the fish can be captured by hand. Most lures are attached to the end of a fishing line and have various styles of hooks attached to the body and are designed to elicit a strike resulting in a hookset. Many lures are commercially made but some are hand made such as fishing flies. Hand tying fly lures to match the hatch is considered a challenge by many amateur entomologists.
Modern commercial lures usually are often used with a fishing rod and fishing reel but there are some who use a technique where they hold the line in their hands. Handlining is an technique in which the line is held directly in the hands versus being fed through the guides of a fishing rod. Longlining also can employ lures to catch fish. When a lure is used for casting, it is continually cast out and retrieved, the retrieve making the lure swim or produce a popping action. A skilled angler can explore many possible hiding places for fish through lure casting such as under logs and on flats.

Delightful! Voted your entry in the Cats contest. Lf

Awesome! Thank you so much, Kay!

Your collection of Cats in Hats is so wonderful, Michele! I liked all of them!

Thanks so much for visiting, Anna!

Thank you so much, Dee!

Thank you! I hope it made you smile!

Gorgeous color balance and charming eyes and face. What a hat! Vote in the Hat contest and favorite :-)

Thank you, Nancy! I am honored!

I love the creativity on your site, of course if your cat wore a hat if would be tangled full of fishing lures & tied colored flies, I am, I am ! +fav

Thank you so much for visiting, Thomas. My cat Moussie is a true fishercat.. he does that in our aquarium mostly. lol.

Congratulations, your creative and unique art work is featured in the "Out Of The Ordinary 1 A Day" group! 7/13/16

Congrats on another win Michele!

Thank you so much, Carol! My dear Mr. Moussie has certainly won some hearts this week!

This is wonderful Michele! Congrats on winning the Cats contest. l/f

Thank you so much, Renee!

What a fashionable cat!

Amazing beauty! I want to kiss this pretty Fisher cat!

What a doll baby, Michele!! l/f

Thank you, Lisa.. he is also my dear precious loving kitty.

Beautiful and fun cat-- congrats on your win Michael! L,F