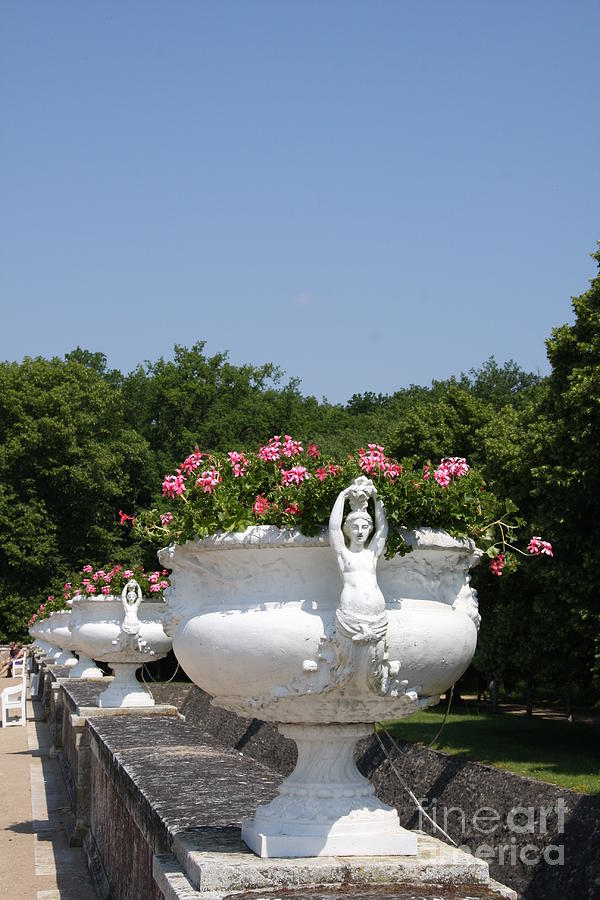 Flowerpots In A Row - Chateau Chenonceau is a photograph by Christiane Schulze Art And Photography which was uploaded on February 10th, 2010.

Flowerpots In A Row - Chateau Chenonceau

Flowerpots In A Row - Chateau Chenonceau

Copyright: Christiane Schulze
The original chateau was torched in 1412 to punish owner Jean Marques for an act of sedition. He rebuilt a chateau and fortified mill on the site in the 1430s. Subsequently, his indebted heir Pierre Marques sold the castle to Thomas Bohier (fr) Chamberlain for King Charles VIII of France in 1513. Bohier destroyed the castle, though its 15th-century keep was left standing, and built an entirely new residence between 1515 and 1521. The work was sometimes overseen by his wife Katherine Bri�onnet,[1] who delighted in hosting French nobility, including King Francis I on two occasions.

In 1535 the ch�teau was seized from Bohier's son by King Francis I of France for unpaid debts to the Crown; after Francis' death in 1547, Henry II offered the ch�teau as a gift to his mistress, Diane de Poitiers, who became fervently attached to the ch�teau along the river.[2] In 1555 she commissioned Philibert de l'Orme to build the arched bridge joining the ch�teau to its opposite bank.[3] Diane then oversaw the planting of extensive flower and vegetable gardens along with a variety of fruit trees. Set along the banks of the river, but buttressed from flooding by stone terraces, the exquisite gardens were laid out in four triangles.

Diane de Poitiers was the unquestioned mistress of the castle, but ownership remained with the crown until 1555, when years of delicate legal maneuvers finally yielded possession to her. However, after King Henry II died in 1559, his strong-willed widow and regent Catherine de' Medici forced Diane to exchange it for the Ch�teau Chaumont. Queen Catherine then made Chenonceau her own favorite residence, adding a new series of gardens.
From Wikipedia