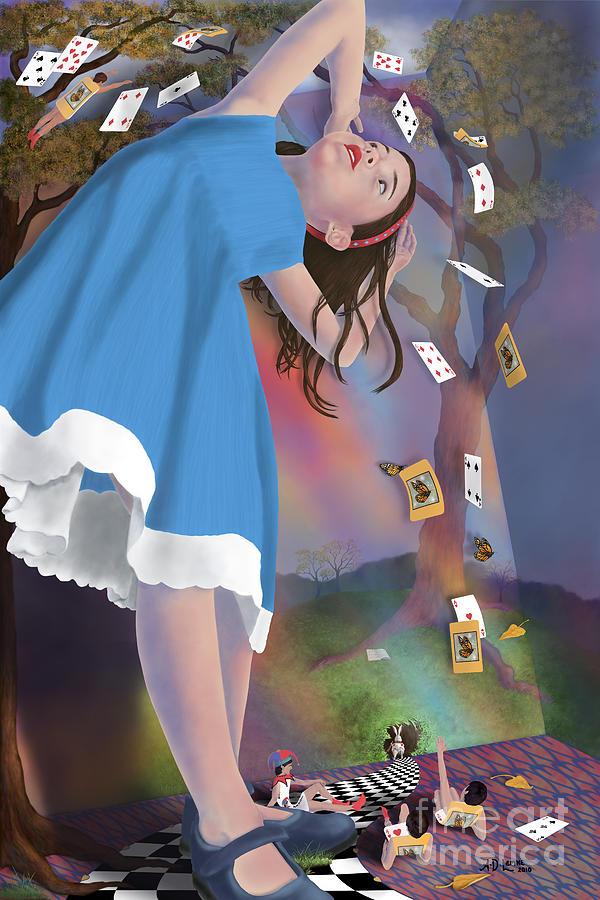 Flying Cards Dissolve Alice's Dream is a piece of digital artwork by Audra Lemke which was uploaded on May 9th, 2012.

Note: Watermark will not appear in the printed image!... more

Note: Watermark will not appear in the printed image!
This is a digital painting (plus a few uses of warping and vector pen tool) inspired by Alice's Adventures in Wonderland. The Queen shouts 'Off with her head!' The pack of cards come flying down upon Alice. Her dream is ending. The cards and Wonderland are transforming. Copyright 2010 Audra D. Lemke (a.k.a. ArtByAud).

Lovely work! Keep creating, the sales will follow. Also seen in 'Out of the Ordinary', whimsical discussion. L/F.

This is just amazing, Audra! All your gallery is actually delightful. I saw your comment in the "Out of Ordinary - Whimsical discussion", and I sure understand you. I wish you sell all your wonderful art. l,f

Thank you, Britta! Such sweet feedback! I'm happy you like my artwork!

I appreciate the great feedback, Dagmar! Thank you!

CONGRATULATIONS Audra, I have chosen this excellent unique and creative image to be "SHOWCASED" at the top of the Home Page in the "Out Of The Ordinary 1 A Day" group! 7/13/16 7/31/16

Thank you so much for the feature and especially the SHOWCASE! I just stopped by the group and saw the special showcase section on the home page. Awesome!

Thank you for the feature and compliment, Daniel!

Thank you so much for stopping by to see my work, Joe!

wow....such a wonderful painting. I love all the attention to detail and the way that you have used so many interesting angles to the claustrophobic area. f/w/v

Thank you for your lovely comment and support AnnaJo!

This is wonderful! F!

Much appreciated, Becky! Thanks!

Thank you so much Theresa! I value your feedback! :-)

Absolutely phenomenal image! Love everything about it, but especially impressed by how you composed it and part of the backround being made to appear like a painting. Really outstanding work! v/f

Thanks for stopping by Rory with such a supportive comment! I appreciate your kind words and feedback!

This is a neat image. Enjoyed looking at it!

Thank you so much Louise!

I already commented but have to agree with Douglass Fromm, just a wonderful image!

Thanks again Penny! I appreciate your support and stopping by a second time! :-)

Congratulations are in order....I voted for quite a few entries in the contest that were visually appealing, including this one, which has the best narrative quality.....it tells quite a story!

Thank you so much Elizabeth!

Thank you Kristin for featured this Wonderland artwork in the GroupsContest Winners First Place on FineArtAmericaHome group!! So wonderful!

Congrats!!! I think this ones VERY cool! Very imaginative!

Been away for a week. but, Congrats.. Fantastic Art work.. xoxoxox.. Keep up the great art.. The world needs you .. PEACE xoxoxo

Congrats on Your Winning - I love everything about this artwork...specially the magic :) V!

Thank you Elizabeth! I truly appreciate it!

Congratulations Audra! I loved your depiction of Alice. You had my vote.

I'm so happy you like my Alice! :-) Thanks for your support Laura!

Hi Audra... congrats on your fantastic first place win. A remarkable image with great details and a well deserved win!

Thank you Lucia! Congrats to you too for placing. Your work is wonderful! I appreciate your supportive comments!