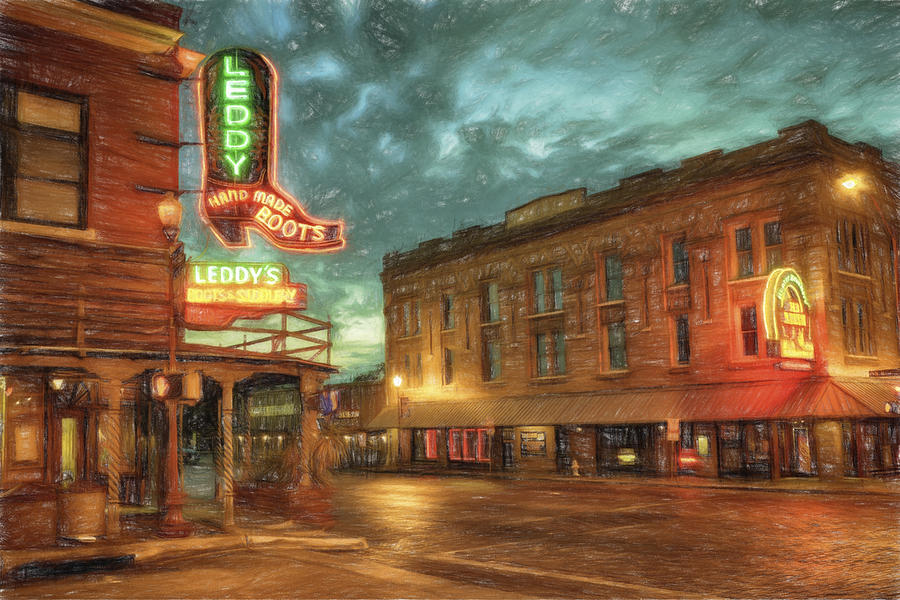 Fort Worth Impressions Main and Exchange is a photograph by Joan Carroll which was uploaded on March 23rd, 2015.

Fort Worth Impressions Main and Exchange

The early morning dawn at the corner of Main and Exchange streets in the historic stockyards of Fort Worth TX reveals two landmarks, Leddy's and H3.... more

Fort Worth Impressions Main and Exchange

The early morning dawn at the corner of Main and Exchange streets in the historic stockyards of Fort Worth TX reveals two landmarks, Leddy's and H3. A visit to Leddy's is a must if you are interested in finely crafted western boots! Leddy's is a legendary company, as detailed at its website. "M.L. Leddy may not have had aspirations of an international reputation when he left his family cotton farm in 1918; and he probably did not envision icon status when four years later he purchased the saddle and boot shop where he had been working in the small west Texas town of Brady. However, with self taught talent and the help of his brothers, M.L. achieved all of that and more. In 1922, saddle making and boot making were common trades. What distinguished the Leddy brothers from other craftsmen was their desire to make only the best, and offer that product with unparalleled customer service. That "Leddy" standard quickly became a tradition. By 1936, their reputation exceeded their borders and they moved their business to San Angelo, Texas. Demand for their products continued to expand and a second location was opened in the historic Forth Worth Stockyards in 1941.In the early 1950's the decision was made by M. L.'s sons, Dale and Hollis and his son-in-law, Jim Franklin, to purchase the business from it's founders. By 1986, M.L.'s grandson, Wilson Franklin, continued the tradition of family ownership and M.L.'s dream of it remaining a family operation continues today with fourth generation family members working in the business. The expert level of detail and skill given to every custom handmade boot, saddle and leather product has and continues to set M.L. Leddy's apart. Leddy's unrivaled level of quality and service is bestowed upon each and every customer. Neighbors, Kings and Presidents are all treated to the same type of Texas hospitality. A visit to M.L. Leddy's is like a trip back in time, where old fashioned values are refreshingly new again. Each day, Leddy's invites the next generation of customers to add their own story to the pages of it's rich history" On the opposite corner :Hunter Brothers' H3 Ranch, Live Hickory Wood Grill offers a wide variety of steaks, rainbow trout, lip-smackin' ribs, chicken, spit-roasted pig and much more - all served with a smile in comfortable, casually upscale surroundings".

thank you Romuald for the feature in the Arts Fantastic World group, 7/28/19

Congratulations Joan, your work is Featured in "Photographic Camera Art" I invite you to place it in the group's "2019 Featured Image Archive" Discussion!! L/Tweet!

One of your peers nominated this image in the 1000 views Groups nominated images by your fellow artist in the Special Features #11 promotion discussion. Please visit and pass on the love to another artist.

Such a wonderful image. Nominated for a feature in the 1000 Views group

thank you Greg and Chrystal!

Congrats on your sale Joan!!

Congrats on your sale, Joan