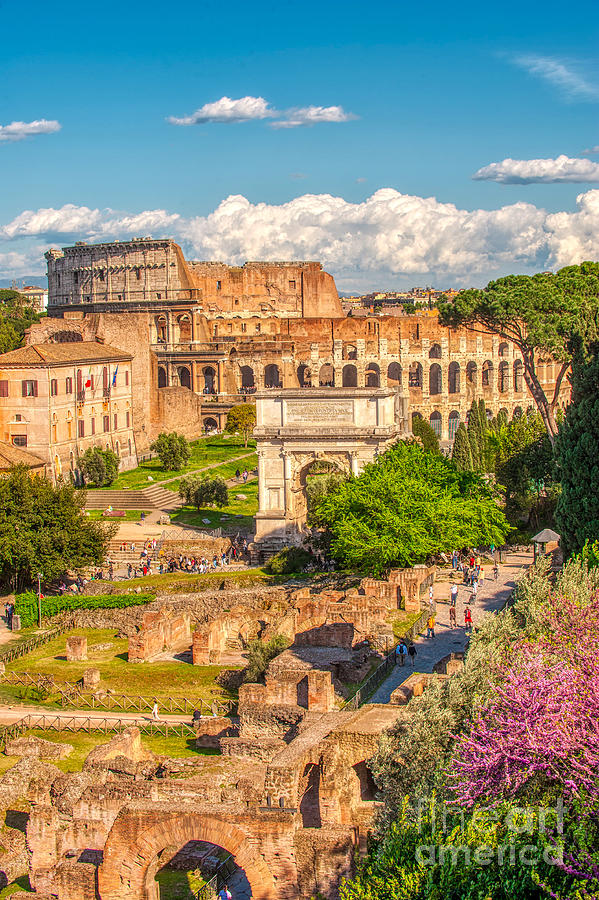 Forum Romanum with The Colosseum in the background is a photograph by Stefano Senise Wall Art of Italy which was uploaded on March 4th, 2021.

Forum Romanum with The Colosseum in the background

Forum Romanum with The Colosseum in the background
in Rome, Italy.

The Roman Forum, also known as the Forum Romanum in Latin, was a venue... more

Forum Romanum with The Colosseum in the background

Forum Romanum with The Colosseum in the background
in Rome, Italy.

The Roman Forum, also known as the Forum Romanum in Latin, was a venue in the ancient city of Rome that hosted important religious, political, and social events. Historians believe that the open-air Forum was initially used for public gatherings around 500 B.C., when the Roman Republic was created. Between Palatine Hill and Capitan Hill is a rectangular-shaped area situated on low-lying ground.
Many of the ancient city's most remarkable temples and monuments were located in this rectangular-shaped area between Palatine Hill and Capitoline Hill, on low-lying soil. The Roman Forum is now one of the most visited tourist attractions in the world, with over 4.5 million tourists each year.

The Forum housed a number of significant structures, statues, and monuments. Some temples were dedicated to gods or goddesses, while others were created to celebrate men.

The following are some of the most well-known constructions in the Roman Forum:

Senate House: The Senate House, also known as the "Curia," was the Roman Senate's council house and a venue for many political activities. The Curia was restored multiple times before being turned into a church in the seventh century.

Temple of Saturn: The original Temple of Saturn was constructed around 498 B.C. and is regarded one of the Roman Forum's first temples. Years later, it was reconstructed, and the existing remains date from around 42 B.C. This structure was devoted to Saturn, the god of agriculture, and served as a treasury, storing and managing Rome's money.

The Emperor Domitian built the Arch of Titus in 81 A.D. to honor his brother, Emperor Titus, who had won the Siege of Jerusalem.


Thank you For Visiting!
� Copyright (Stefano Senise) All Rights Reserved. COPYRIGHT NOTICE:
MacXever(Stefano Senise) photography retains all rights to her images. It is illegal to copy, scan or duplicate from the website in any form.
Images on this site may not be used for personal or commercial use without written permission by Stefano Senise.

Nota Bene: The 'Fine Art America' watermark in the lower right corner of these pictures will not appear on your prints, licensed downloads, or other products.

Congrats! This photo has been featured on the •UNESCO World Heritage Sites• group on FAA/Pixels. ||| Featured images are capped around 30, so you are invited to archive your photo to the "2021 Features!" discussion topic.

Love all the detail in this scene!

Oh my goodness, Stefano, this is awesome. f/l

What a beautiful photograph, Stefano! The angle of the view is so well done.