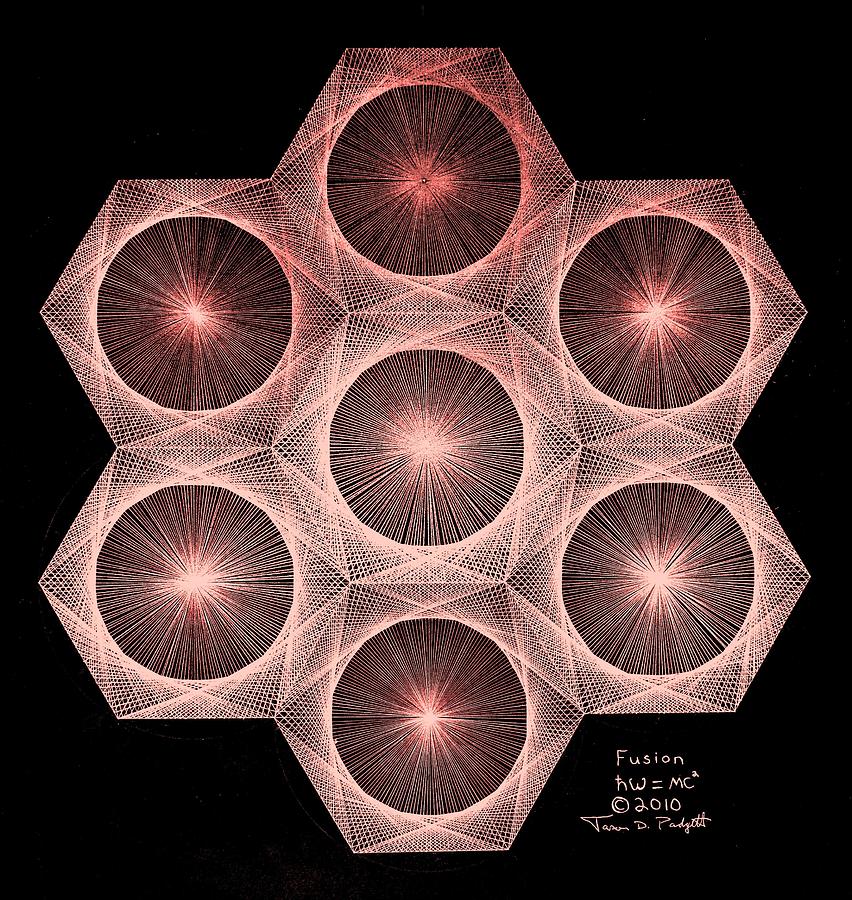 Fractal Fusion hw Equals mc squared is a drawing by Jason Padgett which was uploaded on June 18th, 2010.

Space time, if quantized or discrete is restricted to certain pathways, or as quantum mechanics teaches, space has degrees of freedom. These... more

Space time, if quantized or discrete is restricted to certain pathways, or as quantum mechanics teaches, "space has degrees of freedom". These restrictions (the geometry of space time), combined with mass and gravity, create the enormous pressure needed to get atoms close enough that the strong nuclear force takes over and begins fusing the elements. Hydrogen then Helium etc. This process continues as the star, through fusion, creates heavier and heavier elements which are layered like an onion due to the mass of the elements. Every star is a giant fusion reactor, with massive amount of energy being created through the process of fusion.

Massive stars generate energy by the nuclear fusion of elements (fusion makes larger elements and releases much more energy than fission which is splitting atoms. Unlike our Star, the Sun, these massive stars possess the mass needed to fuse elements that have an atomic mass greater than hydrogen and helium. So imagine a giant fusion explosion held together by the degeneracy pressure of electrons and the energy generated by these fusion reactions. This is sufficient to counter the force of gravity and prevent the star from collapsing. The star fuses increasingly higher mass elements, from hydrogen to helium and on, until finally a core of iron and nickel is made. Fusion of iron or nickel does not produce any net energy, so further fusion can't happen, leaving the nickel-iron core inert.

When the mass of the inert core exceeds the Chandrasekhar limit of about 1.4 solar masses, electron degeneracy alone is no longer able to counter gravity. A massive implosion then takes place within seconds, in which the outer core reaches an inward velocity of up to 23% of the speed of light and the inner core reaches temperatures of up to 100 billion kelvin. Neutrons and neutrinos are formed via reversed beta-decay, releasing about 1046 joules (100 foes) in a ten-second burst. The collapse is halted by neutron degeneracy, causing the implosion to bounce outward. The energy of this expanding shock wave is sufficient to detach the surrounding stellar material, forming a supernova explosion, while the shock wave and extreme conditions briefly allows the production of elements heavier than iron. So every bit of gold, silver, platinum etc (elements heavier than Iron) were created in a super nova through fusion literally. Every ring or gold necklace etc came from a super nova. I find that amazing! :)

The universe is so beautiful and wonderous and with all the amazing scientists working on understanding these processes we may someday be able to have controled fusion and have unlimited, clean energy. When will we make these breakthroughs needed? I hope soon. Somewhere there is a brilliant mind or several brilliant minds working on solving these problems.

So an easy way to think about fusion and this drawing is to picture the center hexagon as an inert iron core and the six surrounding hexagons is the surround mass of the star collapsing due to immense gravity towards the center (the iron core). When they hit the core from all sides at nearly the exact same time and at 23% the speed of light they fuse the iron core because of the immense pressure and heat and explode as a super nova. (There are different types of super nova but this is just the basic idea).

I will forever be in awe of the universe.

Amazing! Thank you for sharing this with us! Beautiful!

Congratulations on your sale Jason!

Just saw the article in RD and had to check out your portfolio...so amazing!!

CONGRATULATIONS ON UR SALE, LOVE, LAURIE

Congratulations on this fantastic sale.

It's been awhile since we looked at your excellent hand drawings. In your description you mentioned several person that won the Noble Prize... they know nothing in comparision to your precision, abilities, understanding and knowledge.