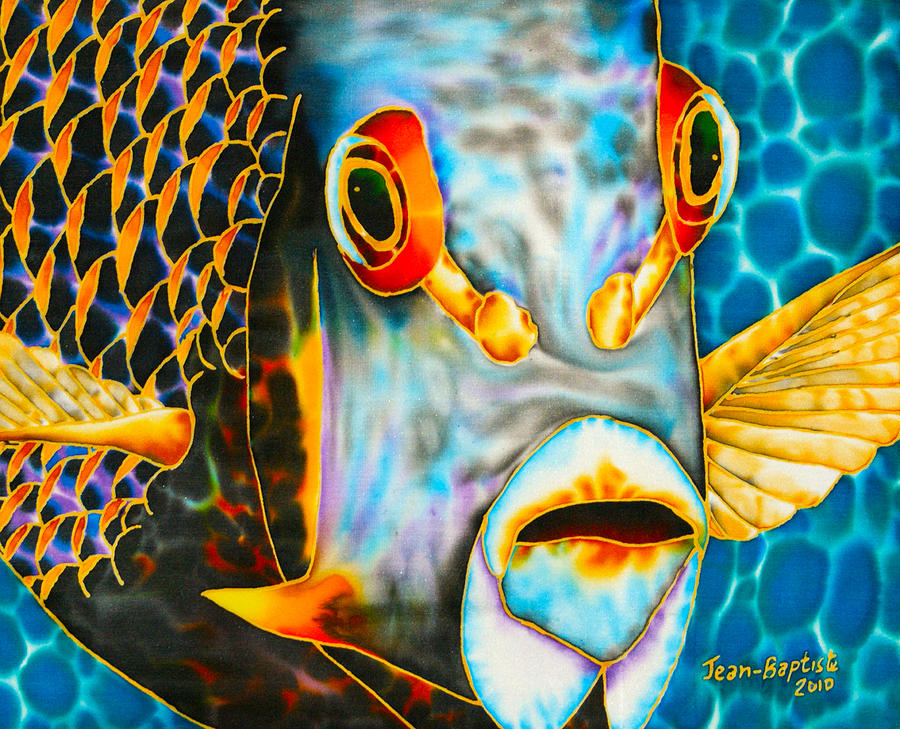 French Angelfish Face is a painting by Daniel Jean-Baptiste which was uploaded on June 24th, 2012.

The French angelfish (Pomacanthus paru) is a large angelfish of the family Pomacanthidae, found in the western Atlantic from New... more


The French angelfish (Pomacanthus paru) is a large angelfish of the family Pomacanthidae, found in the western Atlantic from New York and the Bahamas to Brazil, and also the Gulf of Mexico and the Caribbean, including the Antilles, Roatan, and the eastern Atlantic from around Ascension Island and St. Paul's Rocks, at depths of between 2 and 100 m. Length is up to 41 cm.
The French angelfish is common in shallow reefs, occurs usually in pairs often near sea fans. It feeds on sponges, algae, bryozoans, zoantharians, gorgonians and tunicates. Juveniles tend cleaning stations where they service a broad range of clients, including jacks, snappers, morays, grunts, surgeonfishes, and wrasses. At the station the cleaner displays a fluttering swimming and when cleaning it touches the clients with its pelvic fins.
The adult background coloration is black but the scales of the body, except those at the front from nape to abdomen, are rimmed with golden yellow. Furthermore, the pectoral fins have a broad orange-yellow bar, the dorsal filament is yellow, the chin is whitish, the outer part of the iris is yellow, and the eye is narrowly rimmed below with blue. Juveniles are black with vertical yellow bands.
This species is oviparous and monogamous. Spawning pairs are strongly territorial and usually both partners defend vigorously their territory against neighboring pairs. During the day you will mostly see these fish out and about, but come night they seek shelter in their designated hiding spot where they return every night.
The flesh of the French angel has good taste and the fish is sold on fish markets. The species has been reared in captivity.
Sponges constitute 70% of the species' diet and since sponges are plentiful the fish is normally well fed. It covers sponge pieces in thick mucous to help digestion.

A french angelfish posing with a display of beautiful gem like colours.

I would like to thank the buyer from Kings Park, NY, USA.

I would like to thank the art collector from Prospect for collecting my work.

Thanks Donna, your work is very powerful, following you.

Thanks Nola, your work is exceptional, I am following you.

Love your work Daniel! Congrats on your sale.

Thanks Kathleen, your work is so beautifully delicate, following.

Thanks Anastasiya, following you.