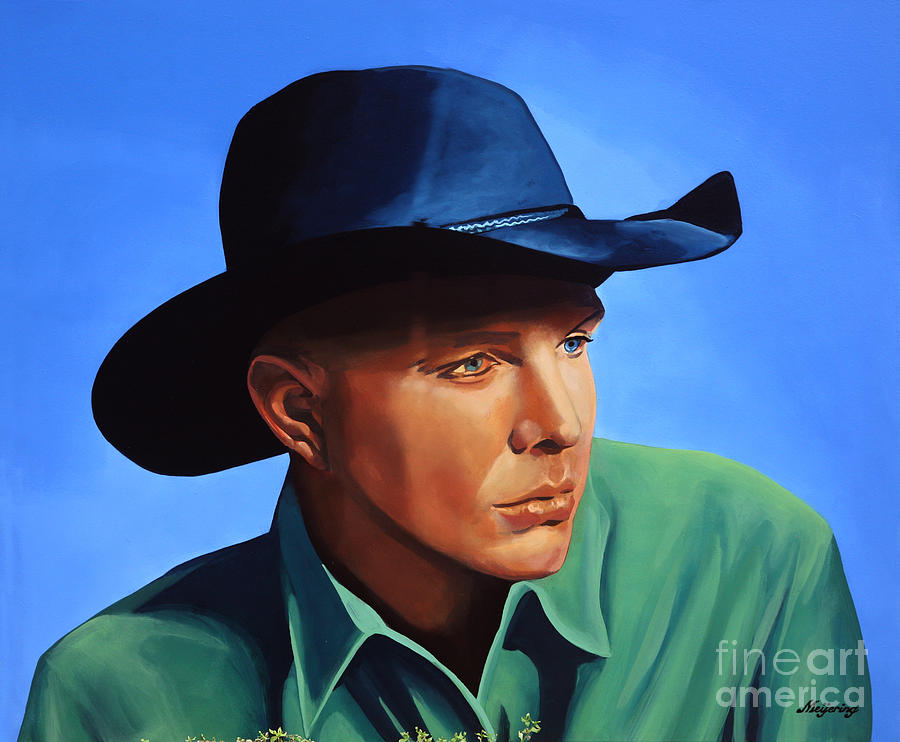 Garth Brooks is a painting by Paul Meijering which was uploaded on April 16th, 2012.

Troyal Garth Brooks (born February 7, 1962), best known as Garth Brooks, is an American country pop singer-songwriter. His eponymous first album was released in 1989 and peaked at number 2 in the US country album chart while climbing to number 13 on the Billboard 200 album chart. Brooks' integration of rock elements into his recordings and live performances earned him immense popularity. This progressive approach allowed him to dominate the country single and album charts while crossing over into the mainstream pop arena.

Brooks broke records for both sales and concert attendance throughout the 1990s. As of 2013, his recordings continue to sell well and, according to Nielsen Soundscan, his albums sales up to May 2013 are 68,630,000, which makes him the best-selling albums artist in the United States in the SoundScan era (since 1991), a title held since 1991, well over 5 million ahead of his nearest rival, the Beatles. According to RIAA he is the second best-selling solo albums artist in the United States of all time ahead of Elvis Presley (second to the Beatles) with 135 million units sold. Brooks is one of the world's best-selling artists of all time, having sold more than 150 million records.

Brooks has released six albums that achieved diamond status in the United States, those being: Garth Brooks (10￿platinum), No Fences (17￿platinum), Ropin' the Wind (14￿platinum), The Hits (10￿platinum), Sevens (10￿platinum) and Double Live (21￿platinum). Since 1989, Brooks has released 20 records in all, which include; 10 studio albums, 1 live album, 3 compilation albums, 3 Christmas albums and 3 box sets, along with 77 singles. He won several important awards in his career, including 2 Grammy Awards, 17 American Music Awards (including the "Artist of the '90s") and the RIAA Award as Best selling solo albums artist of the Century in the United States

What an excellent featured portrait!

Thank you so much, Sharon, for your kind words and compliments!!;-))...

Featured in The Creators Guild, fantastic image by an upstanding member.

Thank you so much, Ronda, for the feature and compliments!;-))

My all time favorite country artist. Grew up listening to him - saw him in Nashville - WHAT A CONCERT! :)

Thanks so much, Rachel!