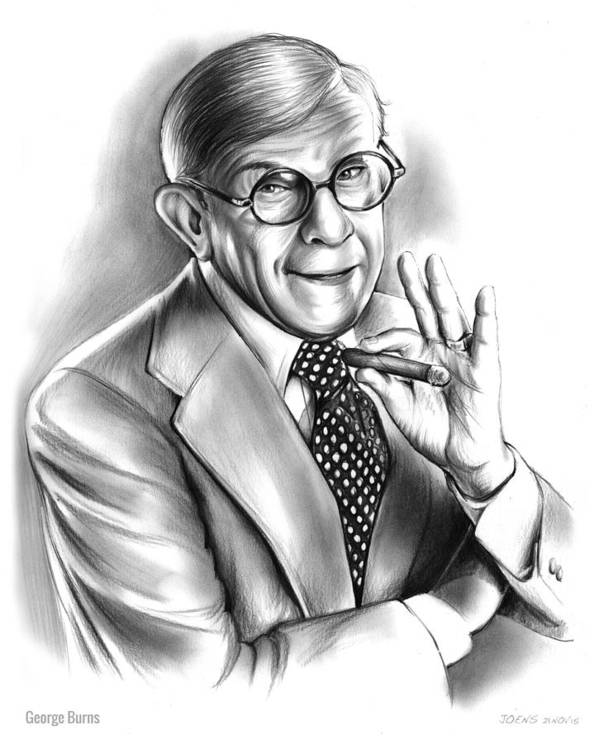 George Burns poster by Greg Joens.   Our posters are produced on acid-free papers using archival inks to guarantee that they last a lifetime without fading or loss of color. All posters include a 1" white border around the image to allow for future framing and matting, if desired.

Greg, you are truly talented! I have been browsing through your gallery and thoroughly enjoying it! Excellent art! L/F

It arrived in good condition. Thank you.

My wife and I met walking dogs, she had an unwrinkled rescued female Shar Pei, I had a chocolate Lab I raised from a pup. We are now on our 5th rescued Shar Pei and our 3rd Lab, it fits

I love Vincent James’ work. I chose this photo to give as a gift to my nephew who came to SF in August and proposed to his fiancé at the Golden Gate Bridge.

George Burns (January 20, 1896 � March 9, 1996), born Nathan Birnbaum, was an American comedian, actor, and writer. He was one of the few entertainers whose career successfully spanned vaudeville, film, radio, and television. His arched eyebrow and cigar-smoke punctuation became familiar trademarks for over three-quarters of a century. When Burns was 79, he had a sudden career revival as an amiable, beloved and unusually active comedy elder statesman in the 1975 film The Sunshine Boys, for which he won the Academy Award for Best Supporting Actor. He continued to work until shortly before his death, in 1996, at the age of 100, of cardiac arrest in his home. Source: Wikipedia