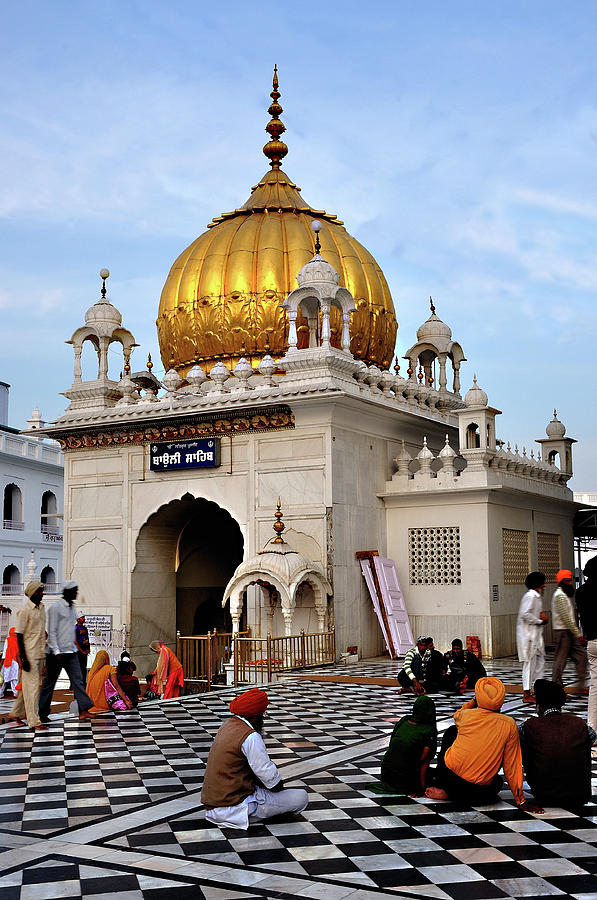 Goindwal Sahib is a photograph by Manjot Singh Sachdeva which was uploaded on June 17th, 2017.

GOINDVAL (31°22'N, 759'E), the firstever place of Sikh pilgrimage so designated by its founder, Guru Amar Das. This in fact was the spot where the... more

GOINDVAL (31°22'N, 75"9'E), the firstever place of Sikh pilgrimage so designated by its founder, Guru Amar Das. This in fact was the spot where the ancient eastwest highway crossed the River Beas. With the renovation of the highway by Sher Shalh Suri, the Afghan ruler of north India (1540-45), this ferry site became an important transit point. This led one Goinda or Gonda, a Marvaha Khatri trader, to plan establishing an habitation at the western end of the ferry. Thwarted in his endeavour by natural calamities which Goinda attributed to evil spirits, he repaired to Khadur to seek Guru Angad's blessing. The Guru deputed his devoted disciple, (Guru) Amar Das, to help Goinda. Amar Das, who knew that track very well as he had been carrying river water from this place to Khadur daily for his Master's ablutions, laid the foundation of a village which was named after Goinda. After his apointment as Guru in 1552, Guru Amar Das shifted from Khadur to Goindval. In 1552, Guru Amar Das commenced the digging in Goindval of a baoli, i.e. a well with steps descending down to water level which, when completed, attracted pilgrims from far and near. Goindval also became ,in the time of Guru Amar Das, the centre of an annual fair on the occasion of Baisakhi. Even after Guru Amar Das's successor. Guru Ram Das, had built up Amritsar and made it his permanent seat, devotees continued to visit Goindval to have a dip in the sacred baoli and pay homage at other local shrines.
Notable Locations

Baoli Sahib is to the left of the main asthan at Goindwal
SRI BAOLI SAHIB is a large, open well, 8 metres across. Its water level is reached through a covered passage comprising a flight of 84 steps. A wide pointed archway opens on a domed clearance, four steps below the ground level. Its cupola is painted with multicoloured floral designs and portraits of Guru Amar Das, Guru Ram Das, Guru Hargobind and Guru Gobind Singh. The area between the arch and the coping is covered with portraits of the Ten Gurus, and those of Baba Mohari, Baba Mohan and Baba Anand. Other paintings depict scenes from the life of Guru Amar Das. Most of the steps are covered with marble slabs donated by different devotees, the earliest of these being dated 1963 Bk/AD 1906. The lotus dome above the entrance has a tall gold-plated pinnacle with pinnacled kiosks and solid decorative domes around it.
THARA SAHIB SRI GURU AMAR DAS JI is a marblelined platform, with a pinnacled canopy of white marble supported on cylinderical columns, at the entrance to Sri Baoli Sahib. It marks the site where Guru Amar Das used to sit supervising the digging of the Baoli.
SRI DARBAR SAHIB or Prakash Asthan Sri Guru Granth Sahib Ji, adjacent to Sri Baoli Sahib, is a square hall with a sanctum in the centre where the Guru Granth Sahib is seated. daily congregations take place in this hall.
LANGAR SRI GURU AMAR DAS ji, in the vicinity of the Darbar Sahib, is a largesized refectory, with kitchens attached.
GURU AMAR DAS NIVAS, behind the Baoli Sahib, is a two-storeyed building providing lodging for pilgrims.
GURDWARA SRI CHUBARA SAHIB, in a different complex which was once the residence of Guru Amar Das and his family, is the attic in which the Guru himself lived. It is a small room with a still smaller room entered through it. The Guru Granth Sahib is seated in the front room on a silver pdlaki or portable canopied throne. This room has doors covered with silver. The interior is decorated with stucco work inset with reflccing glass pieces and intricate designs in many colours.
KILLI SAHIB, a small wooden peg (killi in Punjabi) now covered with a silver sheath, is fixed in the front wall of Sri Chubara Sahib on the outside. Guru Amar Das, it is said, used to meditate in the standing posture holding on to this peg for support. An embossed design on a brass plate above the Killi Sahib depicts Guru Nanak, flanked by Bhai Bala and Bhai Mardana, sitting under a tree. Another embossed sketch shows Guru Amar Das and his sons,