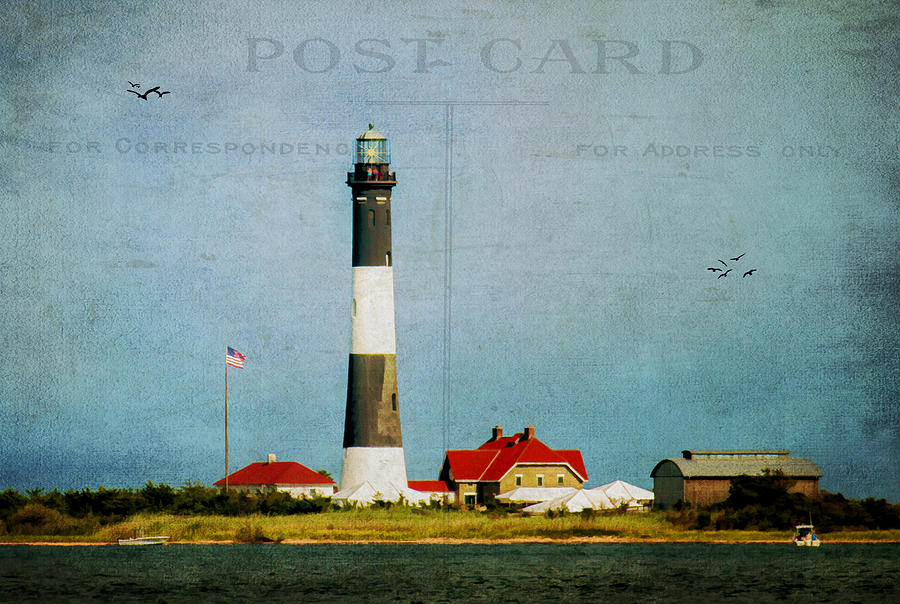 Greetings From Fire Island is a photograph by Cathy Kovarik which was uploaded on August 22nd, 2014.

Fire Island Light was an important landmark for transatlantic ships coming into New York Harbor at the turn of the last century. For many European... more

The first lighthouse built on Fire Island was completed in 1826. It was a 74-foot high, cream colored, octagonal pyramid made of Connecticut River blue split stone. The tower was built at the end of the island, adjacent to the inlet. This tower was not effective due to its lack of height. It was taken down and the stone was reused to build the terrace for the present lighthouse. Today a circular ring of bricks and stone are all that remain of the original lighthouse. Due to the westward migration of sand along the beach, known as littoral drift, the inlet is now approximately six miles westward of this site.

In 1857 Congress appropriated $40,000 for the construction of a new tower, 168 feet tall. It was lit for the first time on November 1, 1858. This tower was made of red brick, painted a creamy yellow color. The tower was changed to the present day-mark of alternating black and white bands in August 1891.

The new tower was fitted with a First Order Fresnel Lens, which emitted a white flash at one minute intervals. A Funk Lamp with 4 concentric wicks was used for illumination. Over the years various fuels were used for the lamps, including whale oil, lard oil, mineral oil and kerosene. Electricity finally reached the lighthouse on September 20, 1938. However, on September 21, 1938 a hurricane struck the island, effectively severing all electric power to the island and causing a delay in the electrification of the Fire Island Light Station. The United States Coast Guard has been present on Fire Island since its inception in 1915. A Coast Guard Station was established on the Lighthouse tract. Eventually the United States Lighthouse Service was dissolved. The administration of lighthouses was placed under the jurisdiction of the US Coast Guard in 1939 "in the interest of economy and efficiency" (Presidential Reorganization Act).

The Lighthouse was restored to its 1939 condition, which is when electricity was first installed. On Memorial Day, May 28, 1986, the Fire Island Lighthouse was relit and reinstated as an official aid to navigation.

Today the light is lit by two 1000-watt bulbs, which rotate in a counter-clockwise direction, giving the appearance of a flash every 7.5 seconds. The light is visible for approximately 21-24 miles.

In January 2006 FILPS took over the ownership and maintenance of the beacon from the United States Coast Guard. The beacon will continue to remain on all charts as a private aid to navigation.

I like the way you worked this Cathy, well done.

This is so cool how you did this Cathy! One of my favorite places :) LF