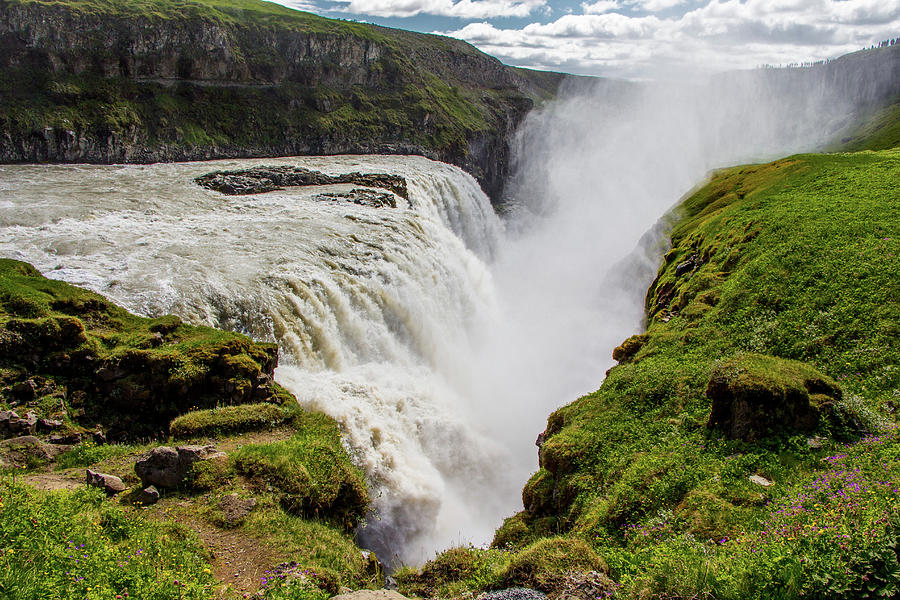 Gulfoss Waterfall, Iceland is a photograph by Venetia Featherstone-Witty which was uploaded on April 26th, 2021.

The Hvítá river flows southward, and about a kilometre above the falls it turns sharply to the right and flows down into a wide curved three-step... more

The Hvítá river flows southward, and about a kilometre above the falls it turns sharply to the right and flows down into a wide curved three-step "staircase" and then abruptly plunges in two stages (11 metres or 36 feet, and 21 metres or 69 feet) into a crevice 32 metres (105 ft) deep. The crevice, about 20 metres (66 ft) wide and 2.5 kilometres (1.6 mi) in length, extends perpendicular to the flow of the river. The average amount of water running down the waterfall is 141 cubic metres (5,000 cu ft) per second in the summer and 80 cubic metres (2,800 cu ft) per second in the winter. The highest flood measured was 2,000 cubic metres (71,000 cu ft) per second.

During the first half of the 20th century and some years into the late 20th century, there was much speculation about using Gullfoss to generate electricity. During this period, the waterfall was rented indirectly by its owners, Tómas Tómasson and Halldór Halldórsson, to foreign investors. However, the investors' attempts were unsuccessful, partly due to lack of money. The waterfall was later sold to the state of Iceland, and is now protected.
FEATURED 4/27/21 in "New FAA Uploads"
FEATURED 4/28/21 in "No Place Like Home"
FEATURED 4/29/21 in "Lady Photographers"
FEATURED 5/1/21 in "Your Very Best Photography"
FEATURED 5/12/21 in "Bedroom Art Gallery"
FEATURED 6/1/21 in "ABC Group - T is for Travel"

Congratulations! Your fantastic art has been featured on the ABC Group home page from the T IS FOR TRAVEL themed week, MAY 17, 2021- MAY 24,, 2021. You are invited to add your wonderful art in the Features Archive Discussion in the ABC GROUP as a way to preserve your feature!

Thank you very much for the feature, Pamela :)

Terrific image of this impressive waterfall!

Thank you very much Andrew!