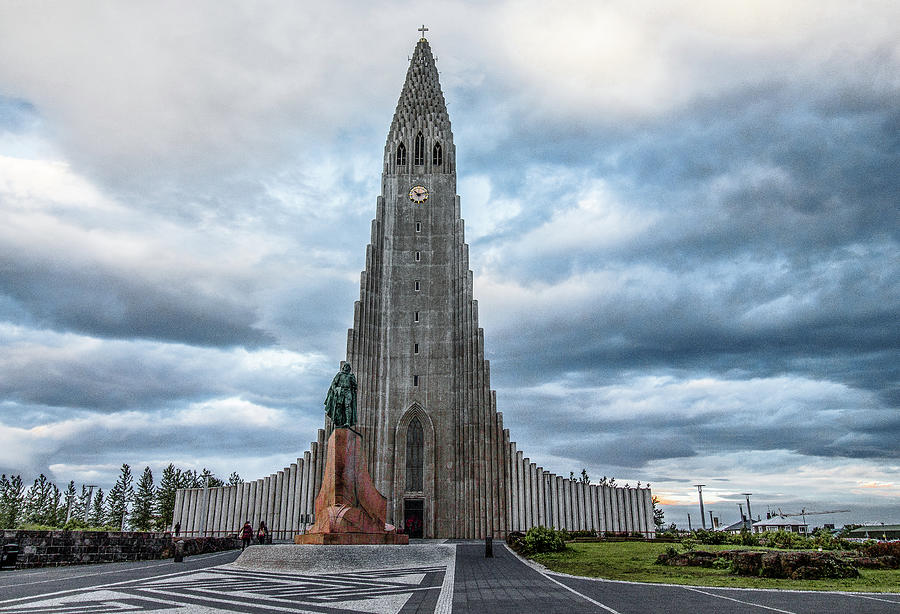 Hallgrimskirkja Lutheran Church, Iceland is a photograph by Venetia Featherstone-Witty which was uploaded on December 9th, 2019.

Hallgrimskirkja is a Lutheran (Church of Iceland) parish church in Reykjavík, Iceland. At 73 metres high (244 ft), it is the largest church in... more

Hallgrimskirkja is a Lutheran (Church of Iceland) parish church in Reykjavík, Iceland. At 73 metres high (244 ft), it is the largest church in Iceland and among the tallest structures in Iceland. The church is named after the Icelandic poet and clergyman Hallgrímur Petursson (1614-1674), author of the Passion Hymns,
Situated in the centre of Reykjavík, it is one of the city's best-known landmarks and is visible throughout the city. State Architect Guojon Samuelsson's design of the church was commissioned in 1937. He is said to have designed it to resemble the trap rocks, mountains and glaciers of Iceland's landscape. The design is similar in style to the expressionist architecture of Grundtvig's Church of Copenhagen, Denmark, completed in 1940.

It took 41 years to build the church: construction started in 1945 and ended in 1986, but the landmark tower being completed long before the whole church was completed. The crypt beneath the choir was consecrated in 1948, the steeple and wings were completed in 1974, and the nave was consecrated in 1986. At the time of construction, the building was criticized as too old-fashioned and as a blend of different architectural styles. The church was originally intended to be less tall, but the leaders of the Church of Iceland wanted a large spire so as to outshine Landakotskirkja (Landakot's Church), which was the cathedral of the Catholic Church in Iceland.
FEATURED 12/13/19 in "Lady Photographers"
FEATURED 12/15/19 in "Images That Excite You"
FEATURED 12/16/19 in "Out of the Ordinary"
FEATURED 12/17/19 in "Vacations"
FEATURED 12/17/19 in "New FAA Uploads"
FEATURED 12/22/19 in "Your Very Best Photography"
FEATURED 12/24/19 in "No Place Like Home"
FEATURED 12/26/19 in "World Landscape Lovers of Art
FEATURED 1/3/2020 in "Travel Art"
FEATURED 5/16/21 in "Bedroom Art Gallery"
FEATURED 5/26/21 in "ABC Geoup - Spires and Steeples"

Congratulations! Your fantastic art has been featured on the ABC Group home page from the S IS FOR SPIRE AND STEEPLE themed week, MAY 10, 2021- MAY 17,, 2021. You are invited to add your wonderful art in the Features Archive Discussion in the ABC GROUP.

Thank you very much for the feature, Pamela :)

Thank you very much Lynn!

Thank you very much Tatiana!

Thank you very much for the features, Jenny!

Thank you very much for the feature in Vacations, Cheryle!

Congratulations, your creative and unique art work is Featured on the homepage of the "Out Of The Ordinary 1 A Day" group! 12/16/19 l/f/pin

Thank you very much for the feature, Lyric!

Thank you very much, Karen, for the feature!