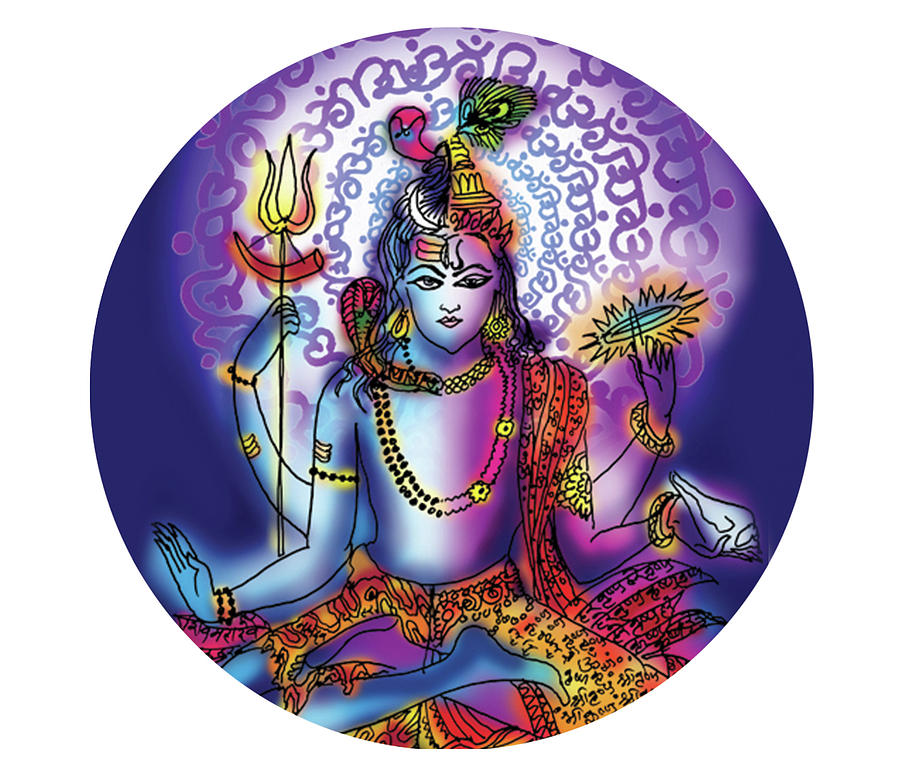 This painting is part of Spiritualism Art, which Shiva Guruji introduces as the first Indian Art Movement in the form of -ism. Spiritualism is... more


This painting is part of Spiritualism Art, which Shiva Guruji introduces as the first Indian Art Movement in the form of "-ism". Spiritualism is about going beyond the material dimension and touches your soul.

This painting depicts “Harihara”, with one half of Lord Shiva (Hara) and the other half of Lord Vishnu (Hari) or Krishna, an incarnation of Vishnu. Both are different forms of the formless, the divine, the Supreme God.

On the right side is written “Om Namah Shivaya” in Sanskrit and on the left Side “Hare Krishna Hare Krishna Krishna Krishna Hare Hare” and “Sri Krishna”. The mantras have an inherent spiritual power and help the seeker to realize their soul and innate divine potential.
Another name for “Harihara” is “Shankaranarayana” (Shankara means Shiva and Narayana is Vishnu).

Vishnu/Krishna represents the existence, the karma / kriya (=work) yoga and the aspect of a “bhogi”, someone who enjoys the pleasures in the world.
Shiva represents ananda, the ultimate bliss which is reached by means of Shiva Dhyan Yoga.

Shiva means SHIVA = Synergy Harmony Initiation Vastness Awakening Awareness
It is a concept for peace of mind and the entire humanity.

Attributes of Shiva
Shiva’s attributes have various meanings. Some of them are mentioned below:

White skin
Shiva is praised for having a white skin like a camphor or like an ice clad mountain. The white color is symbolic for the purity of heart, mind and the entire existence of Lord Shiva. It gives an example for the purity of thoughts and emotions.

Trishul (Trident)
Mostly Shiva is portrayed with a trident in the right arm which shows that Shiva is the Ruler over the trinity of the three worlds (heaven, earth, hell), the trinity of time (past, present, future) and the three Gunas (Sattva, Rajas and Tamas). Holding the trident shows that Lord Shiva rules over all these dimensions. The Trishul also represents the 3 fundamental powers (Shaktis) of will (iccha), action (kriya) and knowledge (jnana).
Shiva’s Trishul has a threefold meaning for leading a happy and fulfilled life without tensions and worries: Tradition/Past – Thoughts/Present – Tomorrow/Future. TRADITION: Forgive and forget. Human beings have the tendency to remember the odd things and forget about the good things which have happened to them. Remember only the good things from the past and give up from the traditions and the past whatever is negative. Select the best parts of the tradition and remove what is not working for you. THOUGHTS & TRUST: Make positive declarations every day like „I am a winner, I am a Master, I am the best.“ Crying is emotional foolness. Cultivate positive thoughts and creation thoughts such as „I am creating fantastic right now.“ Believe and Trust in the divine. Manage your thoughts and live with awareness in the present. TOMORROW: See the positive, see the bright vision of tomorrow. Create a vision for the future.

Varda Mudra
Lord Shiva's right hand is held in the Varda Mudra and bestowing blessings to remove evil and ignorance and to give grace and awaken inner wisdom.

Third eye
Shiva is called “Tryambaka” or “Trilochana”, the three-eyed. He is often showed with a prominent third eye, which is a symbol for the realized divine consciousness and the absolute reality with which Shiva can see beyond the physical and material existence. According to mythology, Shiva had burnt Kama (God representing the sexual desire) to ashes with his third eye, which is symbolic for the power to remove the desires of the world. The three eyes of Lord Shiva also represent the sun as his right eye, the moon as his left eye and the fire, as Shiva’s third eye which symbolizes the fiery force to transform darkness and negativity in the world.

Crescent moon
Shiva is depicted with a crescent moon on his head and is called “Chandraśekhara”, “the one who is having the moon as his crown” (chandra = moon; śekhara = "crest, crown"). The moon signifies creation and creativity. The phases of the moon represent the cycles of creation from beginning to the end and new beginning, the constant creation and recreation.
Additionally the moon also symbolizes a cool and controlled mind.

Ash (Bhasma)
Shiva is said to smear his body with ashes (bhasma) and is hence called “Bhasmaanga Raaga”. It is symbolic for the renunciation from the materialism. Shiva has three white-lined Bhasma (or Vibhuti) on his forehead. It destroys illusions, desires, selfishness and the expectations for the results of our actions and purifies the heart.

Rudraksha
Shiva wears Rudraksha, the eyes (aksha) of Shiva, Rudra being another name of Shiva. It is said that wearing Rudraksha beads gives the protection of Lord Shiva. According to mythology Lord Shiva opened his eyes after a long time of meditation an prayer for humanity. When he opened his eyes he shed a tear when he saw the state of ignorance of the human beings. Out of Shiva’s tear a Rudraksha tree grew.
The Rudraksha necklaces worn by Shiva equally depict that he rules with the cosmic law in a firm way and thus maintains the law and order in the entire universe.

Serpents:
Shiva’s garland around the neck is a snake, generally a poisonous cobra. It symbolizes the negativity and impurity of the world, the suffering and the bondage of the cycle of birth and death. And yet, Shiva remains equanimous, unaffected and pure. It gives an example for how people have to learn how to filter thoughts, emotions, energies etc. of the world and not let negativity influence them anymore.


Attributes of Lord Vishnu
Conch (Shankha):
The conch is related to the sacred syllable AUM, the first sound of the creation. It requently associated with Lord Vishnu, the Preserver of the creation. “Shankh” is Sanskrit and literally means “pacifying the inauspicious” It is believed that the conch removes evil. The conch is also blown to invoke the divine, particularly in the form of Shiva. It is also believed that out of the conch the five elements water, fire, air, earth and space are evolved. Having a conch is considered bringing blessings, wealth and auspiciousness.

Discus weapon:
The discus weapon of Lord Vishnu/Krishna portrays the Sudarshana Chakra which is used as a protection from the evil. The Sanskrit word “Sudarshan” literally means “auspicious vision”.