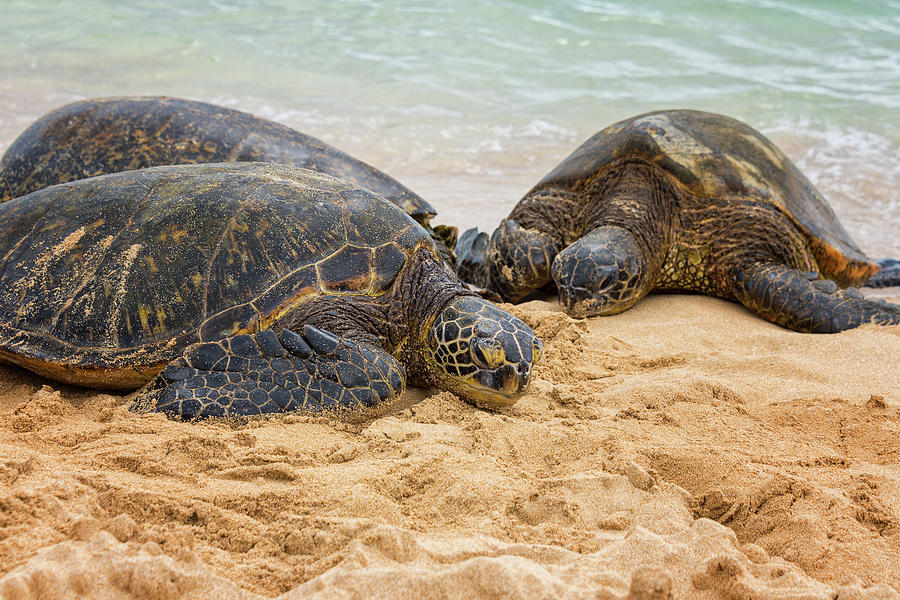 Hawaiian Green Sea Turtles 1 - Oahu Hawaii is a photograph by Brian Harig which was uploaded on May 2nd, 2013.

Join with me to save nature, one photograph at a time. Yes, it's true. With every item purchased, we plant ten trees in countries ravaged by deforestation. This project is saving the planet and empowering others to transform their communities through environmental, economic, and spiritual growth. Join the movement.

The green sea turtle (Chelonia mydas), also known as the green turtle, black (sea) turtle, or Pacific green turtle, is a large sea turtle of the family Cheloniidae. It is the only species in the genus Chelonia. Its range extends throughout tropical and subtropical seas around the world, with two distinct populations in the Atlantic and Pacific Oceans. The common name derives from the usually green fat found beneath its carapace.

This sea turtle's dorsoventrally flattened body is covered by a large, teardrop-shaped carapace; it has a pair of large, paddle-like flippers. It is usually lightly colored, although in the eastern Pacific populations parts of the carapace can be almost black. Unlike other members of its family, such as the hawksbill sea turtle and loggerhead sea turtle, the green turtle is mostly herbivorous. The adults commonly inhabit shallow lagoons, feeding mostly on various species of seagrasses.

Like other sea turtles, green sea turtles migrate long distances between feeding grounds and hatching beaches. Many islands worldwide are known as Turtle Island due to green sea turtles nesting on their beaches. Females crawl out on beaches, dig nests and lay eggs during the night. Later, hatchlings emerge and scramble into the water. Those that reach maturity may live to eighty years in the wild.

C. mydas is listed as endangered by the IUCN and CITES and is protected from exploitation in most countries. It is illegal to collect, harm or kill them. In addition, many countries have laws and ordinances to protect nesting areas. However, turtles are still in danger because of several human practices. In some countries, turtles and their eggs are hunted for food. Pollution indirectly harms turtles at both population and individual scales. Many turtles die caught in fishing nets. Also, real estate development often causes habitat loss by eliminating nesting beaches.

Congratulations Brian your amazing artwork is being featured in Over 5000 Views:-) Please take a moment to add your beautiful art to our archives in the message area and have a wonderful day!

Fantastic image and congratulations on your sale!

Congratulations! Your fantastic photographic art has been chosen as a Camera Art! You are invited to archive your work in the Features Archive thread! group as well as any other thread in which it would fit!

Congratulations! Your fantastic art is featured in the "Over 2000 Views" group. LF. Please archive the image in "Featured Images Archive & Thank You Thread"

So touching, Brian, nominating this beautiful image for a Special Feature in 1000 Views on 1 Image. F/L

Beautiful! Congratulations on your sale!

Congrats on your sale...

Congratulations You have been Featured in ‘Everything In Moderation, Including Moderation’ for your work of excellence in your medium! BRAVO TO YOU!!!

Congratulations on being featured in the Fine Art America Group "Artists for Nature.

Such a good picture

((Turtles Of The Sea Collections group))

Beautiful sea turtles you've photographed Brian:) I fix the problem with the group image. You're welcome to join/submit any time you like. Sea Turtle Collection group Debbie Chamberlin Administrator