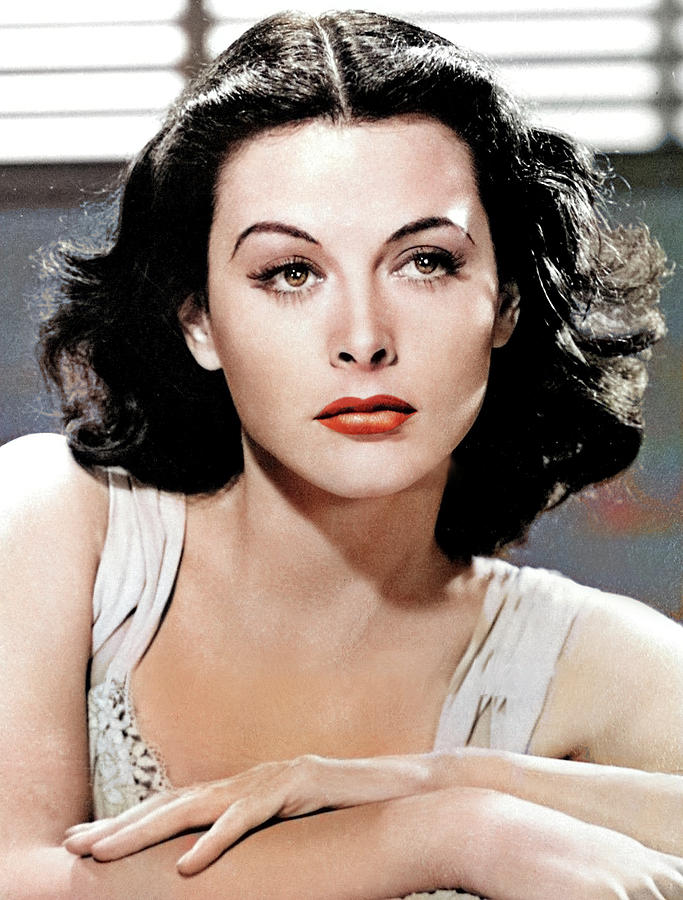 Hedy Lamarr publicity photo 1940 is a photograph by Stars on Art which was uploaded on March 9th, 2021.

Colorized publicity photo of actress Hedy Lamarr, for the 1940 film ''Comrade X''.
Hedy Lamarr (1914 - 2000) was an American actress and inventor. During her 28-year film career, she played in 30 films. She also co-invented an spread spectrum communication, which was adapted into today's wifi and Bluetooth.

Born in Vienna, Austria, Lamarr had acted in several European films in her early years. Unhappy in her marriage, she fled from her husband in 1937 and soon after met MGM head Louis B. Mayer, who was visiting Europe looking for new talent. Because he admired her beauty and personality, he signed her on as an MGM actor, promoting her as "the world's most beautiful woman".

After her first American film, "Algiers" (1938), she became a star. She subsequently co-starred with Clark Gable in "Boom Town" and "Comrade X" (both 1940), followed a role opposite James Stewart in "Come Live with Me" and "Ziegfeld Girl" (both 1941). She played Delilah in Cecil B. DeMille's "Samson and Delilah" (1949). In 1960 she was presented with a star on the Hollywood Walk of Fame.

Lamarr, along with friend and composer George Antheil, developed a radio guidance system at the beginning of World War II, which used spread spectrum technology, intended to be incorporated by the Allies to overcome the threat of jamming by the Axis powers.

While dating aviator Howard Hughes during the war, she helped him improve aircraft aerodynamics. Currently, spread-spectrum techniques are incorporated into Bluetooth technology with similar technology also used in wifi. Recognition of their work's value resulted in the pair being posthumously inducted into the National Inventors Hall of Fame in 2014.

Gal Gadot, star of "Wonder Woman," is set to portray Lamarr in an Apple TV+ limited series based on her life story. Several biographies of her life have been written: "Ecstasy and Me: My Life as a Woman," by Lamarr; "Hedy's Folly: The Life and Breakthrough Inventions of Hedy Lamarr," by Richard Rhodes; and "Beautiful: The Life of Hedy Lamarr," by Stephen Shearer.