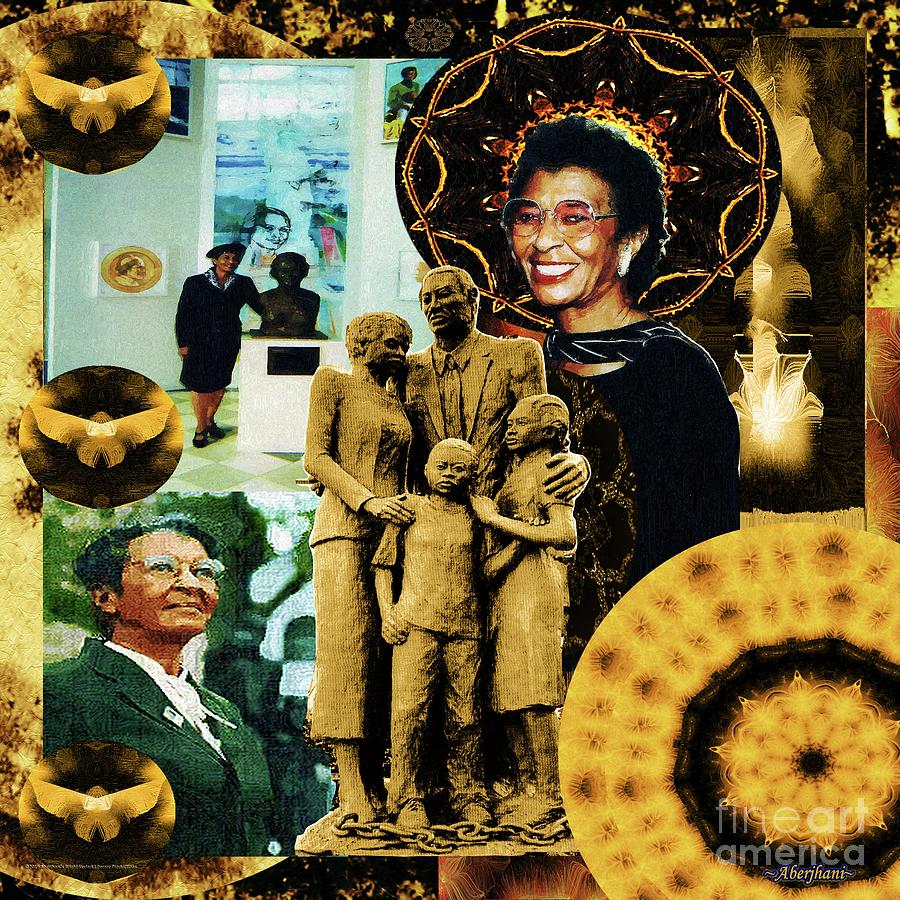 Historic Triumph of Dr. Abigail Jordan is a mixed media by Aberjhani which was uploaded on February 13th, 2019.

Prior to the unveiling of the African-American Family Monument on River Street in Savannah, Georgia, USA, on July 27, 2002, there were no public... more

Prior to the unveiling of the African-American Family Monument on River Street in Savannah, Georgia, USA, on July 27, 2002, there were no public artworks commemorating the contributions of African Americans to the city's rich history. The absence of such recognition was particularly glaring because of Savannah's more than 50 percent black population. It was also problematic because of the numerous statues and public sites dedicated to acknowledging the lives and values of slave-holders who had attempted to separate from the Unites States and form their own confederacy.

Dr. Abigail Jordan insisted on a more balanced public representation of Savannah's history and for a decade led the battle to construct the African-American Family Monument. She personally donated more than $100,000 to help get the job done. The monument, painted golden-bronze in my "Historic Triumph of Dr. Abigail Jordan" montage seen here, is now one of the most visited in the city.

Abigail Jordan died January 9, 2019. The essay I first wrote about her for my book, The American Poet Who Went Home Again, has been revised for a forthcoming volume titled: Dreams of the Immortal City Savannah. Although completely different from the originals, the oil and watercolor rendered images of Dr. Jordan seen in this artwork, with one exception, were modeled after photographs she gave me with permission to use them in works documenting her legacy. (I invite anyone responsible for any original, and who wishes to be acknowledged for it, to contact me.) In the upper left quadrant, she is standing next to a bust of civil rights icon Rosa Parks.

Fittingly enough, Abigail Jordan was born at the height of the Harlem Renaissance so I am honored to present this artwork during the 100th anniversary of the renaissance.

Aberjhani
Encyclopedia of the Harlem Renaissance
The Wisdom of W.E.B. Du Bois

Beautifully rendered mixed media . Story and tribute are remarkable One hundred thousand dollars of her own money to help to build the , African Family monument, demonstrates her love for justice . In a world filled with just words this action is one which we need to learn from and to repeat . VFL

A great lady she truly was Hanne, and one I was blessed to call my friend.

Magnificent collage and tribute to this great lady, Aberjhani! L/F

Amazing story and fantastic tribute Aberjhani! The works you create are thoughtful, meaningful and extremely powerful.

Appreciate those kind words very much Amy. Thank you.

Glad you enjoyed it Marcia. Thank you.

Thank you Jim. Appreciate that every much.

Thank you very much for checking it out Geraldine.

Much gratitude to the CONTEMPORARY art group for featuring this work in tribute to the late Dr. Abigail Jordan.

With today being the 1st of National Women's Month in the U.S., and with International Women's Day only a week away, I am particularly glad to have created & posted this piece.

A Marvelous piece you've have created! Very detailed and Excellent Executed! Love it a lot and your Gallery ~ Sincerely Cia ~ 🌷🌸🌷

Thanks tremendously for that Cia.

Appreciate that very much Jeff, Aaron, & Carol. Abigail Jordan was a very special person & I was honored to call her my friend.