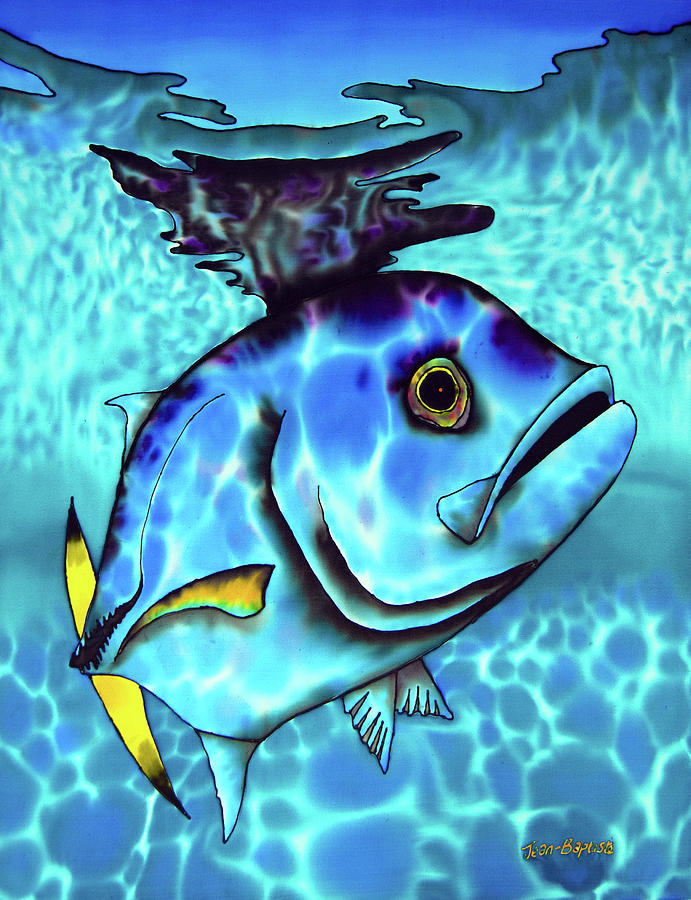 Horse Eye Jack Fish is a painting by Daniel Jean-Baptiste which was uploaded on July 12th, 2017.

The horse-eye jack (Caranx latus) is a gamefish and minor commercial fish in the family Carangidae. It is also known as the big-eye jack,... more

The horse-eye jack is a large fish, growing to a maximum recorded length of 101 cm and a weight of 13.4 kg, however is more common at lengths less than 60 cm. The horse-eye jack has a body form similar to other large jacks found throughout its range, with a moderately compressed elongate and deep body. The dorsal profile becomes more strongly curved anteriorly, however the forehead is less blunt than the crevalle jack. The eyes are large in proportion to the rest of the head and covered by a well-developed adipose eyelid, with the posterior extremity of the jaw vertically under or past the posterior margin of the eye. The dorsal fin is in two parts, the first consisting of eight spines and the second of one spine followed by 19 to 22 soft rays. The anal fin consists of two anteriorly detached spines followed by one spine and 16 to 18 soft rays. The lobes of the soft dorsal and anal fins are elongated, and the pectoral fin is falcate and longer than the length of the head. The lateral line has a pronounced and moderately long anterior arch. The straight section contains 32 to 39 very strong scutes, with bilateral keels present on the caudal peduncle. The chest is completely scaled. The upper jaw contains a series of strong outer canines with an inner band of smaller teeth, while the lower jaw contains a single row of teeth. The species has 22 to 25 gill rakers in total and 24 vertebrae are present. Like the crevalle jack, the horse-eye jack is known to develop hyperostosis in parts of its skeletal structure.
Adult horse-eye jack are typically dark blue to silvery-blue above, becoming silvery white to golden below.[11] In some individuals the tip of the soft dorsal fin lobe and the scutes may be dark blue to black. The caudal fin is yellow to dusky in color. Unlike the crevalle jack, there is no dark spot at the base of the pectoral fin, although but there may be dark spots on the gill covers. Juveniles exhibit a series of about five dark vertical bars on their flanks which fade with age.

I love this, happy fish, reminds me of my childhood fishing with my Father in the Gulf of Mexico. I love the colors and the feel of it.

Thanks, Pam, glad the piece has brought back happy memories.

I always enjoy your beautiful works! This one is absolutely fantastic, drawing me right in as if I am snorkeling just under the surface of the water with this fish. The light and water shadows dancing below and the surface reflection above. Absolutely fantastic and enjoyable. Thank you for sharing your art!

Thanks, Carlin, I am honoured that my work has caught your eye. I am taking batik to a higher level.

Daniel Jean-Baptiste, I thought I recognized your work. Wonderful, as usual!