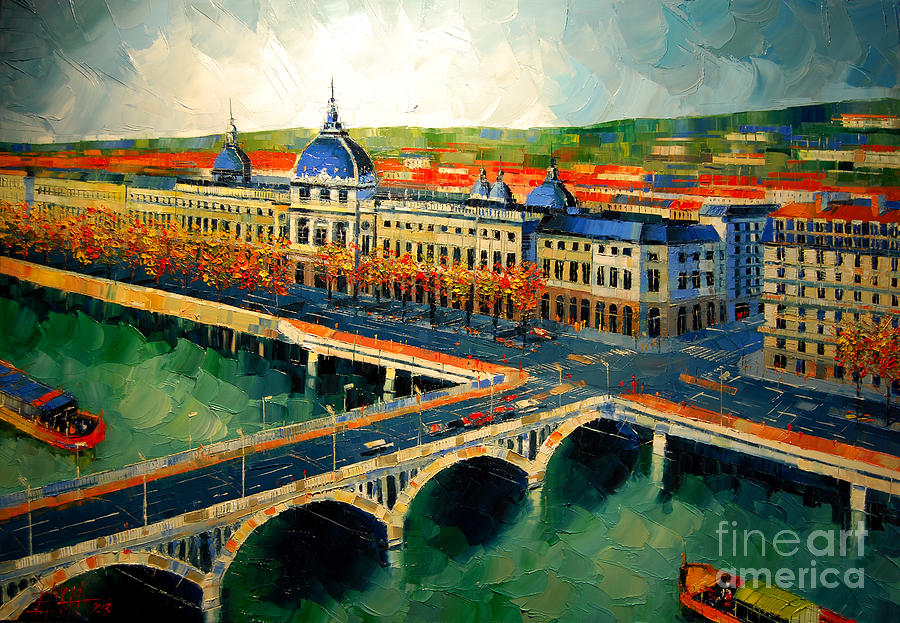 Hotel Dieu De Lyon II is a painting by Mona Edulesco which was uploaded on January 1st, 2014.

THE ORIGINAL OIL PAINTING ON CANVAS/ 45,6 x 31,8 x 1 inches HAS BEEN SOLD. PRINTS AND CARDS ARE AVAILABLE FOR SALE.
This is a work commissioned by an art collector in Lyon.

This is an oil painting representing one of the most beautiful and most important monuments in Lyon. This is part of a series of paintings from Lyon.

Hotel-Dieu de Lyon was a hospital of historical significance situated on the west bank of the Rhone river, on the "Presque-isle" (the Peninsula between the Saone and Rhone rivers which run through the city center). It has been out of use since 2010. First erected in medieval times, the building originally served as the "Confrerie des freres pontifes" (est. 1184), a pontifical meeting-place and refuge for both traveling and local members of the clergy. However, when the first doctor Maitre Martin Conras was hired in 1454, 'Hotel-Dieu' became a fully functional hospital, one of the most important in France. As Lyon was a city known for its trade and seasonal fairs, many of the early patients were weary travelers of foreign descent.
In 1532, 'Hotel-Dieu' appointed former Franciscan/Benedictine monk-turned-doctor and great Humanist Francois Rabelais, who would write his Gargantua and Pantagruel during his tenure here. Renaissance poetess Louise Labe lived just beyond the western limits of the building.
Massive expansion projects in the 17th century by Ducellet (under Louis XIII and Richelieu) and in the 18th century by Soufflot (under Louis XIV and Colbert) replaced the original building with the grandiose wings and courts we know today. In fact, at its greatest point, the hospital extended from its present position beyond Bellecour to engulf the area now occupied by the central post office. (source: Wikipedia)

Such an amazing painting my mom and me admiring your Art!! lfv :-)

Congratulations! Your art is featured on the front page of art group "COMMISSIONED WORK"

Stunning painting Mona, you also have a very good eye in choosing the viewpoint in your paintings and your usage of color is just perfect. Excellent!. Michael L/F and follow.

Fabulous, Mona! your style is Alive! these colours sparkle with Light & Depth:))

Superbe work, Mona! The colors are fantastic!/I love the composition to! LF

Speechless, this is just .... well it's leaving me speechless!!

This is so impressive, Mona. It just might be my very favorite of all your work. It probably was one of the most time consuming works you have done ( Am I right? ) You see I really appreciate meticulous rendering at times and this really showcases the pinnacle of your talent and ability. Outstanding in every way, Mona!.............FAV / Like

Thank you so much Jerry!! You are right you know, it was consuming now that I think... :) especially because of the large format. Otherwise I really enjoyed to paint it!

Thanks a lot Odd!

Another vote plus tw. I just Love this!!!

Thank you very much Lenore!

This one keeps drawing me back.. so amazingly gorgeous.

Thank you very much Wayne!

Thank you so much, Dimitra!

i envy ur talent, in a good way. i can spend hours going through the detail in every picture. U got great talent. i love oil colors too, but got to learn lots. Any tips? ;-)

Thank you so much, Lalhmunlien! :) ...I can say two words: passion and work.

Really love the way you painted this scene Mona! The colors, texture, and composition are amazing, and I especially love the feel of the light! Just Beautiful!! F/V

Thank you so much, Bill!

always wonderful to see your art

Thank you so much, Gerald!

Thanks so much Graciela!