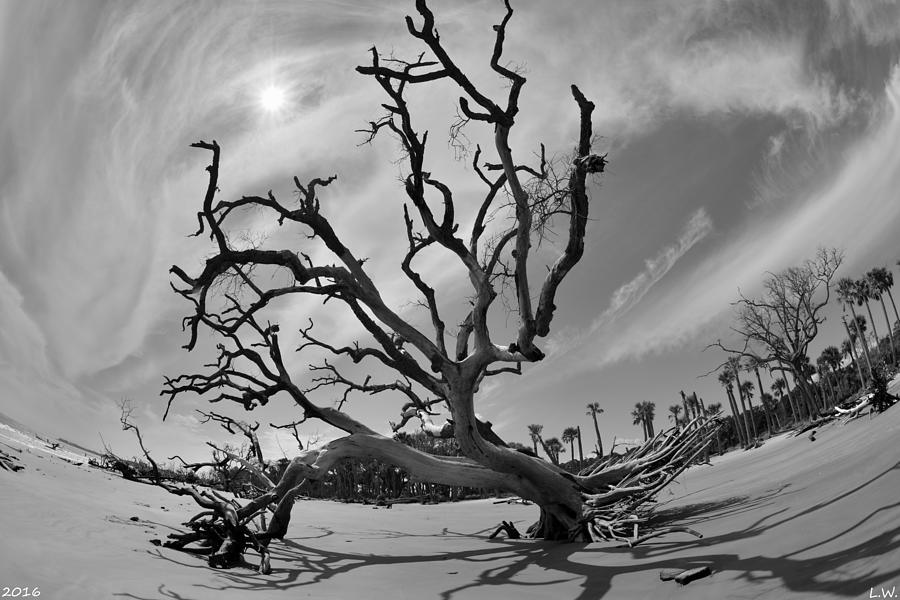 Hunting Island Beach And Driftwood Beaufort SC Black And White is a photograph by Lisa Wooten which was uploaded on November 6th, 2016.

Hunting Island is a 5,000-acre (20 km2) secluded semitropical barrier island located 15 miles (24 km) east of Beaufort, South Carolina, United States. Since 1935, it has been classified as a state park. It is the most-visited state park facility in South Carolina and is a part of the ACE Basin estuarine reserve area. Renowned for its natural beauty, the island remains one of the few remaining undeveloped Sea Islands in the Lowcountry. The park is known for its 19th century lighthouse which bears its name. The park's unique beach has been featured in several travel publications and was listed in 2013 as a Top 25 beach in the United States by TripAdvisor.[3]

A campsite at Hunting Island
The southern terminus of U.S. Route 21 has been on Hunting Island since 1953. US 21 extended to the south end of the island until about 1980, when erosion destroyed a portion of the highway, forcing the state to create a new entrance to the park and a set of one-lane roads through the palmetto forest. US 21 now ends at the point where it formerly veered east toward the lighthouse.
Since 1980, Hunting Island has suffered major beach erosion as a result of heavy tides from the confluence of the Atlantic Ocean and Saint Helena Sound, and is expected to shrink in size by ten per cent over the next forty years. At times there is ride-able surf on the island, which is best three hours before high tide due to the large continental shelf effect on incoming waves.
In 1993, most of the Vietnam scenes in Forrest Gump were filmed on Hunting Island and neighboring Fripp Island.

The Marsh Boardwalk at Hunting Island
Wildlife[edit]
The wildlife includes loggerhead turtles, deer, alligators, raccoons, diamondback rattlesnakes, and hundreds of species of birds. The island has an abundance of herons and egrets, as well as summertime sightings of the painted bunting. The interior lagoon (which was created by sand dredging in 1968) has become naturalized and home to such species as seahorses and barracuda.
Each summer Loggerhead Turtle hatchlings emerge from the sand and walk out to the ocean. Around 60 and 130 nests are laid annually on the beach. A volunteer organization, the friends of hunting island has a permit from the SC Department of Natural Resources to find and protect the nests. Each morning during nesting season, volunteers walk every mile of the beach to help find and protect nests.
Facilities[edit]
Hunting Island provides locations for recreational vehicles and tent campers on the northern portion of the island. All but one park's cabins have been destroyed in recent years due to high beach erosion. A 2-mile-long (3.2 km) lagoon is adjacent to a washed-out cabin road and serves as a popular location for fishing.
Hunting Island Visitors Center is located in the middle of the island, overlooking a small lagoon. The center provides general information on the island, and has space for activities and offices for park staff. The center is also connected with Hunting Island's extensive trail system and is a short distance to several beach access points.
The Hunting Island Nature Center features live animals and exhibits about the habitats and history of the park. The center is located at the entrance to the Paradise Pier fishing pier, which juts into the Fripp Inlet between Hunting and Fripp Island.
The lighthouse is open year-round to the public. Visitors are able to climb to the viewing deck of the 136-foot-tall (41 m) tower for a nominal fee.
Hunting Island's 4 miles (6.4 km) of beachfront provide a pristine, natural experience for visitors. Although the beach is heavily eroded towards the southern end of the island, ample shore remains in the central section and in the campground areas towards the north end.
The state park also features several trails for hiking and biking, including a 6.1-mile (9.8 km) loop trail that cuts through the maritime forest and along the lagoon. The trail also connects to the Marsh Boardwalk, a popular stop for photographers. A short 5-minute walk leads visitors across a section of marsh onto a hammock and towards a deck along a tidal creek. Wikipedia

In addition to the banner, I am adding this more permanent recognition of its FEATURE on the homepage of A TREE OR TREES IN BLACK AND WHITE. I try mightily to feature only images that would be at home in a juried competition. No doubt that this image fits that bill. CONGRATULATIONS!

Lisa, Great black and white image of this driftwood on the beach love the great use of your lens

A fantasy view of the island! L/F

Dramatic and intense, with a hint of vertigo. l/f/tw