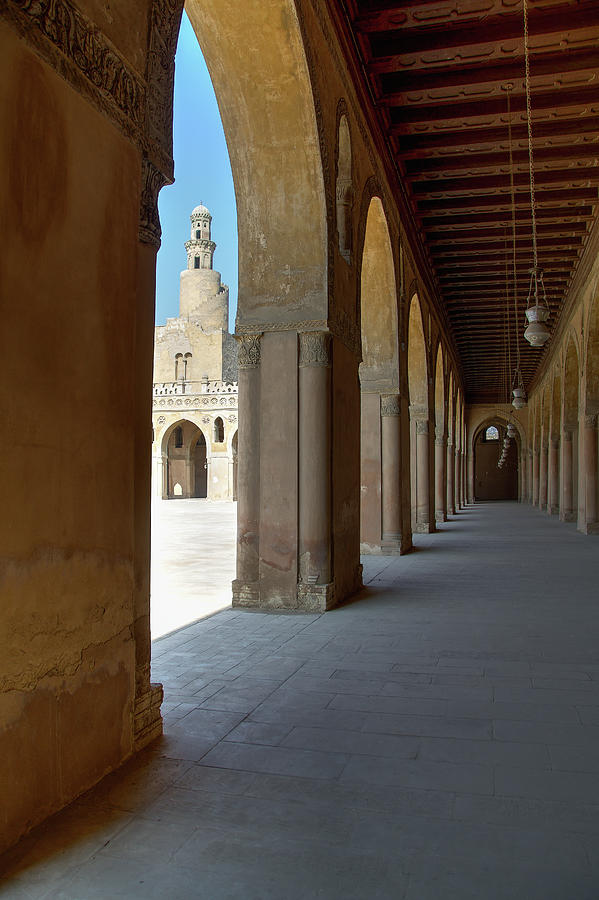 Ibn Tulun Great Mosque is a photograph by Nigel Fletcher-Jones which was uploaded on March 22nd, 2017.

Ahmad Ibn Tulun (835-884) was the son of a Turkic slave and was raised at the Abbasid court in Samarra. Through both luck and talent, Ibn Tulun rose... more

Ahmad Ibn Tulun (835-884) was the son of a Turkic slave and was raised at the Abbasid court in Samarra. Through both luck and talent, Ibn Tulun rose through the courtly ranks until, at the age of 33 (in 868), he was appointed governor of Egypt. His own military success and the growing weakness of the ‘Abbasid caliphs led Ibn Tulun to form an independent sub-kingdom consisting of Egypt, Palestine and Greater Syria in 880.
As early as 870, Ibn Tulun began to build his capital of al-Qata’i', in the shadow of the Muqattam Hills, and to the northeast of the first two Islamic capitals of Egypt, Fustat and al-Askar.
The great mosque was built between 876 and 878, and made impervious to earthquake or flood by being constructed directly onto the bedrock of the limestone hill of Gabal Yashkur.
The builders of al-Qata’i’s monuments may have expected that their splendid city would last forever, but, after just 35 years as the capital of Egypt, it was almost entirely destroyed over a four-month period in 905 by the Abbasid general Muhamad Sulayaman al-Katib.
The mosque of IbnTulun is the only part of al-Qata’i’—except for a few miserable remnants of the aqueduct—to have survived to the present. Yet it is entirely fitting that this lost city should live on through its greatest monument as, in deed, Ibn Tulun, believed it would.
For, as the fourteenth-century Egyptian historian Ibn Duqmaq, noted: “ (Ibn Tulun) said that he wished to build a structure that if Misr was burned down it would survive, and if it were inundated it would survive.”