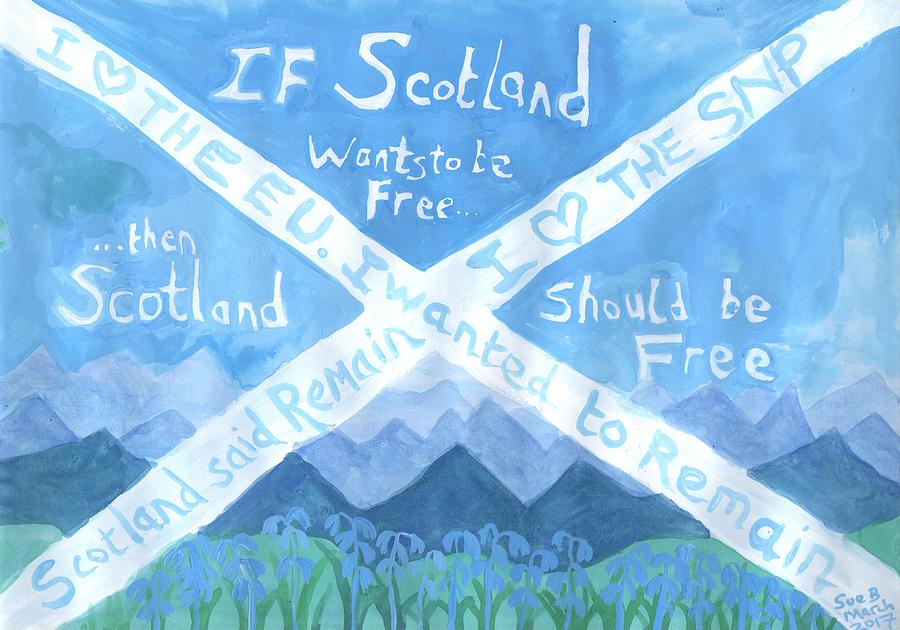 If Scotland Wants To Be Free is a painting by Sushila Burgess which was uploaded on March 19th, 2017.

If Scotland Wants To Be Free

The Scottish flag, adorned with admittedly romanticised details such as blue mountains and bluebells, and with a comment on the question of Scottish... more

If Scotland Wants To Be Free

The Scottish flag, adorned with admittedly romanticised details such as blue mountains and bluebells, and with a comment on the question of Scottish independence: "IF Scotland wants to be free, then Scotland should be free," Note the big capitalised "IF". I am not trying to tell any Scottish person what they should do, I am saying IF that is what Scotland wants then who is Theresa May to block them, and at the same time expressing my own emotional gut reactions: an ongoing, never-ending scream of pain about the Brexit vote. I admire Scotland very much for voting to Remain, and I wish my own country, England, had done the same. But this image is not wholly the comment of an outsider. I do love Scotland. My late father spent the last forty years of his life in Scotland, and I often visited him there, though I have never been back since his death in 2004. To me, Scotland is like my lost and beloved father. He was not Scottish himself, he was an Indian medical researcher, and even to me, his daughter, his accent was an almost impenetrably thick mix of Bangalore and Glasgow... especially when he took his false teeth out! He contributed a great deal to Scotland, saving many Scottish lives by his research. I feel very emotional when I think of Scotland. The Scottish accent often makes me feel a flood of warmth and longing. I wish I could be a Scottish citizen if you do gain independence, but I know I can't. But dear Scotland, I wish you all the best, whichever path you choose to follow.